Richard Burton was born on 19th March 1821 in Torquay, Devon and his wife Isabel was born on 20th March 1831 in London. I wonder if they held joint celebrations each year? The pair were the subject of my part of the recent lecture at the RAS and have been highlighted in previous blogs. They were both intrepid travellers and prolific writers and their lives have been well documented by themselves and many biographers. 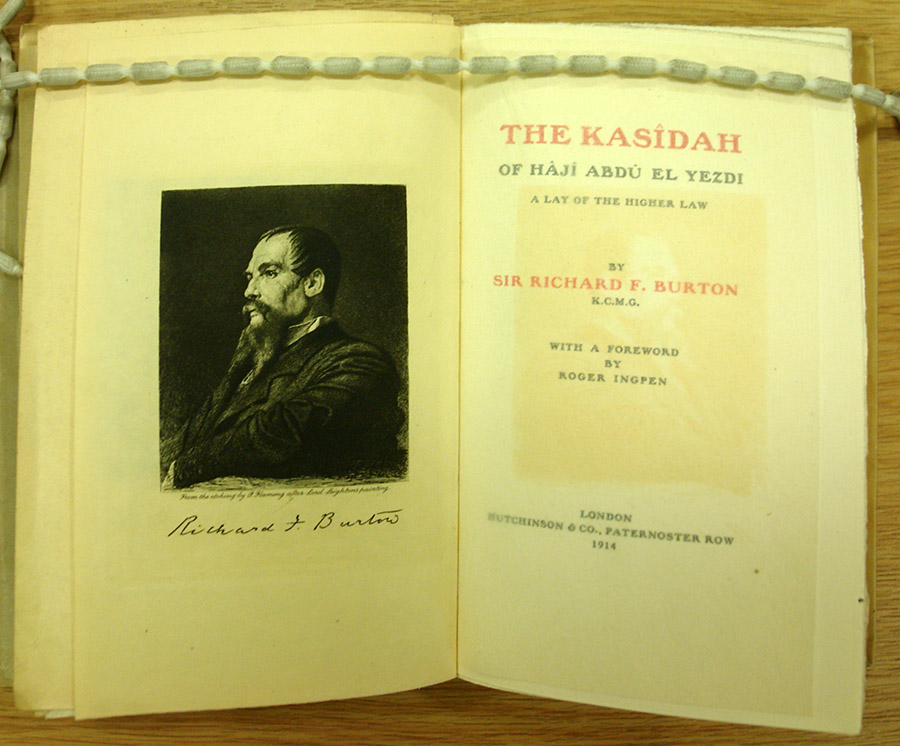 Today (21st March) is World Poetry Day. The picture above of Richard Burton is in his book, The Kasidah, a long English-language poem written by “Hâjî Abdû El-Yezdî” – a pseudonym that Burton adopted so it could appear that he had translated the poem from a Persian text. This is typical of Burton’s swagger and style, so I would guess that any birthday parties he might have held might well have been riotous occasions.

20th March also marks the birthday of James Tod, who was born in London in 1782. He featured in the last blog as the first librarian of the RAS. Tod joined the East India Company in 1799 as a cadet in the Bengal Army, rising quickly through the ranks. After the 3rd Anglo-Maratha Wars during which Tod was involved in the intelligence department, he was appointed Political Agent for some areas of Rajputana, commissioned to help unify the area under East India Company control. During this period Tod conducted much of his research. Tod was initially successful in his official role, but his methods were questioned by other members of the East India Company which meant that his influence declined. In 1823, Tod resigned his post as Political Agent and returned to England. Newly returned from India, we might guess that Tod must have been pleased to join with Colebrooke as a founder member of the RAS.

Tod married in 1826 and travelled on the continent with his new bride, Julia, daughter of Dr Henry Clutterbuck, a London surgeon. In 1829 Tod published at his own expense the first volume of Annals and Antiquities of Rajasthan, with the second volume produced in 1832.. It was Tod’s cousin, Patrick Waugh (1788-1829), who provided the topographical illustrations for the Annals – his watercolours were redrawn in England by professional artists to be engraved by Edward Finden. The following pictures, within the RAS Collections show how this process copied and altered the original. The first picture was much larger (25.6 x 37.3cm) than either its copy or engraving (13.7 x 20.4 cm)

Tod presented some material to the RAS but the bulk of both his pictures and manuscripts came into the Society in 1851, some sixteen years after his death. They provide a rich resource for researchers and enthusiasts alike and we are grateful to the many people through our Society’s history who have spent time sorting and cataloguing the material.

This half-length portrait, depicting the Earl in the robes of a peer of the realm, was painted by James Atkinson, a surgeon but also a talented artist who spent time in India and Afghanistan. Munster, the illegitimate son of William IV, also spent time in India, fighting alongside the Marquess of Hastings, Under cessation of hostilities in the Maratha War he was selected to travel overland with news of the peace. The journal he kept of his journey, Journal of route across India, through Egypt to England, was published in 1819 and was illustrated with engravings taken from his own sketches. We have a copy of this book in the Library.

Munster was also one of the original members of the RAS. becoming a Member of the Council in 1825, Vice-President in 1828 and President in 1841. He sadly committed suicide in 1842 and therefore we have to hope that is was not pressures of Presidency that helped precipitate his demise.