With Library services closed for the time being, I thought I would take the opportunity to enrol myself on some online courses to improve my skills and knowledge. A course that particularly stood out was the ‘Japanese culture through rare books’ course on Future Learn. As I have an interest in the history of rare books and bookbinding, I was curious to learn about the evolution of scripts and materials used in traditional Japanese books and the important role that books have played in the cultural history of Japan.

This also links to a Japanese album of prints that we hold in the society’s collections from the mid-19th century. These are mainly theatrical prints which were presented by Herbert Charles Fanshawe to the society in December 1923. 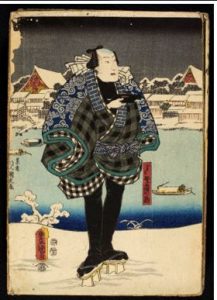 A selection of digitised Japanese theatrical prints in our collection. More of these can be seen in our digital library at: https://royalasiaticcollections.org/collection/japanese-theatrical-prints/

Each print is unique in its own right and they not only provide insights into printing techniques and technologies that were being used at the time but also the development of Japanese culture and education.

This week I have been learning about the history of writing in Japan and the types of paper used in Japanese book making. I was interested to learn that ancient Japan did not have its own writing system and it evolved from the Chinese script and characters known as the ‘kanji’.’ However, the beginning of the 9th century marked a pivotal transition for the development of Japanese language with the syllabic writing systems the ‘hiragana’ and ‘katakana’ being created out of the kanji. This would allow the Japanese people to have greater freedoms in writing their own language and make writing less time consuming. However, different versions of these systems existed for a number of centuries and it was not until the 18th century where a more standardized system was implemented.

Examples of the hiragana writing system underlined on the course: https://www.futurelearn.com/courses/japanese-rare-books-culture

Following this module, I moved on to learning about the types of paper used in Japanese bookmaking. This section introduced me to the various plants used to make paper and how the different fibres can impact on the type of paper that is created. The first plant that was widely used was the hemp plant which became known as mashi paper. This was mainly used in the Nara period of Japan (710-794). However, in the Heian period, the mulberry plant replaced this as the preferred method for paper making and created choshi paper. As this is easy to process it is one of the most popular varieties for Japanese paper making. However, the longer fibres of this paper means that it is not as good for double-sided writing as ink can penetrate through the paper easily. This led to the development of the hishi paper, which was made from the gampi plant. The character ‘hi’ means beautiful and the paper lives up to its name as it is more luxurious and difficult to cultivate. Its shorter fibres create a much heavier and thicker paper which is good for double sided writing. Lastly, I was introduced to mitsumata paper which is made from the Edgeworthia chrysantha. Its usage became more widespread in the mid-18th century and is a cheaper substitute for hishi paper.

Next week I am looking forward to being introduced to Japanese binding methods and the practice of reformatting. If you are interested in finding out more about the course this can be found at: https://www.futurelearn.com/courses/japanese-rare-books-culture A bonus is that the course is completely free for a month and it involves just setting up an account with them.

On Wednesday, the Society’s Librarian, Edward Weech, gave a Zoom lecture for the members of the Athenaeum Club, titled ‘Enlightenment and Romanticism in the Collections of the Royal Asiatic Society: the Case of Thomas Manning (1772-1840).’ Having been postponed from its original date in July, the talk provided an opportunity to reflect on some of the major intellectual movements which helped drive the founding of the RAS and myriad other literary and scientific institutions in the same period. Several RAS founders – including our first Director, Henry Thomas Colebrooke – also played a key role in setting up the Athenaeum and many eminent scholars today belong to both institutions.

A reminder that the society is holding a virtual book launch of The Ka’ba Orientations by Simon O’Meara on Monday the 16th November. The deadline for signing up is today so if you would like to attend please email Matty Bradley at mb@royalasiaticsociety.org. Lastly but certainly not least, the society is holding its rescheduled collections evening on the 25th November. This will involve presentations from placement students and showcase the fantastic work they have carried out on the collections over the last year.