This week’s blog post is written by the Executive Editor of the Journal of the Royal Asiatic Society, Charlotte de Blois and a recent publication that has been written about the Anglo-Welsh philologist and founder of the Asiatic Society of Bengal (1784), Sir William Jones.

When one prepares an article for typesetting and publication one can get totally immersed in its content. Today I emerged from proofreading a long and unusual piece which will be published on First View before Christmas for you all to read.  It is ‘Building a Library: The Arabic and Persian Manuscript Collection of Sir William Jones’ written and researched by Jonathan Lawrence.

As Fellows of the Society will know, Sir William Jones was an inspiration to our early Fellows, even though he died nearly 30 years before our Society was founded. Born in 1746 in Wales he was lucky enough to have been exposed to two languages from birth, English and Welsh. According to Edgeton he was competent in a further 26 languages by the time of his death in 1794 at the age of 47. Bearing in mind that Jones acquired his prodigious linguistic knowledge over 250 years ago, before the invention of techniques to record the human voice, it can only be those of an unquestioning frame of mind who will fail to ask the question “How on earth did he do it?”

In Line 49 of his article Jonathan Lawrence writes, “Jones required physical books. This simple fact has long gone under-acknowledged in discussions of Jones’s scholarship”.  Lawrence then explains which books and manuscripts Jones acquired, how he acquired them and to a certain extent how the materials which he successfully procured influenced the evolution of this thoughts. We hear about the provenance of each manuscript and in so doing we are exposed to a description of his scholarly networks and connections. This is a reminder that the milieu of knowledge production typical of the early twentieth and early twenty first century which centres upon universities, university libraries and published monographs and journals is relatively new. We should find this reassuring as we transition into a world where online interest forums, open access and electronic publishing are playing a greater and greater role.

Readers can access the titles and abstracts and in some cases texts of the Journal of the Royal Asiatic Society’s material on FirstView by visiting Cambridge Core at: https://www.cambridge.org/core/journals/journal-of-the-royal-asiatic-society/all-issues

In other news, The Royal Asiatic Society and The Islamic Art Circle present a virtual book launch of ‘The Ka’ba Orientations: Readings in Islam’s Ancient House’ by Simon O’Meara. With a discussion by the author Simon O’Meara and Andrew Peterson, the book explores the most sacred site of Islam, the Ka’ba and how it functions architecturally and represented culturally. If you are interested in joining please email Matty Bradley at mb@royalasiaticsociety.org. We look forward to seeing some of you there! 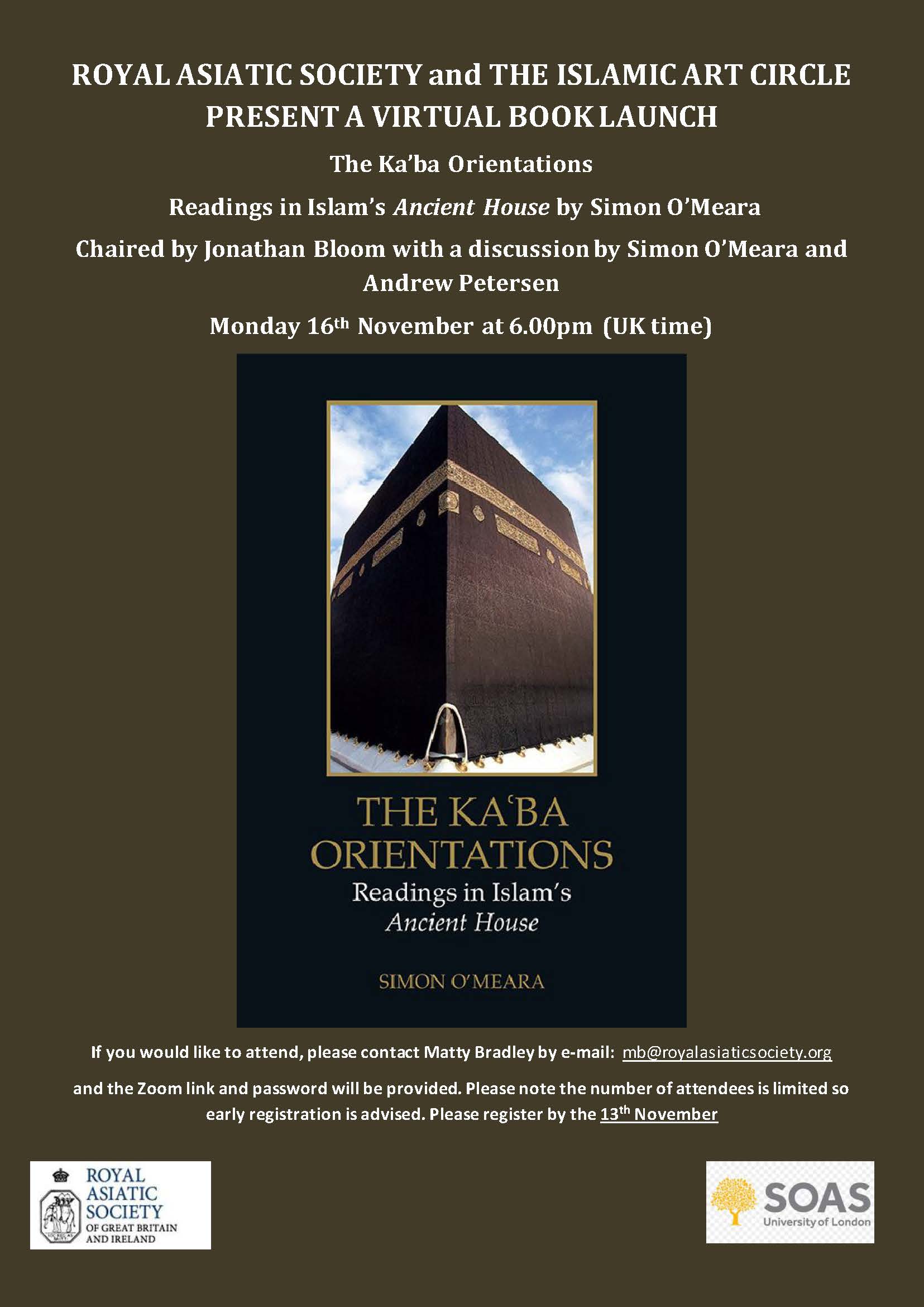 Due to the latest government restrictions in place, we have currently suspended our reading room service until further notice. Whilst it is disappointing to have to reduce our services again, we are able to respond to email enquiries and our virtual collections evening on the 25th November 2020 will still go ahead as planned. With three former placement students discussing the fascinating preservation work that they have been carrying out on the collections, it is an event not to be missed! 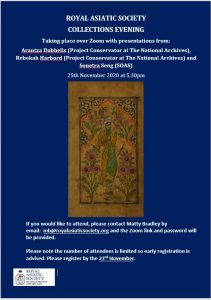