The JRAS editorial team is very pleased to announce that Volume 30’s third issue is a Special Issue, entitled ‘Historicizing Sayyid-ness: Social Status and Muslim Identity in South Asia’, which is guest-edited by Dr Laurence Gautier and Dr Julien Levesque.  In it, contributors explore changing conceptions of ‘Sayyid-ness’ in various historical contexts in South Asia, and, in so doing, collectively challenge essentialised understandings of what a Sayyid identity has meant in that part of the world. This issue is now available online for RAS Fellows and will be followed by the print issue in a few weeks.

Fellows, however, may be particularly interested to learn that one of the key individuals discussed in this Special Issue—Sayyid Ahmad Khan (1817-98)—was himself a member of the Royal Asiatic Society for much of the second half of the nineteenth century.  The 1866 issue of the JRAS, for instance, lists him as an Honorary Member, based in Ghazipur in the United Provinces (India).  ‘Sir Syed’, as contemporaries often referred to him following his knighthood in 1888, had moved to Ghazipur from Moradabad in 1860:  it was there that he set up a personal printing press, an English medium school and a ‘Scientific Society’, before launching his more famous educational initiatives centred on Aligarh, much closer to Delhi.  His death was first reported in the July 1898 issue of the JRAS, and then formally recorded in the ‘Report of the Council for the Year 1898’ (July 1899).

A second very prominent Indian Muslim actively associated with the Society (who is also referenced in this Special Issue) was Syed Ameer Ali (1849-1928), who following a career as a judge in colonial service retired to England, where he had studied as a young man.  According to his obituary (by A. Yusuf Ali) published in the JRAS in October 1928, he had been elected a member of the Society in 1904, and then became a member of Council (1907-11; 1915-18) and Vice President (1911-15).  As Yusuf Ali, put it, to “the courtly manners of a cultured Muslim gentleman”, Syed Ameer Ali had added “a powerful intellect and absorbing love for Islam”, his loss consequently resulting in “a big gap in Muslim learning and public life”.  But digging into earlier issues of the Journal (now happily available via jstor.org as well as other online archival repositories) unearths a passing reference in 1877 to a non-residential member by the name of “Moulvi Syed Ameer Ali, MA, LLB”.  It would seem likely (considering that he had spent time in London between 1869-73, when he was called to the Bar at the Inner Temple) that Syed Ameer Ali’s association with the Society goes back further than his official (re)appearance as an active member in the early decades of the twentieth century might suggest.

Either way, however, the direct connection between the Society and two of the best-known Indian Sayyids to engage with the challenges that British colonial rule posed to South Asia’s Muslim communities makes it, we feel, appropriate that the JRAS should be publishing this Special Issue.

Professor Sarah Ansari (Royal Holloway) also featured on Monday 17th August when the Society hosted the launch of her and Professor William Gould’s (University of Leeds) new publication, Boundaries of Belonging: Localities, Citizenship and Rights in India and Pakistan (CUP, 2019).  The book discusses the impact of the 1947 Partition on citizenship and rights in India and Pakistan particularly in Uttar Pradesh and Sindh. Drawing on substantial archival accounts and fieldwork, the discussion focuses on what partition meant for ordinary people questioning the stereotypes of an increasingly ‘authoritarian’ Pakistan and ‘democratic’ India suggesting the differences between them are overstated. 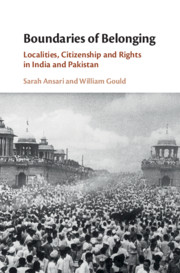 The session was ably chaired by Dr. Taylor Sherman (LSE) and the panel began with a discussion of the book by the authors. The points raised by Sarah and William were then further elaborated by the discussants  Professor Ali Usman Qasmi (Lahore University of Management Sciences) who is a leading historian of Muslim South Asia whose recent publications focus on the transition from the colonial to the post-colonial period in the context of Pakistan and Professor Rohit De (Yale University) whose research focuses on South Asian legal history and comparative constitutional law, including a break-through study of the everyday life of constitutional law in the first decade of independent India. A recording of the zoom event is available.