This week, we are indebted again to “Henry Colebrooke” for our blog post:

According to the inscription on the verso of the above painting, it shows my friend James Tod making his way from Udaipur to his country retreat in the village of Dabok (a.k.a. Mairta) in the Aravalli Hills above Udaipur on the 9th of October 1821 (on this date, more anon). I am pleased to note that in this painting Tod is depicted in his familiar top hat, and he is with his usual military escort of half a troop of Skinner’s Horse, the ‘Yellow Boys’. The inscription on the recto of the painting also notes that Tod is accompanied by his most trusted native informant, Gyanchandra. A learned Jain yati (or lay cleric), Gyanchandra joined Tod in his antiquarian pursuits for over a decade from circa 1810–12, when he first entered Tod’s service, until December 1822, when the two finally parted company prior to Tod’s departure for England. Tod frequently reminisced with me about this man, to whom he habitually referred as ‘my friend’ or ‘my guru’, and I am mindful of the following appreciation of Gyanchandra that Tod included at the conclusion to his Travels in Western India:

“My friend and tutor, ‘the moon of intellect’, the Yati Gyanchandra, who had been with me from my subaltern days, and who, during more than half the period of my sojourn in India, was one of the great comforts of my exile. He is often mentioned, in these pages and elsewhere, and [is] in fact identified with all my antiquarian labours… He enjoyed as much as I did these ramblings in search of the relics of past days, and to his great historical knowledge, and patience in deciphering inscriptions, I am indebted for my chief discoveries.”

The single most important project which the two undertook together was a translation of the Prithvīrāj rāso, the Rajasthani poem attributed to Chand Bardai, recounting the epic struggles between the eponymous Rajput king and Muhammad Ghuri, the Afghan warlord, who went on to establish the Delhi Sultanate in 1206. Tod and Gyanchandra started to translate the rāso in June  1818 in Udaipur’s Rampyari-ki-bari (the famous pleasure-garden-cum-artillery-park where Tod established his first Residency) and they continued to work on it together intermittently until the monsoon months of 1822, which they spent together in Baroda. These translations, consisting of about a third of the poem’s 100,000 stanzas, occupy five large volumes that remain in the Royal Asiatic Society’s archive of Tod material.

Tod recounted the collaborative nature of their working method in this translation project in the following manner:

“To read this poet [Chand Bardai] well is a sure road to honour, and my own guru was allowed to excel therein. As he read, I rapidly translated about 30,000 stanzas. Familiar with the dialects in which it is written, I have fancied that I seized occasionally the poet’s spirit; but it were presumption to suppose that I embodied all his brilliancy, or fully comprehended the depths of all his allusions. But I knew for whom he wrote. The most familiar of his images and sentiments I heard daily from the mouths of those around me, the descendants of the men whose deeds he rehearses: I was enabled thus to seize his meaning where one more skilled in poetic lore might have failed.”

Tod’s native artist Ghasi captured well this modus operandi in another painting of Tod in which he is seen taking dictation from Gyanchandra.

Yet I must point out that this painting by Ghasi raises the suspicion that Gyanchandra was doing more than simply reading aloud to Tod, and we might wonder if he had a greater influence on Tod’s work than even Tod himself would admit. For one, there is the small matter of which of the several recensions of the Prithvīrāj rāso that were available would be translated. Tod collected several different versions of the rāso (which he ultimately bequeathed to the Society). And we note that the specific recension of the rāso that Tod and Gyanchandra translated told the story of ‘the last Hindu emperor of Delhi’ from a perspective that privileged the critical heroism of Maharana Samar Singh of Mewar. The specific Mewari lens through which Tod came to understand Rajasthan may have had much to do with his ever-present companion who hailed from this region. I am informed by the editors of the Society’s forthcoming anniversary edition of Tod’s Annals and Antiquities of Rajasthan that they will have much more to say on this topic in that forum.

Before bringing this instalment of my blog to a conclusion, let me say a few words about Tod’s ‘bungalow’ at Dabok, Tod’s destination in the above painting. Although Tod initially made his residence in the gardens of Rampyari in the city of Udaipur, in 1819 he began to chalk out a new Residency for himself in the hills above the city, some 12 miles distant. He conceived this bungalow as a type ‘country seat’ idyll, complete with extensive botanic and kitchen gardens, including orchards on-site, and facilities for sporting pursuits, such as fishing, sailing and shooting, nearby.

Tod wrote rapturously of his new residence in his ‘Personal Narrative’ when he visited the site in March 1822:

“I halted a few days at Mairta [i.e. Dabok], and found my house nearly finished, the garden looking beautiful, the aroo or peach tree, the seo or apple, the suntra, narinji, and nímboo, or the various orange and lime-trees, all in full blossom, and showing the potent influence of Surya [the sun] in these regions: the sureefa or seetáphal (fruit of Seeta), or custard apple, and anár, the kélá, pomegranate, plantain, and various indigenous fruits, were all equally forward. These plants are mostly from Agra, Lucknow, or Cawnpoor; but some of the finest peaches are the produce of those I planted at Gwalior,– I may say their grandchildren. When I left Gwalior in 1817, I brought with me the stones of several peach-trees, and planted them in the garden of Rung-péâri, my residence in Oodipoor; and more delicious or more abundant fruit I never saw. The stones of these I again put in the new garden at Mairta, and these again exhibit fruit, but it will require another year to prove whether they maintain the character the held in the plains of Rarew, or in this city. The vegetables were equally thriving: I never saw finer crops of Prussian-blues, of kobis, phool-kobis, or cabbages and cauliflowers, celery, and all that belongs to the kitchen-garden, and which my Rajpoot friends declare far superior to their indigenous race of sáe, or greens: the Déwánji (Rana) has monopolized the celery, which he pronounces the prince of vegetables. I had also got my cutter for the Oodisagar, and we promised ourselves many delightful days, sailing amidst islets and fishing in its stream.”

Given the roots that Tod was quite literally putting down in Dabok after some 23 years continuous residence in India, it is likely that he would have preferred to see out his days in Rajasthan had his health permitted. Alas, a series of seizures forced him to abandon these plans and return to England in 1823. I know from my conversations with him and his letters with his few good friends that he was never able to settle well at ‘home’ and kept close friendships only amongst those who had extensive experience in India.

A note on the inscription on the painting of Tod and Gyanchandra on their way to the bungalow at Dabok:

My dating of this journey to Dabok (9 October 1821) requires some explanation. Below I include a reproduction of the inscription, a transliteration, and a translation. The last numeral of the inscription on ln. 3 is obscured and below it has been written 1822. This is probably because the Vikram Samvat year has been rendered as 1879. This V.S. date, however, is most likely a scribal error and should read 1878. I have consulted my panchanga and I notice that V.S. 1878 Ashvin Shuklapaksha 13 corresponds to 9 October 1821. By contrast V.S. 1879 Ashvin Shuklapaksha 13 corresponds with 29 September 1822. Given the scribe has rendered the tarikh date as 9 October, I strongly suspect the year should then be C.E. 1821/V.S. 1878. This reading of the date is further supported by the fact that Tod left Mewar for Gujarat (never to return) in June 1822. We know from his Travels in Western India that he was residing in Baroda throughout October 1822.

The Society held a book launch on the 11th July to celebrate the publication of Farrukh Husain’s book entitled ‘Afghanistan in the Age of Empires’. Farrukh tells the story of the first Afghan War from the Afghan perspective and includes many primary sources which have not been published before. In particular, he included accounts of the roles that Afghan women played in combat. The dust jacket depicts the favourite wife of the Governor of Bamiyan – Shakar Lab or ‘Sugar Lips’ by Lieutenant James Rattray (1818-1854), a soldier and artist. His brother, Captain Rattray, had been introduced to Shakar lab whilst a member of a political  mission. 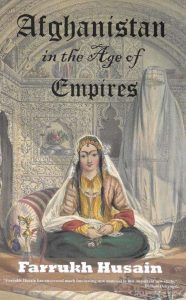