We are pleased to announce that the catalogue for our small collection of Papers belonging to David and Emily Lorimer is now available on Archives Hub. The Papers we hold came from two different sources and were given to the Society at different moments in its history and so the Papers have been divided into two Series – the Lorimer-Gilgit Papers and the Lorimer-Carter Papers. These are titles that had previously been assigned to the Papers and since they are descriptive of the material contained under them, it was decided to keep these headings when cataloguing.

Emily Overend Lorimer (1881-1949) was a British linguist, political analyst and author, She was a tutor in Germanic Philology at Somerville College Oxford, 1907-10, and editor of ‘Basrah Times’ 1916-17. She was with her husband, David Lockhart Robertson Lorimer, British resident in Cairo during the First World War and its Arab Revolt. She was an early translator and analyst of Nazi works, including Adolf Hitler’s Mein Kampf in the 1920s and 1930s. She worked with her husband on Asian studies.

The Papers within the Lorimer-Gilgit series relate to the Lorimers’ trip to Gilgit in 1934-1935 . They were given by  Sidney Duly to Richard Pankhurst, Royal Asiatic Society Librarian, in February 1981. Duly, author of  “The Natural Wealth of Britain, Its Origin and Exploitation”, was a friend of the Lorimers and the papers include correspondence from them to Duly.

There are also articles written by the Lorimers including “The Burusho of Hunza – a Mountain People of Northern Kashmir”. This is an illustrated article with accompanying photo-articles, “The Crafts and Husbandry of the Burusho: A Mountain People in the “Apex” of India”, and “Domestic and Outdoor Life in Hunza: A Peasant Community whose Language is Unique” by Emily Overend Lorimer which were printed in The Illustrated London News, 19 October, 1935. 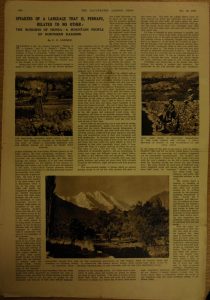 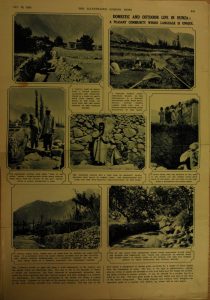 There are also a couple of manuscripts including “Report on Expedition to Gilgit and Hunza, India, by Lt. Col. and Mrs. D.L. R. Lorimer, 1934-1935”. This is a typed manuscript with handwritten annotations concerning their itinerary and the discoveries they made on their trip to Gilgit. It is dated on the final page as 7 January 1936. 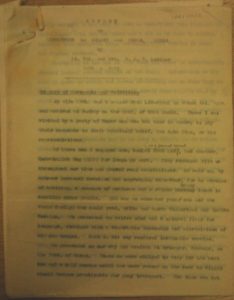 The Papers in the Lorimer-Carter Series came into the Society in 1967 when Roland Carter sent them to Miss Nielsen.

As the letter explains he enclosed some notes on language hunting which Col. Lorimer had sent him as a young political officer in Gilgit, and some further notes that Carter had made of a tour in Gupis & Ishkoman. And the series containsf correspondence from David Lorimer to Carter and also information from the investigation that Carter undertook to aid Lorimer’s research.

The Lorimers made an important contribution in the understanding of the people and language of the Gilgit region. Most of their archival material was bequeathed to SOAS but maybe our small Collection may also add to the picture of this interesting couple.