A message this week from RAS Director, Dr Alison Ohta:

We are now in our 4th week of lock-down as Easter quickly approaches. I can hardly believe that it was less than a month ago that we held our last lecture on the 12th March. It has been a strange time getting to grips with working from home and trying not to let the ever-increasing depressing news become the sole focus of the day. Easter is a time for renewal and rebirth and the skies seem bluer, the birds chirpier and the blossoms brighter than usual.

It is now cherry blossom time in Japan when the Japanese usually take to the parks to meet under the cherry trees to drink sake, sing songs and revel in the rituals of hanami, but this year the traditional viewing spots have been closed and people are being urged not to celebrate.

The cherry blossom or sakura is symbolic of the cycle of life, death and rebirth. The custom is said to have started during the Nara Period (710–794) and the first known written reference to the cherry blossom is found in the Kojiki (Records of Ancient Matters) commissioned by Empress Gemmai (707-715) in 712 which chronicles the origins of Japan and the Japanese Imperial line. By the Heian period (794–1185), the rituals associated with hanami were firmly established. Emperor Saga (786-842) held flower-viewing parties with sake, feasting underneath the blossoming boughs of the sakura trees in the Imperial palace in Kyoto.   Poems were written praising the delicate flowers, which were seen as a metaphor for life itself, luminous and beautiful yet fleeting and ephemeral.

These drops of moisture falling

In the gentle rains of spring?

In the documentary film ‘The Tsunami and the Cherry Blossom’ which records the aftermath of the dreadful tsunami in 2011, a Japanese man reflects on the ability of the cherry tree to survive the devastation, with the appearance of new green shoots only a month after the disaster. He says ‘The plants are hanging in there, so us humans had better do it too’. So, perhaps as we look around us at the wonders of spring including tonight’s pink full moon, bringing us nature’s message of hope for the future, we should focus on hanging in there overcoming the havoc and suffering wrought by Covid 19.

These thoughts bring to mind the Japanese concertina album (Head cat. 077.001), in the RAS collection, of 200 Japanese ukiyo-e from the 1850s in which 3 of the prints depict scenes of cherry blossom viewing in Japan.

The album was donated to the Society by Herbert Charles Fanshawe (1852-1923) in 1923. He joined the Indian Civil Service in 1873 and retired in 1901 having been a Member of the Legislative Council of the Governor-General in India. He was author of Delhi Past and Present, published in 1902, and was a Fellow of the Royal Astronomical and the Royal Geographical Societies. It is not known how he acquired this album, but he seems to have had a predilection for collecting albums as he also donated another to the RAS Collections of small, charming drawings depicting monuments in India and a selection of trades and occupations.

Two of the prints illustrated below are by Utagawa Hiroshige (1796-1858), one of the last great masters of the tradition, who was known in particular for his landscapes. Hiroshige produced thousands of prints to meet the demand for his works. The scenes below form part of One Hundred Famous Views of Edo (issued serially between 1856 and 1859) which was immensely popular. The set was published posthumously and some prints had not been completed — he had created over 100 of his own, but others were added by Hiroshige II (see below) after his death.

In 1856, Hiroshige became a Buddhist monk; that year he began his One Hundred Famous Views of Edo. He died two years later during the great Edo cholera epidemic of 1858 and was buried in a Zen Buddhist temple in Asakusa.

The other artist Utagawa Shigenobu (1826-1869) was a pupil of Hiroshige and married to Hiroshige’s daughter, Otatsu. He later adopted the name “Hiroshige” after his master’s death in 1858 and is known as Hiroshige II. Hiroshige II worked in a style based on that of Hiroshige, but never achieved the level of success and recognition accorded to his master. He is known to have contributed at least three prints in 1858 to Hiroshige I’s last great series of landscape prints, the Hundred Views of Edo.

Although his prints were shown at the Paris Exhibition in 1867, it brought him little success in Japan, and he was forced to make a living painting tea-sets and lanterns for export. He died in Yokohama, in great poverty, in 1869.

This print depicts ladies walking in cherry blossom time along the banks of the Tama River (actually the Tama River Aqueduct), which carried much of the drinking water for the city of Edo along a thirty-mile course. The cherry trees were planted along much of the embankment in the 1730s. The placement was not only aesthetic but also practical as the trees’ roots strengthened the banks, and their petals and leaves were thought to possess antitoxic powers that kept the water pure.

The scene shows cherry blossom time in Asukayama,  which opened in 1737 as a park. Over a 1000 cherry trees were planted in the early eighteenth century by the shogun Tokugawa Yoshimune (1684-1751) so that the people of Edo could come here to drink and eat under the trees. Hiroshige captures the crowds visiting the park, many carrying parasols decorated with cherry blossoms and in the background small groups are seated on mats eating and drinking.

It remains an important park for viewing cherry blossom today and is provided with a small monorail for those who are unable to climb the hill.

The scene shows the Shinobazu Pond with the Kiyomizu Hall and its wide viewing platform providing the perfect vantage point to admire the profusion of the splendid cherry blossoms. Hiroshige also published a similar view in the same year as part of One Hundred Famous Views of Edo. The Kiyomizu Hall was founded in 1631 as part of the Toeizan Temple closely associated with the Tokugawa shoguns, later named Kan’eiji in 1625. It was one of the few buildings of the temple complex to have survived the Battle of Ueno in 1868 when the forces of the new Meiji government fought against the supporters of the Shogun. The temple grounds were converted into a public park in 1873 and Ueno remains one of Tokyo’s most popular and lively cherry blossom spots with more than 1000 cherry trees lining its central pathway. 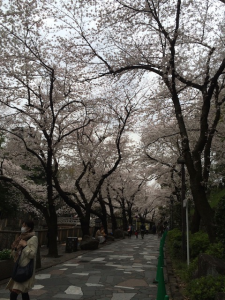 I want to wish you all a very happy Easter from all of us at the RAS and hope very sincerely that our anxiety and fears for the future can soon diminish. So, stay virus-free and I look forward to seeing you in happier times.