Happy New Year to all our readers. We hope that you had a relaxed and enjoyable time over the festive period and that 2016 will be a successful year for you. As you can see by the title, I intend to cover a few different areas in this blog. Firstly I need to announce that, due to unforeseen circumstances, the lecture due to be given by Dr Nur Sobers Khan on Thursday 14th January is cancelled. We are sorry that we will not be able to bring you his talk in the Urdu Manuscript Collections at the British Museum.

However we do have other events in January that I would encourage you to attend. On Tuesday 19th January, Frederica Gigante from the Warburg Institute and SOAS will give the first Fresh Perspectives Lecture of 2016. She will be talking on “Collecting Islamic Art in 17th Century Italy: Ferdinando Cospi, the Medici Court and the Ottoman world”. The lecture takes place at 6.30pm.

The following Tuesday – January 26th at 6.30pm, Amara Thornton (UCL Institute of Archaeology) and Michael McCluskey (UCL English) will introduce footage from our archives of 1930s Iraq captured by the archaeologist Reginald Campbell Thompson in “Excavating the City: Reginald Campbell Thompson’s Moving Images of Mosul” . Campbell Thompson’s archaeological life will be explored alongside his work as a writer and as an amateur film-maker documenting cities in transformation – both ancient and modern.  Amara Thornton and Michael McCluskey are part of a UCL project called Filming Antiquity, which has been funded to digitise and present the 1930s excavation films of archaeologist Gerald Lankester Harding.

The next lecture in the RAS Series will be on 11th February when Dr Sir Jim Mallinson (SOAS) will present a talk on “A History of Yoga and Yoga Scholarship”. Within the RAS Collections we have manuscripts, books and photographs relating to yoga and so this week we will be changing the display in the cabinet in the Reading Room to showcase some of our yoga items. Please take time to come and see them if you are in the building.

I often blog about our collections. We have a variety of material and it can be confusing to know what is actually meant by Archives. I was browsing my magazine from the Archives and Records Association and came across an article written by Peter Monteith at King’s College, Cambridge. In it he describes a website they have devised called “Introduction to Archives” which not only gives information about archives but also provides a case study about the archival material of Rupert Brooke. The site has been devised to aid A-level and GCSE students gain an understanding of the nature of archives and how to approach them. I would certainly recommend it to anyone involved in education who wishes to encourage students to use primary sources. But also it will be of interest to anyone who has a love of research, learning and discovery. You can find the website here. Have a browse and you can find out about all sorts of archival terms and concepts.

Using archival material to create educational resources is one of the aims for the RAS Collections. We would like to be able to encourage people to use primary sources and know the delight in undertaking research with original documents. We are particularly keen to use the new Thomas Manning Archive for such a purpose. It contains such a wealth of material, and though we primarily acquired it because Thomas Manning was an unique Chinese scholar, the collection contains material across a wide range of interests.

This week I have been learning about life for an Englishman in Napoleon’s France. Manning traveled to France from Dover on 5th January 1802. It was quite common for Englishmen and women to stay in Paris and be part of the cultural life there. Manning particularly wanted to spend time in Paris in order to learn Chinese. However with the outbreak of hostilities between England and France many English people became prisoners of the state. Napoleon did not want to let them return to England in case they took up arms against him. Some were actually imprisoned but Manning was allowed to stay with his friends, the Serrant family, at their chateau near Angers in the Loire Valley. In the collection we have a number of official documents dating from that period which gives some indication of the bureaucracy at that time. Here are a sample: 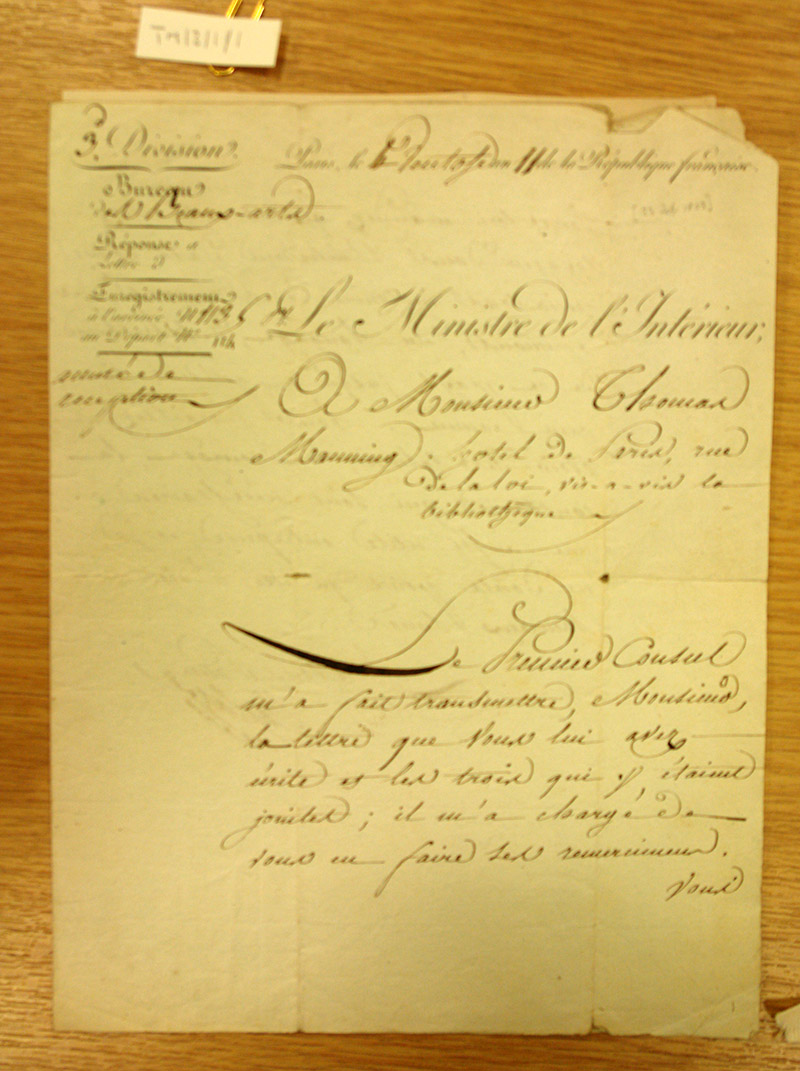 This is a letter from Le Ministre de L’Interieur to Thomas Manning, Hotel de Paris, replying on behalf of the Premier Consul concerning Manning’s letters to him regarding his intention of going to China, dated 6 ventose an 11 (25th February 1803)
———– 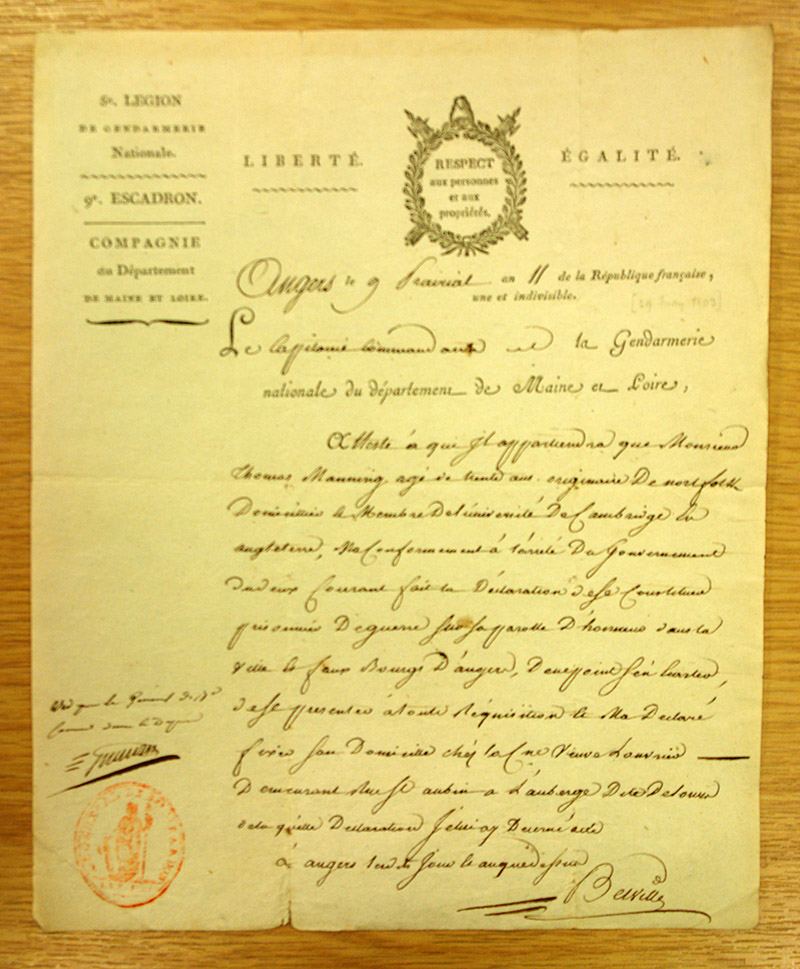 This is an official notification from Belville, Le Capitaine commandant au la Gendarmerie nationale du départment de Maine et Loire to give Thomas Manning permission to have parolle  d’honneur in Angers. Dated 9 prairial an 11 (29th May 1803).
—————– 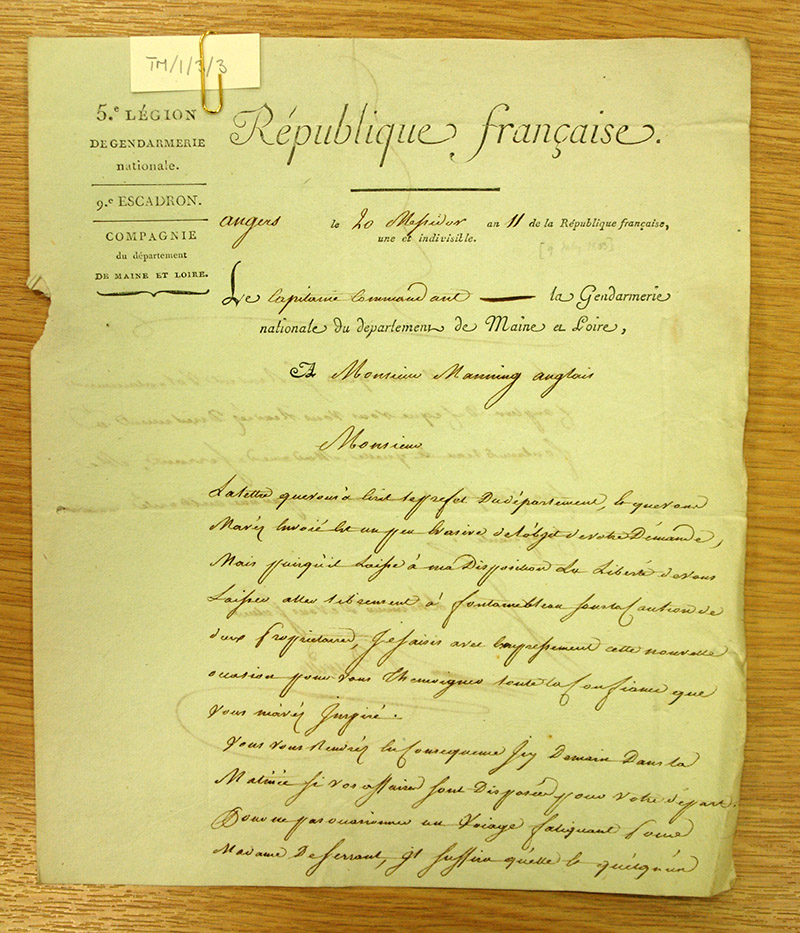 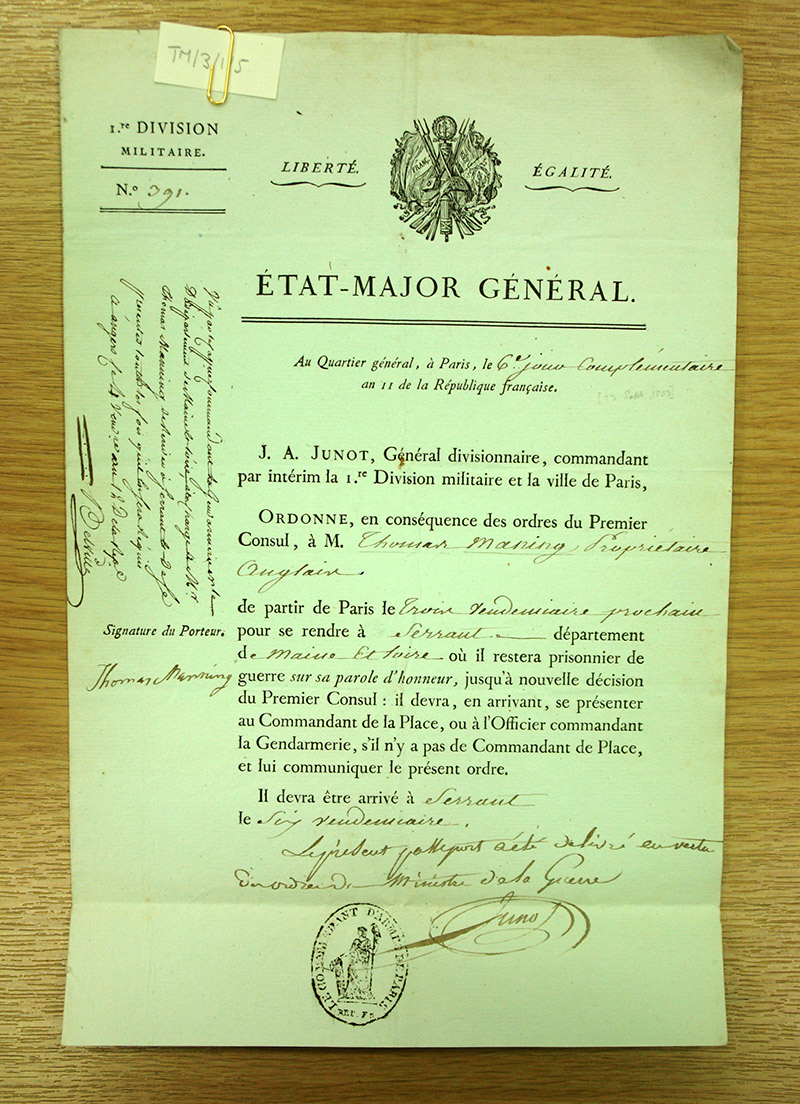 A notification from État-Major Général, au Quartier général, à Paris stating on the orders of the Premier Consul that Thomas Manning should leave Paris and go to Serrant. This order replaces any previous orders.Signed by A Junot, a French General. It is dated 6th [ ] an 11, (dated in another hand as 9 September 1803). Printed document with handwritten details. It also has in the margins a note from Belville.
——————— 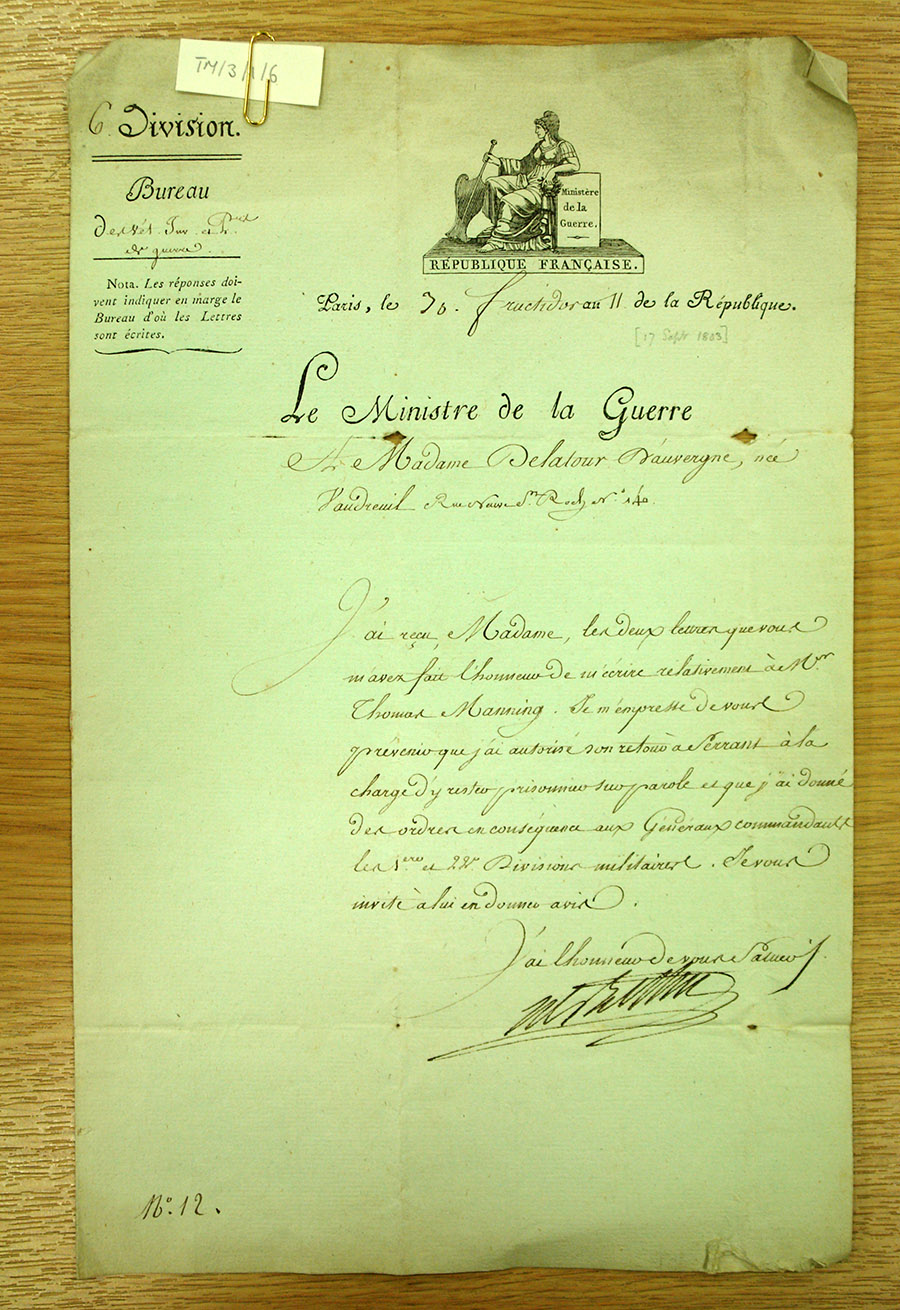 And, lastly in this selection, a letter from Le Ministre de la Guerre to Madame Delatour D’auvergne, née Vaudreuil concerning the status of Thomas Manning. Dated 30 fructidor an 11 (17 September 1803).
This selection show something of the system of administration that was current in the Napoleonic era. Manning had to remain in France for a much longer period that he had planned, delaying his intentions of travelling to China, and during which time, we discover from his letters to his father, his opinion of Napoleon changed. He initially thought him almost godlike, he was less enamored later on…
Amara Thornton Archives Frederica Gigante Jim Mallinson lectures Michael McCluskey Muslim Art Napoleon Reginald Campbell Thompson Thomas Manning yoga
Share: