This week’s blog post is by RAS Librarian Edward Weech.

Many long-time readers of the Society’s blog will remember that, in 2015, the RAS acquired the archive of Thomas Manning (1772-1840). At the time, Manning was known as one of the first English people to study Chinese language and culture; the first Englishman to visit Lhasa, capital of Tibet; and as a participant in the early British Romantic movement, notably through his friendship with the writer Charles Lamb. The new archive contained vital new sources for understanding his life and work, and promised to help us better understand his largely unexplained obsession with China, his extraordinary travels, and his intriguingly modern outlook – all of which had remained shrouded in tantalizing mystery. 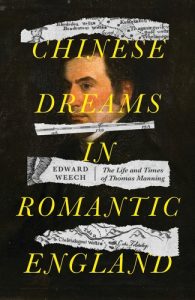 This week saw the publication of my book Chinese Dreams in Romantic England: The Life and Times of Thomas Manning, which uses the Society’s archive and other sources to provide the first comprehensive overview of Manning’s career. It also reveals why he dedicated the best years of his life to learning about China.

Born in Norfolk in 1772, Manning studied at Cambridge where he showed great promise as a mathematician. Like many in his generation, Manning was inspired by the French Revolution. But instead of becoming a political or literary radical like the early Romantics, Manning believed that studying the advanced civilizations of the Far East could provide new ideas for social reform. Manning thereby determined to conduct a first-hand study of Chinese society – a culture which, at the time, was completely closed to Europeans. His efforts to explore China culminated in an overland journey through the Himalayas to Lhasa, where he met the Dalai Lama; they also involved shipwreck, detention as a prisoner of war, and a meeting with Napoleon.

One of the reasons Manning is so interesting is that his curiosity about China had nothing to do with empire, trade, or missionary religion. His desire to learn about another culture was motivated instead by the goal of applying new knowledge to improve life in Britain. His unusual project was certainly not representative of the times, but it points to the complexity of British attitudes towards Asia at the beginning of the nineteenth century. You can find a short video introducing the book online at https://www.youtube.com/watch?v=X7v9AnONTuU

The Royal Asiatic Society was founded to promote scholarly exchange and public interest in the histories and cultures of Asia. Today, it is also concerned with the history of how and why British people in the past learned about Asia, and about the changing and growing place of Asia within British cultural life over the centuries. I hope that the themes explored in this book will resonate with the Society’s members and supporters; and that learning about the remarkable life and adventures of Thomas Manning will help build renewed confidence in the Society’s mission as we enter its bicentenary in 2023.

The book is available directly from the publisher, Manchester University Press, at https://manchesteruniversitypress.co.uk/9781526164551/chinese-dreams-in-romantic-england/ You can also enjoy exploring Manning’s archive online via the Society’s Digital Library at https://royalasiaticcollections.org/thomas-manning-archive/