Yesterday evening, Thursday 19 January, the Society was delighted to host the prize giving for the 2022 Bayly Prize. The prize was initiated in 2018 to mark the outstanding contribution of Professor Sir Christopher Bayly to the study of world history and is awarded each year for a distinguished dissertation on an Asian topic that would fall within the scope of the Journal of the Royal Asiatic Society or of Modern Asian Studies, and which has been approved for the PhD degree by a British university either in the previous calendar year or since the Prize was last awarded. This year the prize was awarded to Dr. Sonia Wigh for her thesis on The Body of Words: A social history of sex and the body in early modern South Asia. Dr Wigh was able to be present at the ceremony and shared with the audience a few of the main points about her research.

Not only was Dr Wigh in attendance but so too were three of the four shortlisted candidates; two in person and one via zoom. Therefore we also able to learn a little about Dr Katie Campbell’s research on Cities and the Mongol Conquest: Urban Change 1200-1400, Dr Taushif Kara’s research on the Abode of Peace: Islam, empire and the Khoja diaspora, and Dr Melyn McKay’s research on For women there are two Nirvanas: Risk and Freedom in Myanmar’s contemporary Buddhist revival movement.

Each talk produced an interesting set of questions from the audience who were keen to learn more about each candidate’s research. The ceremony was followed by a reception during which the discussions continued. Unfortunately the fifth shortlisted candidate, Dr Matthew Woolgar was unable to be with us, but the Society also extends its congratulations to him for his dissertation on Communism in Context: The Indonesian Communist Party in West Java.

The Society would like to thank all those who support the Bayly Prize either through their financial giving or by being part of the judging panel. The Society would also like to encourage current PhD students who are about to complete, or have just recently completed, their studies to look out for the forthcoming launch of the 2023 Bayly Prize.

Katie’s talk on archaeology reminded me of some letters I recently catalogued. Currently, I am working through the Governance archives for the Society. Several Governance catalogues are already online with their links below:

A volunteer is working on the catalogue for the Charter and Byelaws and, for the last two weeks, I’ve been working on the administrative documents concerned with Governance. These two further catalogues will complete the archival Governance material though, as the Society is still active, new records are being made all the time. As these are no longer needed for current use they will be assessed as to their archival value So I fully expect some of these catalogues will need to be updated from time to time.

One section of the administrative documents I am working with are a series of letters concerning the Society of Biblical Archaeology. The Society was founded in 1879 by Samuel Birch, Keeper of Oriental Antiquities, British Museum, and others. Archibald Henry Sayce became its President in 1898. His interests were in Assyriology and he became a pioneer in its studies, publishing many articles and undertaking translations of cuneiform inscriptions. Sayce held a chair as Professor of Assyriology at the University of Oxford from 1891 to 1919 and was a Royal Asiatic Society Triennial Gold Medal Winner in 1925. The Society for Biblical Archaeology was active throughout the end of the nineteenth and beginning of the 20th century but the First World War saw a loss of many of its overseas members and trouble with its accommodation. 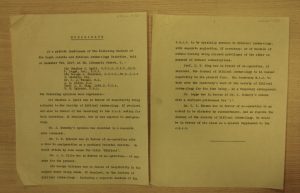 From 1917 discussions commenced concerning the amalgamation of the Society of Biblical Archaeology into the Royal Asiatic Society. Early Memorandum suggest this was not considered the best option; some form of cooperation was preferred with the Royal Asiatic Society extending hospitality to the Society of Biblical Archaeology and potentially sharing officers. However by April 1918 the Minutes of a joint meeting show that the resolution was passed stating: ‘That in the opinion of this Meeting, amalgamation of the two Societies is the best form of co-operation’. 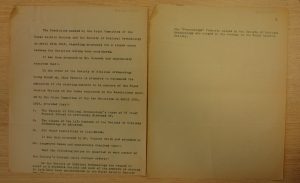 Our archives contain a series of correspondence from Francis Legge of the Society of Biblical Archaeology to James Kennedy, Treasurer of the Royal Asiatic Society, from January to July 1918 during which various matters were discussed. However at the same time the Society for Biblical Archaeology went into voluntary liquidation and there are also a series of letters from the liquidator to the RAS Secretary. 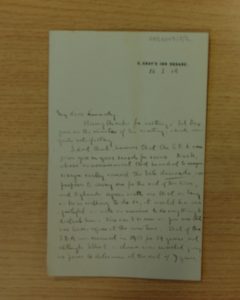 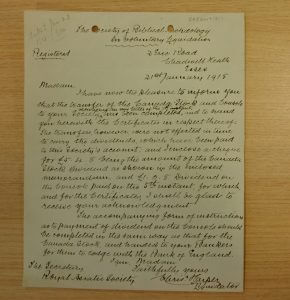 On 18 September 1918, a letter was sent to all Fellows of the RAS to inform them of the forthcoming amalgamation and the conditions under which it would be undertaken. To ratify this a Special General Meeting was called for the 8 October to consider amendments of the Society’s Rule 67, necessary for the amalgamation to occur. 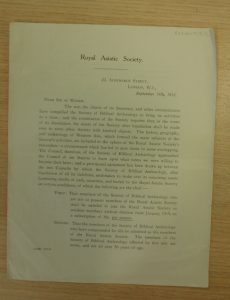 At that meeting it was resolved that from 1 January 1919 all members of the Society of Biblical Archaeology would be admitted to the Royal Asiatic Society upon payment of the appropriate membership fees. 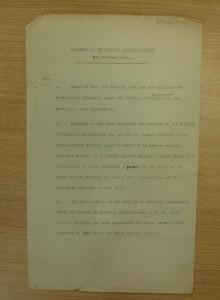 And so the Society of Biblical Archaeology joined the Royal Asiatic Society. However the joining together of the Societies did not also mean that their collections were joined. Most of the Biblical Archaeology Society’s possessions were disposed of by the liquidator. But it is good to have this small set of material to commemorate the amalgamation.

The next event on the RAS Calendar is the presentation of the Festschrift in honour of Barbara Brend on Thursday 2 February at 6.30pm. Barbara is a specialist in the field of Persian and Mughal painting, having published several books including the recent, Treasures of Herat. The Festschrift honours a lifetime of work in her specialist field. At the Royal Asiatic Society we also have further reason to be grateful to Barbara. She has served the Society on both Council and sub-committees for more than twenty years. Barbara is currently the Head of the Library Committee. We would encourage you to come to participate in this celebratory event.