On Thursday 6 June, Edward Weech (the Society’s Librarian) delivered a lecture entitled “Systems of Religion and Morality in the Collections of the Royal Asiatic Society”. Edward’s lecture was a response to the question of how the secular study of religions and moral systems came about. He traced this to developments in the religious and intellectual culture of the seventeenth and eighteenth centuries – developments which also helped prepare the way for the founding of this Society in 1823, as well as its progenitor, the Asiatic Society of Bengal, which was founded in 1784 by Sir William Jones. Selecting a few key objects from the Society’s collections, Edward used these to explore how the Society’s attitude to the study of religion found expression in its collecting policy. To conclude, Edward suggested the importance of this intellectual inheritance in the context of a modern pluralist society. You can listen to the lecture online here.

Edward talked at some length on William Jones, the founder of the Asiatic Society of Bengal. His influence can also be seen in the instigation of the Royal Asiatic Society. The Society’s collections include some material directly connected to Jones. Here is an engraving of his portrait by the artist, A.W. Devis.

Within the Collections are botanical drawings made by both Sir William and Lady Jones, and by Indian artists including Zayn al-Din. It is not known how these came into the possession of the Royal Asiatic Society but they include some detailed pictures of Indian botany. Here are some examples: 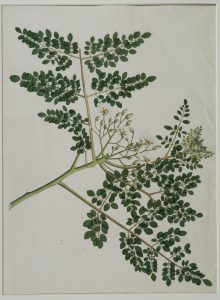 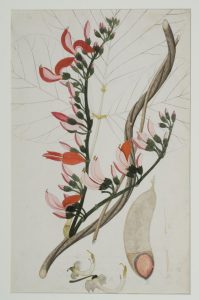 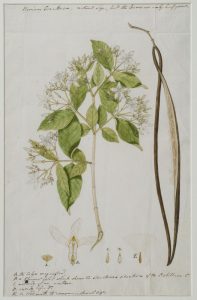 We also have some of his books and a small amount of archival material pertaining to both Sir William and Lady Jones. The archives includes a book of the correspondence of William Jones. This correspondence, mainly between himself and Samuel Davis, consists of 37 letters collected into a brown leather bound book, approximately in date order. The introduction to the book states the letters are “chiefly concerning the Literature & Science of Asia; including some of the early history of the Asiatic Society of Calcutta.” The correspondence reveals a lively communication from Jones to Davis and often mention Davis’ interest in Indian astronomy. Also within the book is a handwritten version of an introduction to these letters as printed in the “Transactions of the Royal Asiatic Society Vol. III – Part I”, 1831, in which all the letters were printed. The letters also contain one letter from Sir Joseph Banks to Samuel Davis thanking him for paper on the History of Astronomy which Banks had communicated to the Royal Society and remarks from a Mr Cavendish. 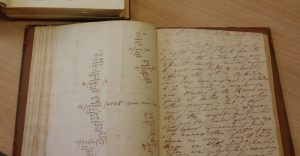 Details of Sir William Jones’ books and artworks can be found on our Library Catalogue and those for his archives on our Archive catalogue.

Our next lecture is on Tuesday 18 June, 6.30 pm, when Susan Stronge, Senior Curator in the Asian Department at the Victoria and Albert Museum, will lecture on “The Lapidary Arts of the Mughal empire in the 17th and 18th centuries”. We hope that many of you will be able to join us for this event.