The Society would like to extend our warmest wishes to everyone in the New Year and mostly importantly, health and happiness in the year ahead.

We start the year with the news that in light of current Government restrictions, our reading room service is suspended until further notice. However, work is continuing remotely and staff are still responding to enquiries over email. On a brighter note, we have three virtual events planned during January to look forward to with details about these below.

The History of British Diplomacy in Pakistan

The first event of 2021 is a virtual book launch on the 19th January of Ian Talbot’s, ‘The history of British diplomacy in Pakistan.’ With contributions by Dr Rakesh Ankit and Professor Roger D.Long, the book presents an account of the British diplomatic mission in Pakistan from its foundation at the end of the Raj in 1947 to the ‘War on Terror.’ The author argues that the period witnessed immense changes in Britain’s standing in the world and in the international history of South Asia to show that Britain maintained a diplomatic influence out of proportion to its economic and military strength. This book will be of particular interest to academics working in the fields of South Asian History & Politics, International Relations, British and American Diplomacy & Security Studies, Cold War Politics and History and Area studies. 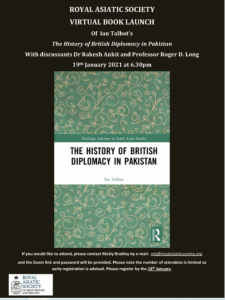 On the 21st January, Jonathan Lawrence will be giving a lecture to the Society on: ‘Acquiring Books in Eighteenth-Century Bengal: William Jones’ Library.’ This lecture is based on a recent article Lawrence wrote for the Journal of the Royal Asiatic Society about Sir William Jones and the Arabic and Persian manuscript collection that he acquired both before arriving in India in 1784, and during his time living in Kolkata. Sir William was also the founder of the Asiatic Society of Bengal in 1784. The Society holds material from Sir William within the archives, this includes a sales catalogue of the William Jones library where parts of his collection were sold at auction following his death. 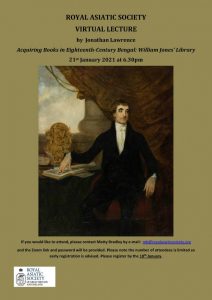 This promises to be to an insightful event and early booking is recommended.

As highlighted in the previous blog post, we have the book launch on the 29th January of the publication, ‘Islamic Movements in India’ by Dr. Arndt Emmerich. This book analyses the emerging trend of Muslim-minority politics in India and suggests that a fundamental shift has occurred over the last 20 years from an identity-dominated, inward looking approach by Muslim community leaders, Islamic authorities and social activists towards an inclusive debate centred on socio-economic marginalisation and minority empowerment. 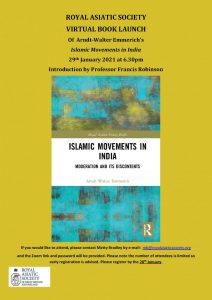 If you are interested in attending any of these events, please email Matty Bradley at mb@royalasiaticsociety.org to register. We look forward to seeing many of you there!

January issue of the Journal now published on Cambridge Core

Fellows of the Society are reminded that they can access an electronic version of the Journal, ahead of its print publication, by visiting Cambridge Core and clicking the ‘Latest Issue’ tab at the top of the ‘home page’.    https://www.cambridge.org/core/journals/journal-of-the-royal-asiatic-society

Our January 2021 issue has been available there since before Christmas. We do not know exactly when the print version will be dropping through your letter box but at present there are no plans to suspend print publication in response to this third lockdown as was done in the summer.