This week, two new small catalogues have gone live on Archives Hub. These are both connected to translations but in very different ways. The first catalogue is for Chinese Documents on Trade Regulations with the English. These documents are all written in Chinese and we are very grateful to Dr Fu Yang who spent several months volunteering with us whilst finishing her PhD thesis. She both translated these documents into modern Chinese and provided English abstracts of them, so that for the first time we are able to know what they contain and therefore have the means to catalogue them. This collections marks the first Special Collections Catalogue to go on to Archives Hub.

This document outlines matters concerning use of language, official actions to be undertaken, use of sampans, use of local labour, escort ships and warships, and that all the details have been discussed with George Thomas Staunton and therefore shouldn’t need further discussion. The collection contains two further documents concerning the sale of opium and British warships in Chinese territorial waters. It is good to be able to begin to catalogue our Special Collections with such an interesting set of documents.

The second catalogue to be finished this week and to be on Archives Hub is the catalogue for the Papers of Edward Rehatsek. Rehatsek spent the majority of his adult life in Mumbai, India, living a simple life, working, among other things, as Professor of Mathematics and of Latin at Wilson College. He spent many hours in translation of  Arabic and Persian works. The Papers that we have for Rehatsek are translations that he sent to Forster Fitzgerald Arbuthnot who deposited them with the Royal Asiatic Society some time around 1895.  The manuscripts that we have must represent many hundreds of hours work undertaken by Rehatsek – some of which have never been published.

This manuscript is itself undated but Rehatsek has written his translation on the reverse of pages from Bachelor of Arts Examination Paper in Persian for 1878. Rehatsek was an Examiner at Bombay University in Latin, Arabic, Persian, and French until 1881.

It is always satisfying to know that some more parts of the Collections are now catalogued online and therefore can be more easily found by researchers from around the world.

On Thursday 15th November, we welcomed Moin Mir to launch his new book,“THE PRINCE WHO BEAT THE EMPIRE. How an Indian ruler took on the might of the East India Company” published by Amberley Publishing in June 2018. Introduced by Dr Rosie Llewellyn-Jones who set the scene for Moin Mir then to tease us with the beginning of the story of his ancestor, Meer Jafar Ali Khan, who took his fight to, and saw the political defeat of the East India Company, in the House of Commons. It is a fascinating story which led to many people buying the book to discover how the Prince achieved this and what happened to him in the aftermath of this defeat.

Next week on Tuesday 20th November, 6.30 pm, Dr. Jacob Ghazarian from Oxford University will lecture on “The Ancient Silk Road: Its enduring impact on China and renewed objectives”. This lecture will deal with the arrival of Buddhism, Christianity and Islam in China, and more specifically the recent revival of interest in Buddhist traditions, the vanishing of Christianity and the defiant survival of Islam.  The talk will offer how the new Chinese administration’s flag-initiative called ‘Belt and Road’ may widen China’s political sphere of influence both from economic and religious perspectives. We hope to welcome many of you to this lecture. 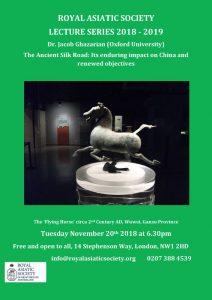