The Society is pleased to announce that the latest edition of the journal is now available for Fellows to view on Cambridge Core.

‘The Roar of Silence’ is a Festschrift in honour of François de Blois who has served on the Society’s Council for many years, including as Vice President. Notably, he was appointed Research Fellow to the Society in 1989 with sole responsibility for continuing C.A. Storey’s bio-bibliographical survey of Persian literature. François has also held research appointments on a number of major projects in Iranian studies, including the Manichaean Dictionary and Bactrian Chronology projects at SOAS.

The contributors to this festschrift represent an international group of scholars, most of whom have been direct colleagues or former students of François, with articles covering a range of disciplines and topics that he has been actively involved in.

Fellows are reminded that to view this content they will need to sign in with their personal login details.

One of the articles included in this festschrift is by Professor Almut Hintze, who is currently the Zartoshty Brothers Professor of Zoroastrianism at SOAS. In her article, Professor Hintze discusses some manuscripts that were copied and described by Edward William West in his notebooks, now held within the Society’s collections. Professor Hintze has kindly provided an overview of this article and her research below.

The Royal Asiatic Society houses the papers of Edward William West, by profession an engineer, who spent the years 1844–1851, 1852–1866 and 1874–1876 in India, first superintending the family-owned cotton presses in Bombay and, from 1852, as Chief Engineer on the Great Indian Peninsular Railway Project. These papers testify to the passion of E.W. West’s life: the Pahlavi texts and the Parsis. While in India, he established life-long and abiding friendships with leading Zoroastrian priests and scholars, in particular with Dastur Hošang Jāmāspji Āsā in Poona, with Dastur Peshotan Behram Sanjana and his son Dārāb Dastur Peshotan Sanjana in Bombay, and, especially, with Dastur Jāmāspji JāmāspĀsāna in Bombay. These priests opened their remarkable collections of manuscripts to E.W. West, who transcribed and collated many of them.

In 1950 Jean de Menasce published a handlist of West’s papers at the RAS, grouping them into 70 items. Little, if any, further work was done on West’s papers until the summer of 2018, when Aadityakrishna Satish, an undergraduate from the College of the Atlantic in Bar Harbor, Maine, USA, worked as an intern with the Society and provided a more detailed description of the contents of the notebooks: https://royalasiaticsociety.org/a-short-reflection-archive-e-w-west-knowledge/  In 2019, the RAS’s Archivist Nancy Charley completed the catalogue and, as a result, a full inventory of West’s papers is now available online on the RAS’s Archives Hub. At the time when Aadityakrishna Satish was working at the RAS in the summer of 2018, members of the Multimedia Yasna (MUYA) team at SOAS, in particular Leon Goldman, Céline Redard and Mehrbod Khanizadeh, photographed notebooks 1–36, and in December 2019 Carlo Marchetti and Massimiliano Vassalli (both of the University La Sapienza, Rome) digitised notebooks 37–55 in collaboration with SOAS students, including Ruzbeh Hodiwala and members of the MUYA team. The images have been made available to the Royal Asiatic Society for eventual online publication.

My contribution to the volume in honour of François de Blois discusses some of the manuscripts copied and described by West in his notebooks, especially the Pahlavi codex MK of Dastur Jāmāspji JāmāspĀsāna, who treasured it greatly. West made his copy in 1875, and it is preserved on pp. 1–99 of his Notebook 13 at the RAS. MK contains 38 texts which belong to different literary genres, including Wisdom (Handarz) and Court literature. Dating from 1321 CE, it is the oldest extant Pahlavi manuscript. It is also a unique codex as seven of its texts are only known from this manuscript and its copies. The rigorous precision with which West executed the copying of MK and of other manuscripts is characteristic of his work preserved in the Notebooks. His diligence is particularly well suited to documenting the lacunose state of preservation of MK. In fact, the copies of MK and of any other witnesses of the texts MK contains, are essential to fill the many gaps in MK. Shortly before his death West is reported to have said with characteristic understatement that “although his studies and researches had always been undertaken for the sake of amusement and curiosity, they could hardly be considered as mere waste of time.” In fact, they have long come to be regarded as a milestone, and his notebooks reveal that his contributions to Pahlavi studies are even greater than hitherto thought.

We would like to thank Almut for her valuable contribution to this week’s blog.

This lecture explores the life of Liaquat Ali Khan, the first Prime Minister of Pakistan, in the years before 1947. This lecture will explore Liaquat’s relationship with Mohammad Ali Jinnah who appointed Liaquat as the General-Secretary of the All-India Muslim League (AIML) in 1936. The lecture also touches upon Liaquat’s background and career, his education at Aligarh and Oxford, as well as his devotion to the ideals of Sir Syed Ahmad Khan, Iqbal and Jinnah. 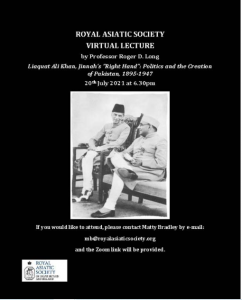 To attend, please email mb@royalasiaticsociety.org and the Zoom link and password will be provided. We look forward to seeing many of you there!