Working with the RAS Collections is always an interesting experience – no two days at work are ever quite the same. Recently I have been working on some big collections – doing an initial survey of the new Angus C. Graham Archive, continuing to work on the Edward W. West Papers, and sorting through the Institution’s Archives surrounding care of the Collections. These will all take considerable time to fully organise and catalogue. So, every now and then, I take a small set of Papers to sort, so I can have a “quick win”.

A fortnight ago, I picked up the Papers of Michael John Rowlandson – a set of four journals with an accompanying donation letter and these became my small project. It was difficult to find much information about Rowlandson on the Internet, but my search lead to the book, Reclaiming Islamic Tradition: Modern Interpretation of the Classical Heritage edited by Elisabeth Kendall and Ahmad Khan (Edinburgh University Press, 2016). Ed Weech kindly borrowed this book for me from SOAS Library for in it is a chapter by Carole Hillenbrand, Professorial Fellow in History at the University of St. Andrews and Professor Emerita at the University of Edinburgh. Hillenbrand’s chapter is entitled, The Impact of a Sixteenth-Century Jihad treatise on Colonial and Modern India – possibly not the first place that you might expect to find information about the son of an English clergyman.

Rowlandson was born in Hungerford, Berkshire, in 1804. His father was the vicar of Warminster. Rowlandson joined the Indian army in 1820 becoming a lieutenant in 1821 and a major in 1824.He served at the College of Fort St. George as a Persian and Arabic translator and teacher and produced an Arabic textbook, “An analysis of Arabic quotations which occur in the Gulistan of Muslih-ud-Deen Sheikh Sadi, as collated with and according to the editions of Gentius and Gladwin, accompanied by a free translation: to which are added Persian illustrations of the same, and remarks on Arabic grammar, both in the English and Persian languages, the latter being extracts from the Muntiʼkhib alsurf of Moulevy Syed Ameer Hyder”, (that’s some title!) for use at the College in 1828. He then went on to translate “Tohfut-ul-mujahideen“, which was published by the Oriental Translation Society in 1833. This is why Hillenbrand included him in her chapter. Rowlandson’s was the first English translation of this text. Hillenbrand presents an analysis of the Preface and Footnotes discussing Rowlandson’s motivation for translation – for those of you interested, I would recommend reading the chapter.

But Rowlandson  despite this translation, did not become known in the “orientalist” scholar-tradition. There is very little known about his personal life. Maybe the items within our Collections may help a future researcher shed more light upon him. We have:

MJR/1 -“Diary Commencing October 20th 1825” by “Mr Rowlandson“, the date on which he departed from Madras (Chennai) heading for Bengal. He sailed from Bengal on 8 December 1825. The diary marks the latitude and longitude each day and journals things seen and thoughts about the experience as he sails for England. It also includes some sketches of land formations that he has seen, and additional notes in the margins. After completing this journal, he then restarts using the notebook in 1887 to write copies of letters and sermon notes. The final page has a musical composition dated 29 March 1826.

MJR/2 – Sacra Privata of M J Rowlandson in which he records his prayers and spiritual thoughts. The book is written from both the front and reverse dating from 1830-1867 and includes both his time in India and back in England. Some pages have been cut out, some additional notes inserted, including a memorial notice of the deaths of two of his daughters in 1858.

MJR/3 – “Translation of Arabic Charms” and other articles. In the front of this book are a series of copies of official documents such as

In the back of the book there are a completely different set of documents such as Translation of Arabic Charms”, “Remarks on Mahomedans of S India”, Abstract of lending axioms of Mahomedan Law”, “Abstact of political Relations of British India with native tribes etc.”, “Abstract of land principles Mahomedan law. 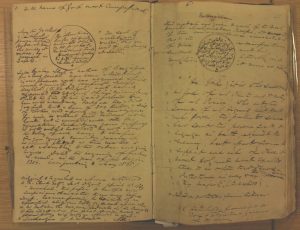 There are also items inserted into the book including Hindustani Examination May-1861. Paper No. 2, Memo of supposed casualties discovered from 8 Decr 1842 to 8 Aug 1846, “Tabular Statement of Reports and Letters dispatched by Several Gov agents and Paymaster [ ] Stipends at Chepauk… “, “Statement of Service” for M J Rowlandson, and a Letter to Lieutenant Campbell recommending Arabic works, dated 8 December 1848.

MJR/4 – The fourth journal in the collection is entitled, Spare copies of certain Letters and Reports to Government of Fort St. George for convenience of reference, 8th December, 1840. It contains a series of handwritten official documents. Inserted into the journal was also a  “Hindoostan Report” or “A Native Gentleman Letter” and a copy of “Persian Court Gazette for sana-yi 1267 (21 February 1851).

These journals were donated to the Society in 1982 by Muriel Turner, Rowlandson’s great-granddaughter. She had previously donated copies of Rowlandson’s two books mentioned above. The full catalogue for these Papers is now available on Archives Hub. Hopefully now that it is catalogued, it will enable researchers to find out more about this India army man turned translator and teacher. 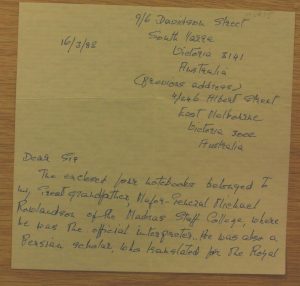 Next Wednesday, 12 September at 7 pm, there will be a screening of the film “Saragarhi: The True Story” based on the true story of the battle of Saragarhi, which saw a British outpost surrounded by 10,000 Afghan tribesmen, and shares the remarkable story of a valiant last stand that would reverberate around the British empire. More details can be found on our website. 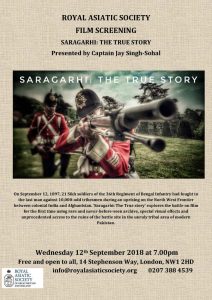