Over the past few weeks the RAS has hosted several lectures and book launches which showcase some of the breadth and depth of current Asian Studies. On Thursday 4th May Dr Claude Mutafian spoke on the “The Magic of Writing: A Survey from Stone Inscriptions, Illuminated Manuscripts to Printing”, in a lecture co-hosted by the Armenian Institute. Dr Mutafian explained how early Armenian inscriptions used neighbouring languages as the Armenian language was purely oral. But with beautiful illustrations, Dr Mutafian told the story of how the Armenian written language was developed and how important it has been to the Armenian people who had an imperative to record their existence when they had a changing, or no, homeland.

This informative lecture was followed on Monday 8th May  by an event for Professor Nobuaki Kondo of the Research Institute for Languages and Cultures at Tokyo University of Foreign Studies who launched his latest book entitled   Islamic Law and Society in Iran. The launch was chaired by Professor Francis Robinson, Vice-President of the Society and Chairman of the Monograph Board. The book examines the relationship between Islamic law and society in 19th century Qajar Iran drawing on rich sources of archival material  such as shari’a court registers, vaqf documents, building surveys and property inventories. The book is published by Routledge in conjunction with the Royal Asiatic Society and a limited number of volumes are available from the Society at the discounted price of 84GBP.

On Thursday 16th May, the RAS held its Anniversary General Meeting, at which  Dr. Gordon Johnson, RAS President gave a favourable report of the Society’s year’s activities and Treasurer, Mt Lionel Knight delivered the financial report. Professor Tony Stockwell was elected as a Vice-President. Following the business matters, Professor Susan Bayly lectured on “How to Forge a Creative Student-Citizen: Achieving the Global in Today’s Vietnam”, in which she expounded on some of her fieldwork in Vietnam concerning the use and effectiveness of public images in contemporary contexts, and their impact and narratives for individual citizen’s lives.

On Monday 15th May, the RAS welcomed Dr George Kam Wah Mak to launch his new book, Protestant Bible Translation and Mandarin as the National Language of China. Dr Mak gave a clear interpretation of how the Protestant Bible was one of influences in the standardisation of Mandarin. We were glad to welcome back Dr Mak, a previous Barwis Holliday Award recipient.

We have two more lectures forthcoming in May. Tonight (Tuesday 16th May) at 6.30 pm, Dr Simon Layton will lecture on “Piracy and Politics in the Indian Ocean World”. We look forward to learning more about this exciting topic: 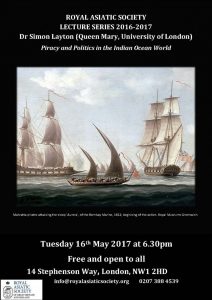 And on Monday 22nd May, again at 6.30 pm, we welcome Professor Jonathan Bloom who will lecture on “Silk Road or Paper Road?” – another topic which should prove to be of great interest. 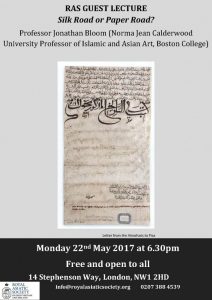 We hope that you will be able to attend one of these lectures. If you are unable to get to any lecture, you will find many of them have been podcast and are available here.