Dr Funda San (Yildiz Technical University) is currently exploring the Society’s collection of Turkish manuscripts, as part of a research project supported by TUBITAK (The Scientific and Technological Research Institution of Turkey). We recently asked Funda for some insights into RAS Turkish 47, which is one of the most frequently requested manuscripts in our Turkish collections. An early copy of the Kulliyat (collected poems) of Ali-Shir Nava’i (1441-1501 CE), this manuscript dates from the C16th and contains five miniature paintings. Funda kindly compiled some notes about the scenes depicted in these paintings to help inform and guide other library users seeking to enjoy this manuscript. We are delighted to make her notes available via our blog, with her permission.

The miniatures depict scenes from the stories of Alexander the Great, Farhad and Shirin, Hayretu’l-Ebrar, and Layla and Majnun. These all pertain to Nava’i’s Khamsa (five poems), written between 1483 and 1485. Nava’i was the first person to write a Khamsa in Turkish. 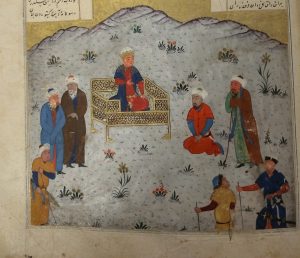 The Sedd-i İskenderi is a mathnawi poem explaining the story of Alexander the Great as a just king and wise man. In this picture, Alexander tells people around him about the dream he had that night. He mentions that in his dream he saw two bright suns which are unique and never seen before. One of them illuminates him, and the other settles on his forehead. At that time, the Chinese khan came to Alexander’s headquarters in the guise of an ambassador. After Alexander finished describing his dream, he received the ambassador and asked him why he had come. The ambassador says that he was sent by the khan and that his hands and feet should be tied if they do not trust him. Although Alexander says that it is unnecessary to tie an ambassador, upon Aristotle’s warning, they tie the ambassador and put a sword in front of Alexander. When the ambassador is alone with Alexander, he explains that he is not actually the ambassador, but the khan himself. After this confession, Alexander was surprised and asked why the khan came of his own free will and surrendered. The khan explains that he has no other choice and that he came to Alexander because he trusts him. He apologizes and begs for forgiveness. Then, Alexander forgives him. 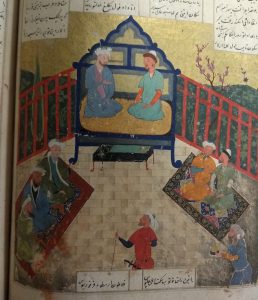 The Chinese khan gives a great feast for Alexander. The hospitable khan gives a place to Alexander to sit on the throne. The khan and Alexander sit side by side on the throne and chat, just like father and son. Plato, Aristotle, and Porphyry, the people of wisdom, also sit next to them. The Chinese khan offers all his treasures to his guests. He gives a wonderful concubine and a magical mirror to Alexander, along with many valuable gifts. The concubine is both beautiful and a very good fighter. The mirror is a talismanic mirror that shows both faces. Thanks to the mirror, it can be understood who is right and who is lying. Alexander is very pleased with the mirror and starts to think about his talisman all the time. He asks the people of wisdom about the mystery of the mirror. Alexander accepts the gifts and returns to his headquarters the next morning. In this picture, Alexander and the Chinese khan are on the throne, and philosophers such as Aristotle, Plato and Porphyry are also shown.

Picture 3: The chapter of Hayretu’l-Ebrar 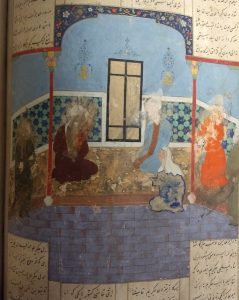 The Hayretu’l-Ebrar is a mathnawi in which Nava’i talks about social, political and moral issues, sharing his opinions while doing so. This section concerns justice, and Nava’i explains the ideal relationship between the rulers and their people, and the fact that the rulers are just and merciful is extremely important for the continuation of the state. At the end of the chapter, the khanate struggle of Gazi Shah is mentioned. Accordingly, when Gazi Shah came to the throne, justice came to the country, the persecution was over, and the ruins were restored. One day, an old lady cried and grabbed Gazi Shah’s jubbah and said that his soldiers had ruined a wheatear in her field. She did not want Shah to get angry with her at that moment: she wanted to bring this complaint to an Islamic court instead. Because Gazi Shah was a just man, he ordered his men to bring a kadi (judge) for the trial. At the end of the trial, the Shah says “I sacrifice my life for the prophet’s decree”. He blindfolds a hundred soldiers with a piece of cloth and gives a sword to the woman. On the other side, he scatters silver and treasures. He says to the woman, take the silver for your loss, but whichever you choose, I definitely accept. In the face of this justice and fairness, the old woman apologized to the Shah and withdrew her complaint. This picture depicts the trial of this old woman and Gazi Shah in the presence of the judge.

Picture 4: The Chapter of Farhad u Shirin 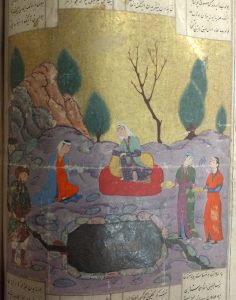 The Chapter of Farhad u Shirin is a mathnawi where Nava’i reimagines part of the tale of Khosrow and Shirin, making Farhad a more prominent character. Here, Mehinbanu and Shirin go to see Farhad because of his success in the construction of the water canal. Mehinbanu offers Farhad plates of jewelry. When Shirin meets Farhad, she thanks him and falls in love with him. As soon as Farhad hears Shirin’s voice, he sighs loudly. Because of this sigh, the wind blows Shirin’s veil open revealing her face. When Farhad sees Shirin’s face, he realizes that this is the face he had seen in the mirror; he goes out of his mind and passes out.

In this picture, we see Mehinbanu and Shirin sitting in front of the canal, Farhad standing on the left side, and the servants bringing presents such as gold, and silver on plates.

(NB: Farhad had found Alexander’s mirror at the beginning of the story and he saw his own future and the face of his beloved in that mirror.) 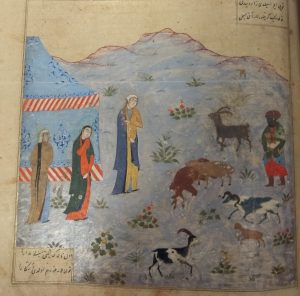 Layla and Qays had been friends since their childhood. They both went to the same school. In time, they fall in love with each other; however, both their families are against this relationship. Because Qays went crazy with the pain and sorrow of this love, the people nicknamed him Majnun which means crazy. Majnun’s father is sad about his son’s situation and he decides to marry him to Nevfel’s daughter. One day, when Majnun is alone at home, he goes back to the mountain. On the way, he meets Layla’s shepherd. He wears the sheepskin given by the shepherd and goes to the tribe where Layla is, dressed as a shepherd. When Majnun sees Layla, he sighs and collapses to the ground, and Layla falls on Majnun. The shepherd takes Majnun to the place where he met him and leaves him there. Hearing of this incident, Majnun’s father brings him home and marries him to Nevfel’s daughter. However, the girl confesses that she loves someone else so this marriage can not happen and Majnun retreats to the desert again. On the same day, Layla is married to İbn-i Selam; however, he faints from the excitement of meeting Layla. When he is taken to another room, thought to be dead, Layla goes out to find Majnun. The two lovers meet in the desert. Layla returns home, while Majnun stays in the desert. This picture depicts the moment when Majnun, who does not want to marry Nevfel’s daughter, meets Layla’s shepherd in the desert after running away from home, and dresses as a shepherd by wearing the shepherd’s hide.

We are very grateful to Funda for her assistance in preparing this blog post. We would also like to note that the folio references above pertain to the manuscript’s foliation, which conforms to its original sequence and not the order introduced during a later rebinding.

On the 12th May the Society held its Annual General Meeting, chaired by RAS President Professor Sarah Ansari. In her President’s address, Professor Ansari highlighted the achievements of the Society over the past year and the strong efforts of staff and Council in facing the continued challenges of the pandemic. 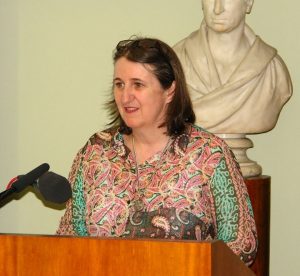 In January, the Society upgraded the AV equipment in the Lecture Theatre and Council Room. This enabled lectures and meetings to be held online with audiences attending and participating via Zoom. The Society held a total of 35 lectures and book launches in 2021, with online participation reaching into the hundreds.

The Journal continued to thrive throughout 2021, receiving 111 submissions from 21 countries. Online, the article which attracted the most interest was “An Illustrated Pilgrimage Scroll in the Collections of the RAS” by Ulrich Marzolph and Mathilde Renauld, which was viewed 325 times.

Since the library’s re-opening in Easter 2021 the Reading Room has seen a steady increase in visitor numbers, with over 100 researcher visits across the year. Library staff also responded to over 280 remote enquiries. The use of online collections reached unprecedented levels; the Digital Library received 13,200 visits from 10,000 users who viewed 45,000 pages. This represented an increase of 10-20% compared to 2020. Successful projects to digitize many of the Society’s Malay manuscripts attracted significant interest from audiences in the Malay world, and the number of online visitors from Malaysia and Indonesia eventually formed the largest cohort of Digital Library users (outstripping visitors from the UK and USA). 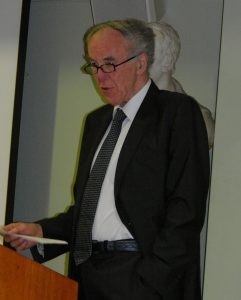 Overall, the Report and Financial Statements show that the fundamental position of the Society is strong and there is confidence that with the support of Council and the goodwill of the staff, the Society will emerge strongly from the COVID years. Mr Knight thanked Dr Ohta, Director of the Society, for her ‘sterling work’ in maintaining an efficient and economical administration during lockdown.

We would like to give our deepest thanks to Mr Knight for his excellent work as Treasurer and we look forward to continuing to work with him as a member of Council. We are delighted to announce that Member of Council Mrs Elizabeth Robb will take over as Treasurer.

Following a brief drinks reception, our guest lecturer crime author Vaseem Khan gave a presentation entitled ‘Killing Gandhi, Dante’s Divine Comedy, and India at the crossroads’. In his illuminating talk Mr Khan covered the assassination of Gandhi, the horrors of Partition and Dante’s unique connection to the city of Bombay. You can enjoy this again via the Youtube link below.