On Tuesday 6 March, we were delighted to welcome Professor Mercedes Volait (Centre National de la Recherche Scientifique) who delivered a lecture titled, “The Domestic Collecting of Islamic Artefacts in 19th Century Cairo: The Meymar Objects at the Victoria and Albert Museum”. Professor Volait explained the origins of the Meymar collection, which comprised Islamic and Middle Eastern objects collected by Dr Meymar in Cairo in the 1860s. The collection was exhibited at the Exposition Universelle in Paris in 1867, from where the South Kensington Museum (now the Victoria and Albert Museum) made a large number of purchases to enhance their growing collection of Islamic art, becoming a cornerstone of the museum’s collections in this area. Professor Volait’s fascinating lecture was enriched by some wonderful images of objects from the collection, and was followed by a Q&A session with the audience and a reception.

On Thursday 8th March we were treated to another fascinating lecture when Dr Peter Webb, from the University of Leiden,  lectured on “Arab Origins: Identity, History and Islam”. Dr Webb has an extensive knowledge upon this topic but in the lecture he mainly focused on the use of the word Arab in Pre-Islamic times – who it may have denoted and what may have been meant by the term. He provided some excellent background into the people of the area we now know as Arabia and the Middle East, and how the term Arab has changed in its meaning and designation through succeeding centuries.

We are grateful to both these speakers for coming to deliver lectures at the Society. Next week sees the Book Launch of Robert Irwin’s book, “Ibn Khaldun: An Intellectual Biography”. In this book Robert Irwin provides an engaging and authoritative account of Ibn Khaldun’s extraordinary life, times, writings, and ideas. Irwin tells how Ibn Khaldun, who lived in a world decimated by the Black Death, held a long series of posts in the tumultuous Islamic courts of North Africa and Muslim Spain, becoming a major political player as well as a teacher and writer. Closely examining the Muqaddima, a startlingly original analysis of the laws of history, and drawing on many other contemporary sources, Irwin shows how Ibn Khaldun’s life and thought fit into historical and intellectual context, including medieval Islamic theology, philosophy, politics, literature, economics, law, and tribal life. Because Ibn Khaldun’s ideas often seem to anticipate by centuries developments in many fields, he has often been depicted as more of a modern man than a medieval one, and Irwin’s account of such misreadings provides new insights about the history of Orientalism. In contrast, Irwin presents an Ibn Khaldun as a man of his time—a devout Sufi mystic who was obsessed with the occult and futurology and who lived in an often-strange world quite different from our own. 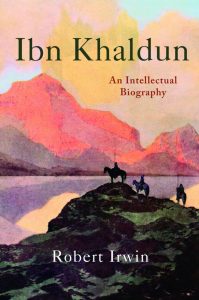 The book launch will take place on Thursday 15 March from 6pm and all are welcome to attend.

Our next lecture will be on Tuesday 20 March at 6.30pm when Professor Zeynep Yürekli-Görkay will lecture on “An Ottoman Sense of Place: Topographical Illustration between Europe and Iran”. Again we hope that many of you will be able to attend.