Please note that this event has been postponed to later in the year. We apologise for any inconvenience. 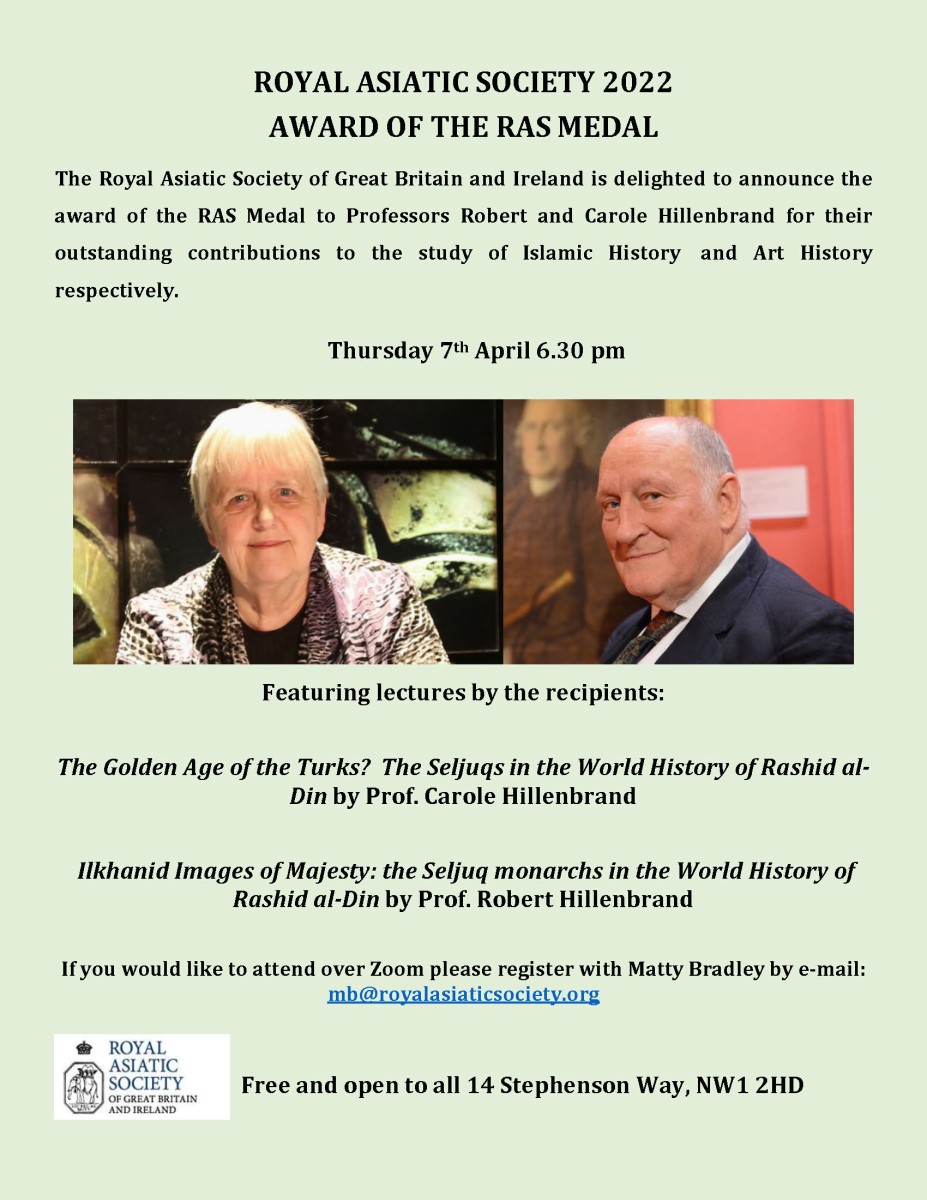 Professor Carole Hillenbrand was appointed Professor of Islamic History in 2000 at the University of Edinburgh and was awarded an OBE for services to Higher Education in 2009. In 2005, she was awarded the King Faisal Prize for Islamic Studies, (the first non-Muslim to be awarded this prize) and  in 2016 the British Academy/ Nayef Al-Rodhan Prize for Transcultural Understanding. Her research interests include the Crusades, the Seljuqs of Iran and Turkey,  and  medieval Muslim political thought, especially the work of al-Ghazali.  She is the author of five major books, the editor of three major volumes and numerous articles.  Her book  The Crusades: Islamic Perspectives published by Edinburgh University Press in 1999, was the first to examine in depth the Crusades from the Muslim point of view. Her most recent edited volume, expected in August 2019, is entitled Syria in Crusader Times: Conflict and Co-existence.

Professor Robert Hillenbrand is Professor of Art History at the University of St. Andrews and is Honorary Professorial fellow at the University of Edinburgh where he was appointed Professor of Islamic Art in 1989. He is a prolific scholar whose interests focus on Islamic architecture, painting and iconography, with particular reference to Iran and early Islamic Syria. His nine books include the prize-winning Islamic Architecture: Form, Function and Meaning, (1995), Islamic Art and Architecture (1999), The Architecture of Ottoman Jerusalem: An  introduction (2002) and Studies in Medieval Islamic Architecture (2 vols.2001-2). In addition, he has co-authored, edited and co-edited twelve books including The Art of the Saljuqs in Iran and Anatolia (1997), Persian Painting from the Mongols to the Qajars, (2001), Shahnama: The Visual Language of the Persian Book of Kings, (2004) and Image and Meaning in Islamic Art, (2005) and Ferdowsi , the Mongols and the History of Iran: Art, Literature and Culture from Early Islam to the Qajar Persia, (2013). He has also published some 170 articles on aspects of Islamic art and architecture.