On Tuesday 29th May, Dr Ashmita Khasnabish (Lasel College,  Massachusetts) lectured at the Royal Asiatic Society on “Indian Imagination in a Postcolonial Context”, a talk based on her new monograph, Negotiating Capability and Diaspora: a Philosophical Politics.  Dr Khasnabish explored the potential in Amartya Sen’s theory of capability, particularly the emphasis on personal will and freedom, before introducing Sri Aurobindo, an Indian philosopher, whose work considers a “religion of humanity”.  Dr Khasnabish also introduced the Indian novelist, Jhumpa Lahiri, and discussed how her novel, Namesake,  could be seen as a product of the Indian postcolonial imagination.

On Thursday 31st May the Society kindly hosted the launch of my new book, Feart. This book, part poetry, part prose, loosely based on my childhood, explores emotion in childhood through the externalisation of fear into a creature, the Feart, who is the companion to a girl as she grows up. The book is a handcrafted, limited edition made from handmade Fairtrade paper and recycled card. It was a joy to share some of the pieces with friends and Fellows.

Cataloguing of the archival material continues. I am still working on the catalogue for the Universities Prize Essay Competition which was awarded by the Society from the 1930s to the 1970s. Alongside that, a couple more small collections of Personal Papers have also been catalogued on to Archives Hub:

The Papers of Sir Michael Cavanagh Gillett consist of two manuscripts written by Gillett during his time as Consul in Kashgar. These manuscripts are “Some Notes on the Blue Turkish Tongue” and “A Practical Introduction to Turki, Part I & Part II”. Michael Cavanagh Gillett was born on 12 July 1907. He joined the Consular Service serving in China from 1929-1953 being stationed at Peking, Canton, Hankow, Nanking, Kashgar, Tengyueh, Chungking and Shanghai. He also served in Los Angeles 1954-1957, and Afghanistan 1957-1963. He was awarded a CMG in 1951 and KBE in 1962. He contributed articles to the Journal of Royal Asiatic Society (North China Branch). He retired in 1963 and died on 20 January 1971. 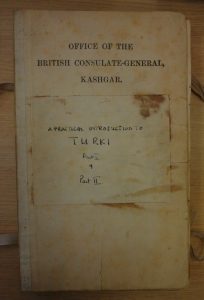 “A Practical Introduction to Turki, Part I & Part II” from the “Office of the British Consulate-General, Kashagar” has a further title inside, “A Practical Introduction to Turki with Special Reference to Kashgar Usage.”by “M.C. Gillett & Pandit Bihari Lal with the help of the staff of His Majesty’s Consulate-General, Kashgar”. Also handwritten is “Author’s Copy” and signed MC Gillett. The manuscript is dedicated to the memory of Geoffrey Redmayne Turral, First British Consul in Urumchi, 1943-1946, and a connoisseur of Central Asia. Within the preface, Gillett explains that he wrote the book as he felt when in Kashgar that there was no book suitable for a beginner of the Eastern Turki tongue. The book was written by the end of 1944 with additions and alterations in 1945. The dedication suggests further alterations in 1946. 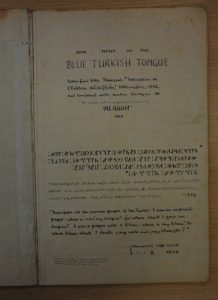 “Some Notes on the Blue Turkish Tongue” compares vocabulary from Vilh. Thomsen’s “Inscriptions de l’Orkhon déchiffrées” Helsingfors, 1896, with modern Karhgari.  Gillett adds, “The whole rather superficially done by MC Gillett 1946”. This is a handwritten manuscript within a card cover.

The Papers of Clinton Thomas Dent also consist of two manuscripts. Clinton Thomas Dent was born in 1850 and educated at Eton and Trinity College, Cambridge. He trained as a surgeon becoming Senior Surgeon at the St George’s Hospital Medical School, London, Consulting Surgeon at the Belgrave Hospital for Children, Chief Surgeon to the Metropolitan Police from 1904, and a Fellow of the Royal College of Surgeons. However he also had a love of mountaineering and was one of the few British climbers to attempt the unclimbed peaks in the Alps including the Aiguille du Dru (3,754 m), a steep granite peak in the Mont Blanc massif. With British alpinists such as Albert Mummery, A. W. Moore and D. W. Freshfield, Dent was involved in the pioneering of climbing in the Caucasus, where he made the first ascent of Gestola (4,860 m) with W. F. Donkin in 1886. He was President of the Alpine Club from 1886-1889. Dent died in 1912 from a virulent septicaemia.

“The Ascent of Tsiteli (Central Caucasus) by C.T. Dent (Read before the Alpine Club June 1898)” is a handwritten draft manuscript of the Paper given by Dent with many amendments. 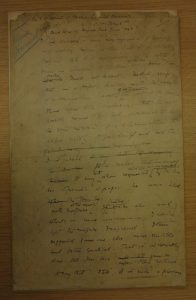 The other manuscript that we have of Dent’s consist of chapters for a book on climbing in the Caucasus. Unfortunately it appears that the manuscript is incomplete and not correctly ordered. It is typed with handwritten amendments and handwritten pages inserted. 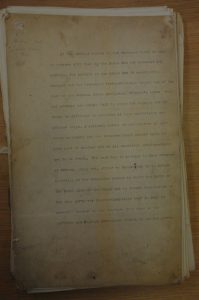 Our lecture next week continues with the theme of writing. Umberto Bongianino from Oxford University will lecture on “Like Sweet-Smelling Blooms: Arabic Calligraphy in the Islamic West”. We hope that you will be able to join us on Thursday 7th June at 6.30pm, to hear this talk.