This week’s blog post has been kindly written by the Director of the Society, Dr. Alison Ohta, and Jenny Attemark, who is the Curator and Archivist at Tekniska museet – The Swedish National Museum of Science and Technology. In December we announced the exciting news that one of the items from our collection, the Tod Panchanga Scroll, had been selected to be exhibited at the Tekniska museum’s forthcoming exhibition, ‘Moving to Mars.’ Further information about this can be read below.

On the 8th of December I flew to Stockholm to deliver the Tod Panchanga Scroll to the Tekniska Museum, The Swedish National Museum of Science and Technology, for their forthcoming exhibition ‘Moving to Mars’, which is a continuum of one that had been held at the Design Museum, London in 2019. You may quite rightly  wonder why our Panchanga Scroll, a Hindu almanac compiled in the nineteenth century was chosen for exhibition- it is there because it records the movement of Mars in 1818 and shows the importance of this planet in Hindu astrological charts.  The almanac was presented to the Society by Colonel Tod, who was the Society’s first librarian and author of ‘The Annals and Antiquities of Rajasthan,’ first published in 1829.

The scroll is small measuring only 12 cm in width but it is 205.74 cms in length. It has three painted panels with a bare-footed grey-blue Krishna (with the arms holding what appears to be a flute) in the centre, flanked by two female figures (gopis) on either side. Below this is a panel depicting the deity Ganesh, flanked by Riddhi and Siddhi. The lower-most of the three panels depicts two women on the left hand side of the picture, and a cow on the right, with a small rectangle bearing the word ‘Ram’ in Devanagari script in the top-upper half in the middle of the panel. Below these three panels, is a panel containing the opening portion of the almanac. This fourth panel is written in black ink, with a narrow painted border to its left and contains zodiac-related information including the position of Mars. It also tells us that the almanac/horoscope is for the year Samvat 1875, Saka 1740 (corresponding to c. 1818 A.D.)

I arrived in the evening and as it was late and the museum closed, I had to deliver the scroll for safekeeping overnight to the art transport specialists. The hotel was deserted with only 3 guests for 300 rooms.  However, as our lectures are now accessible on Zoom, I was able to attend Fucshia Hart’s lecture at 6.30pm/7.30pm Stockholm time. The next morning, I collected the scroll and took it to the museum which is situated in a  park on the shores of Djurgårdsbrunnsviken Bay.

I installed the Panchanga with Jenny Attemark, the Curator, who has also very kindly contributed to this blog. She explained that the anticipated opening date of the 25th December had been postponed until the 6th of January because of Covid and it has been delayed again recently.

After installation,  I went for a long walk along the shore towards the city centre before it became too cold and dark. Stockholm was empty, very few people were about and the shops and restaurants were closed. The next morning I departed on a very crowded flight for London arriving in time to attend our Council Meeting on the 11th December at 4.30pm. The exhibition still remains unable to open because of Covid restrictions but I am sure that once it does, this small scroll will attract visitors’ attention showing that Mars is and has always been relevant whether you are in the cold north in the twenty first century or the warm climes of the south in the nineteenth.

The Moving to Mars Exhibition: 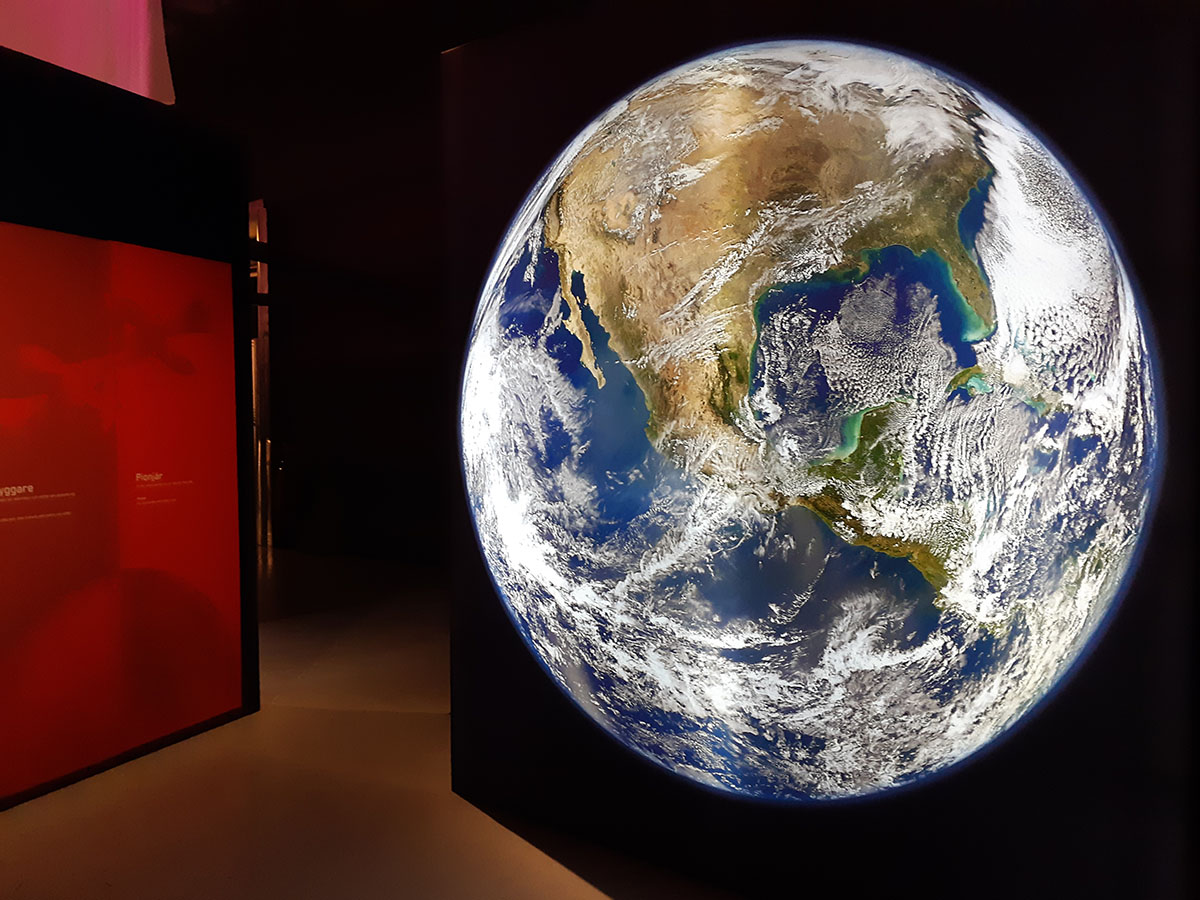 The Tekniska museet in Stockholm is the first stop on the tour for the exhibition, ‘Moving to Mars’ by the Design Museum in London. This exhibition tells us about Mars and humans. For thousands of years, this planet has fascinated people. It has been depicted on stone carvings, in books and in art. In popular culture, there are many examples of movies and music where Mars is a central element. Going forward in time, as technology developed, humans were able to study the planet through telescopes, and later came satellites and rovers. There are now even thoughts about colonizing Mars. Could humans really live on this hostile planet? One of the key exhibits in the exhibition is the Hassell Mars habitat inflatable living pod where visitors can go in and experience what a home on Mars could look like from the inside.

The object from the Royal Asiatic Society in this exhibition is a beautiful Panchanga, or Hindu astronomical almanac from India, c.1818. Descriptions of Mars appear in some of the oldest Indian texts. Panchanga’s like this were constructed to record and predict the movement of the heavenly bodies that were known at the time. An inscription in this almanac tells us that it is a horoscope for the year corresponding to about 1818.

Next to the almanac is a book from Uppsala University Library, ‘About the existence of several worlds: dissertation under Anders Celsius.’ Anders Celsius lived between 1701-1744. Despite his short life, he became one of the most prominent figures in Swedish science during the 18th century. For example, the thermometer (Celsius scale) he designed is still used today. Celsius was also the initiator of the first astronomical observatory in Uppsala, which was completed only two years before his death.

This thesis was written in Latin during the first half of the 18th century. It discusses theories of life on other planets such as Mars, Jupiter and Venus, planets that had been observed at the time. The author was convinced that there must have been life on all celestial bodies. He wondered why God would otherwise have created these mighty planets, if they were not destined for life?

This exhibition was built at Tekniska museet during the Covid-19 pandemic. It has been a rather difficult period to finish an exhibition under these circumstances. At first, the exhibition was to open in the beginning of July 2020. But due to the pandemic, the museums in Stockholm (like in many other parts of the world) had to close their doors to visitors. It has been a challenge to plan the project because of the future being so uncertain. All objects had to be stored for several months until we could finish the build and put the objects on display.

Book Launch of The History of British Diplomacy in Pakistan:

On Thursday, 19th January at 6.30 pm, the Society was pleased to hold a launch for Professor Ian Talbot’s most recent book, ‘The History of British Diplomacy in Pakistan,’ Taylor and Francis, 2021. Professor Talbot, who is a member of the RAS Council, was joined by Professor Roger Long (Eastern Michigan University) and Dr. Rakesh Ankit (Loughborough University) to discuss aspects of this first account of the British diplomatic mission in Pakistan in the aftermath of Empire.

Professor Talbot’s research drew on a wealth of archival material and interviews with diplomats giving interesting and valid insights into the lives of the participants while charting the change from High Commission to Embassy. The launch was very well attended and the discussion was followed by several thought provoking questions from the audience. A recording will shortly be available on the Society’s Youtube channel: Royal Asiatic Society Of Great Britain and Ireland – YouTube

The Society would like to thank Professor Talbot, Professor Long and Dr. Ankit for their participation.