Last week’s blog post showing some of John Cecil Cloake’s photographs of Iraq provoked a number of responses from readers. It is always interesting to read people’s reactions to the blog and to learn more about the subject matter about which I have written. In this week’s blog post, RAS President, Tony Stockwell, in response to last week’s post, takes us from John Cecil Cloake, and his role as biographer of Sir Gerald Templer, to wider issues of the history of Malaysia. My thanks go to Tony for taking the time to write this piece:

“John Cloake’s principal enthusiasm in retirement was the history of Richmond and its neighbourhood about which he published extensively.  In addition, at the invitation of Lady Templer he wrote the biography of Field Marshal Sir Gerald Templer ,”Templer: Tiger of Malaya” (London, Harrap, 1983).  Cloake seemed a surprising choice.  His career had been in the diplomatic service and he had met Templer only once (lunch at the National Army Museum, Templer’s passion in retirement).   Nevertheless, the project went ahead and Lady Templer gave Cloake full access to the papers of her late husband.  Cloake’s biography has not lost its vitality. It remains a very ‘good read’. 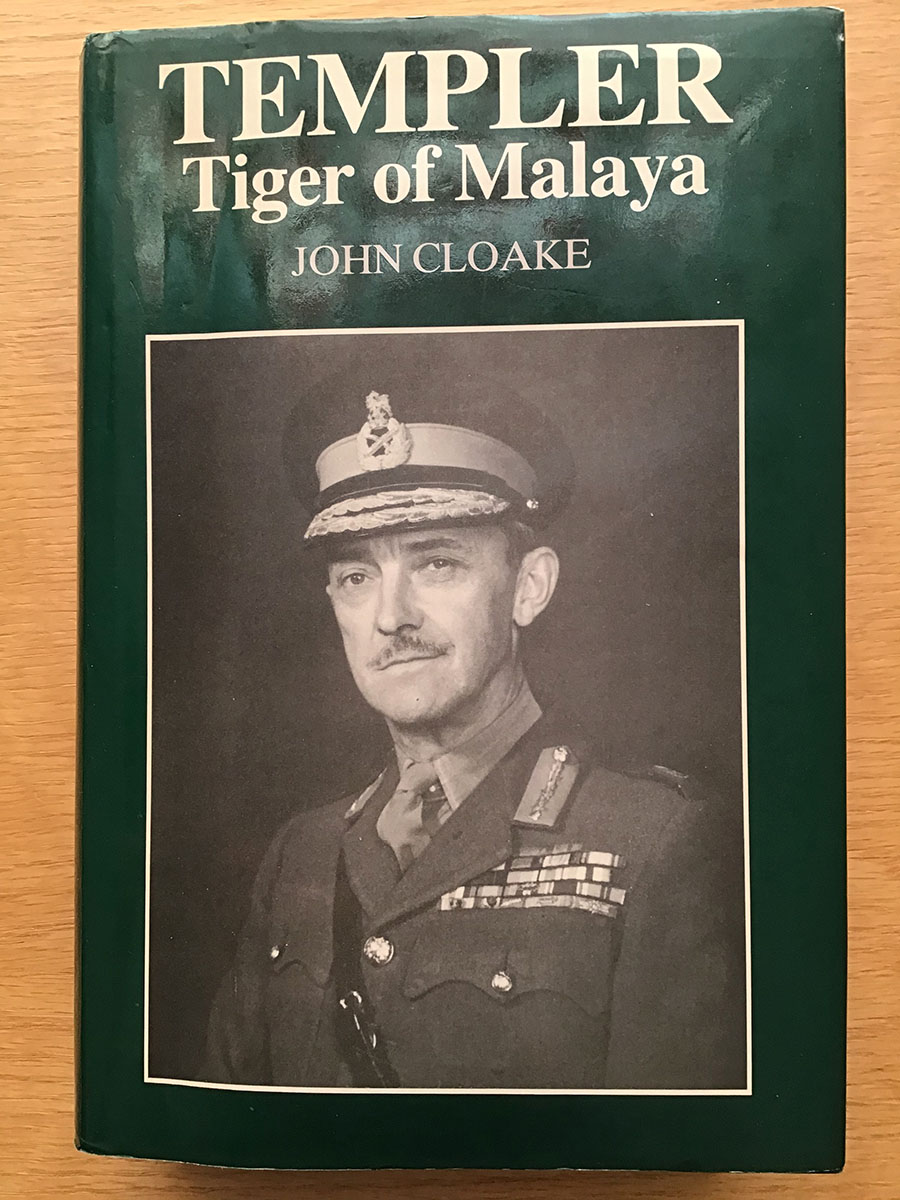 Templer’s reputation as ‘Tiger of Malaya’, rests on a relatively brief term (1952-54) as High Commissioner and Director of Operations during the Communist Emergency (1948-60).  Cloake devoted one third of the 500-page biography to these two years.  Templer was appointed at a particularly bleak period following the assassination of the previous High Commissioner, Sir Henry Gurney.  He was by no means the government’s first choice.  Churchill and his secretary of state at first preferred Sir Hubert Rance (the last governor of Burma) but, when they eventually settled on Templer, they ensured, by appointing him both high commissioner and director of military operations, that he would wield and enjoy greater power than any of his predecessors.

Templer  cracked on with counter-insurgency operations.  Whether by ‘winning hearts and minds’ or by ‘screwing down the people’, the results were spectacular. In approximate figures the recorded number of incidents involving communist and security forces dropped from 6,000 in 1951 (the year before Templer’s appointment) to 1,000 in 1954 (the year when he left Malaya).  Over the same period, annual casualties declined: security forces from about 1,200 to 240 and civilian deaths from around 1,000 to 185.  The strength of the Malayan National Liberation Army diminished from an estimated high of over 7,000 to 3,400.  As security improved, so emergency regulations were relaxed and plans for police reform, land settlement, and elections advanced with a view to eventual independence.

Nevertheless, Templer’s methods were frequently high-handed and counter-productive (notably collective punishment). They exacerbated communal antagonism and provoked fury in liberal circles in Britain. The eminent sinologist, Victor Purcell, led the charge. On retiring from the Malayan Civil Service in the late 1940s, Purcell had been appointed lecturer in Far Eastern History in Cambridge.  He also acted as constitutional adviser to the non-communist Malayan Chinese Association. As Malaya moved towards self-government, Purcell laid into Templer.  Templer’s regime, Purcell wrote in Malaya; Communist or Free (1954), was ‘a terrifying combination of crassness and voodoo’.  Their exchanges were vitriolic and splenetic with Purcell making a bit of a fool of himself in public and Templer spitting teeth in private. Purcell’s crusade eventually fizzled out in a damp-squib of a discussion attended by some 50 more or less ignorant men at the Athenaeum in May 1954.  By this time Templer had stood down from Malaya and the eyes of the world were focused on Dien Bien Phu.

While writing the three Malayan chapters of  Templer’s biography, Cloake wisely drew upon Anthony Short’s The Communist Insurrection in Malaya 1948-1960.  Short had served in Malaya as a national serviceman and, on being appointed to the History Department of the University of Malaya, he had been commissioned jointly by the University and Government

of Malaya ‘to write, for publication and without censorship, the history of the communist insurrection’.  To this end he was provided with every assistance by the Malayan government including full access to their confidential and secret papers. Short submitted his  completed manuscript in 1968.  After three years of silence, the Malaysian government reneged on the contract as did Oxford University Press notwithstanding the fact that the Press had read and already accepted the manuscript for publication. The book was eventually published in Britain by Frederick Muller in 1975.

One can suggest all manner of reasons for this volte face on the part of the Malaysian government but the upshot was, as John Bastin put it in his foreword to the book, the public had been ‘denied for more than five years the opportunity of reading what is unquestionably the most authoritative and balanced book on the Communist Insurrection in Malaya’. Far from being the last word on the subject, however, Short’s book encouraged further research projects from a range of angles as bit by bit the United Kingdom’s fifty-year rule was relaxed and hitherto embargoed material at The National Archives (formerly the Public Record Office) was opened to scrutiny.”