This Thursday (18th November) marked the anniversary of the death of the Oriental Scholar, Lieutenant-Colonel James Tod (20 March 1782 – 18 November 1835).

Born in London, Tod joined the East India Company as a Military Officer and travelled to India in 1799 as a Cadet in the Bengal Army. During his time in the army, Tod quickly rose through the ranks becoming a Lieutenant in May 1800 and in 1805 was appointed as an aide-de-camp to family friend Graeme Mercer who worked as an Envoy and Resident to the Court of Daulat Rao Sindhia.

Rather than being situated permanently in one place, the royal court frequently moved and in 1806 the court travelled through the southern frontier of Jaipur to Udaipur. Tod used the opportunity of moving with the court to undertake various topographical and geological surveys of the region, often employing other people to do some of the field work. These studies culminated in 1815 with the production of a map of central India which Tod presented to the Governor-General, the Marquis of Hastings. This map was considered strategically important to the British as they were soon to fight the Third Anglo-Maratha War with Tod’s knowledge of the area leading to him working in the intelligence department during the conflict.

Once the conflict had drawn to a close in 1818, Tod was appointed political agent for various states of western Rajputana, in the northwest of India. His task was to help unify the region under the control of the East India Company. During this period Tod meticulously collected royal genealogies, inscriptions, coins, artefacts, manuscripts and sketches of monuments.

Tod resigned from his post as political agent in 1822 due to ill health and returned to England in 1823. Once settled in England, he became involved with the founding of the RAS and worked for a period as the Society’s Librarian. Tod was actively involved in the academic pursuits of the Society and contributed several articles to the Society’s Transactions on subjects mostly related to Greek influences on India.

Tod also published a number of academic works about Indian history and geography using information that he had collected along his travels. His most notable work was the ‘Annals and Antiquities of Rajast’han’ (1829) which received widespread acclaim and was followed three years later by a second volume. This book helped define how Europeans at the time viewed Rajasthan, and has remained influential up to the present day in both Europe and India.

Both volumes were supported by various topographical drawings and illustrations that Tod commissioned during his time in India. The responsibility of making topographical records of the expeditions fell to Tod’s cousin Captain Patrick Waugh, later Major (1788-1829) who served as Tod’s aide-de-camp in Udaipur in 1819. Waugh’s watercolours provided the basis for all topographical views engraved in the Annals which were then redrawn by professional artists in England. For the architectural drawings, Tod was indebted to the India artist Ghasi who produced most of the drawings. Very little credit is given to Ghasi for his work with Tod merely stating that Ghasi was ‘a native artist who labours at Udaipur for the same daily pay as a tailor, carpenter, or other artisan’.

Tod suffered with ill-health for a number of years and had an apoplectic fit in 1825 as a result of over-work. Following a chest-complaint, Tod died on the 18th November 1835. Whilst he generously donated a number of manuscripts to the Society during his lifetime, the bulk of his collection was presented to the Society by his executors in 1851. This included detailed paintings, drawings and engravings of topographical scenes from Rajasthan which formed the basis for the Annals. A selection of these can be viewed on the Society’s Digital Library.

The Society also has a large collection of manuscripts which were acquired by Tod during his time in Rajasthan and would also help inform his work on Annals. Several of these manuscripts are in Rajasthani and include historical and genealogical works about significant Rajput dynasties, and official documents copied at Tod’s request, as well as poetic works from the Jain tradition. Some of these can also be viewed on the Digital Library.

For the Society’s bicentenary in 2023, we will be celebrating and interrogating James Tod’s contribution to the understanding of Indian history (and to the development of the Society).  Dr Norbert Peabody (University of Cambridge) is currently leading a major project to publish a new edition of ‘Annals and Antiquities’, complete with a scholarly commentary and critical essays. The new volumes will be published to coincide with the bicentenary and will contribute to the Society’s reflections on the past two hundred years of Oriental studies in the British Isles. 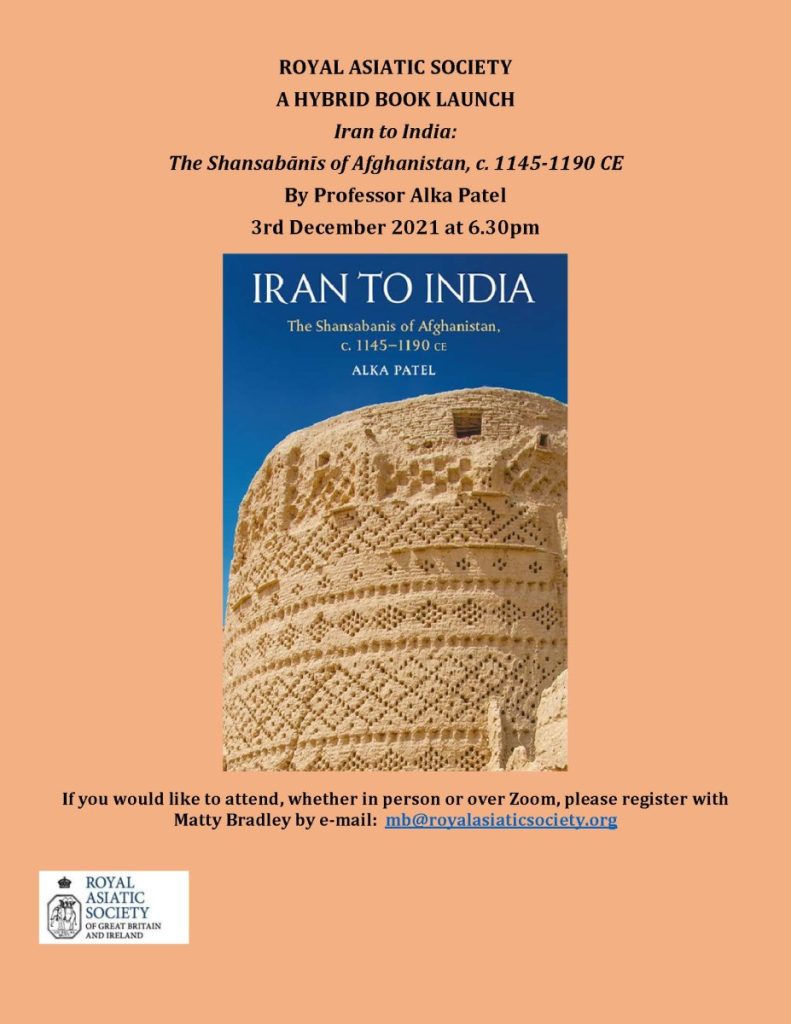 A reminder that on Tuesday 23rd November at 6:30pm, Amir Parsa will be giving a hybrid lecture on ‘Patriarchal Honour, Women, and War: The Concept of ‘Namus’ in Naderid Iran’s Military Narratives’. 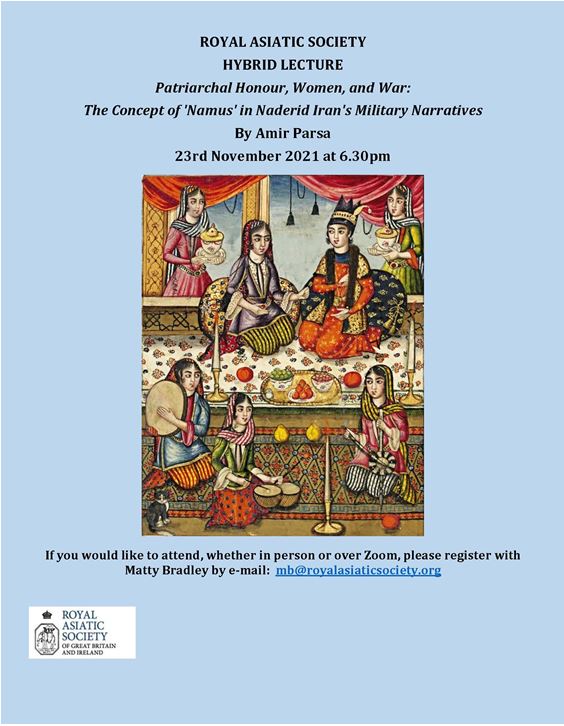 Please email mb@royalasiaticsociety.org to register for either event. As both of these will be hybrid events please do not forget to state your preference for attending in-person or virtually. We hope that many of you will be able to join us!