Last night (11th January) Professor Christopher Fuller gave the first RAS lecture in 2018, speaking on the history of anthropology in India and how research on the Indian sub-continent interacted with ideas circulating in Europe in the late nineteenth and early twentieth century.

It was interesting to hear about some of the pioneers in anthropology and their ideas on ethnicity and race. Professor Fuller particularly concentrated on Herbert Hope Risley (1851-1911) who as an Indian civil service administrator also undertook extensive anthropological research, particularly within Bengal.  In the library collections we have copies of some of Risley’s books including the “Tribes and Castes of Bengal: Ethnographic Glossary” printed in Calcutta (Kolkata) in 1891.

Professor Fuller also mentioned other anthropologists working in India at the time including  Denzil Ibbotsen. We also hold some of his anthropological publications within our collections including this,  “A Glossary of the Tribes and Castes pf the Punjab and North-West Frontier Province 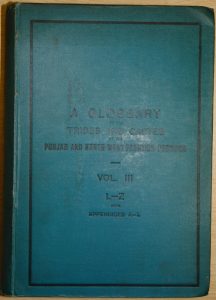 This is a later publication, published in Lahore in 1914, but as the frontispiece reveals, it is based on data from the Census report for the Punjab in 1883. 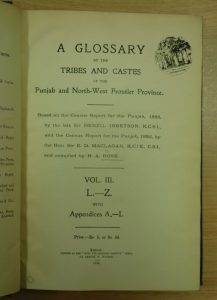 One further name, that Professor Fuller mentioned, caught my attention – that of William Crooke (1848-1923). We not only have some of his books, both on anthropology and folklore, but I recently discovered some archival material connected to him. Crooke’s anthropological publications include “The Native races of the British Empire: Northern India”, published  in London in 1907, with accompanying photographic plates. 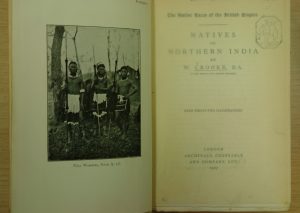 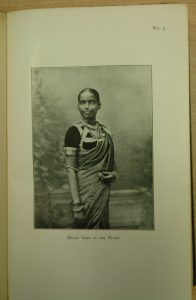 The archival material I found is a series of Religious Songs in Romanized Hindi, mostly signed by the Pandit Ram Gharib Chaube, probably collected for William Crooke. Below are the title page I found with the Papers and one example of a song and its translation: 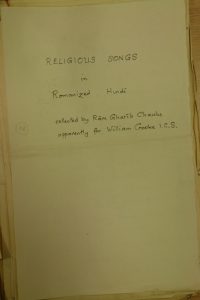 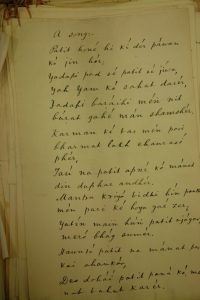 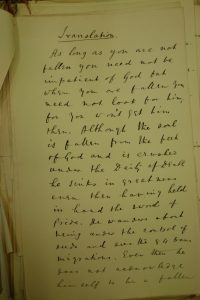 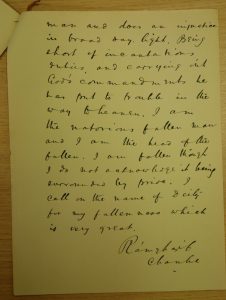 When I discovered this material a few months ago, I was also interested to discover that we had a publication within our Collections that explored the relationship between these two men: “In Quest of Indian Folktales: Pandit Ram Gharib Chaube and William Crooke” by Sadhana Naithani. The archival material that the author had used as source material was an unpublished collection in the archives of the Folklore Society in London. I managed to find some contact details for the author and sent her a list of the material that we have. She believes this is probably more un-researched material and would be keen to spend time with it.

Next week we are hosting two events. On Wednesday 17th January there will be a launch of the latest three publications by the RAS. These are:

The evening will commence at 6.30pm with an introduction by Professor Francis Robinson. Refreshments will be available from 6pm to give you chance to browse the books before the evening commences.

Our next Lecture will be on Thursday 18th January at 6.30pm, when Dr Mark Condos from Queen Mary University London, will lecture on “Anarchists, Revolutionaries and Franco-British Imperial Policing in French Chandernagore, 1905-1930”. We look forward to welcoming you at both events.