May I start this blog by wishing all our Readers a Happy New Year. As we move into 2019, the Royal Asiatic Society looks forward to another year of welcoming people to the Society for its lecture programme and to undertake work with our collections. Our first lecture of the New year took place on Thursday, 10th January when Dr. Cailah Jackson gave a lecture entitled ‘The Arts of the Book in a Time of Conflict.  Manuscripts of Late Medieval Konya’.

Dr Jackson’s study is of manuscript production and patronage in southern Anatolia in the 14th century. She discussed the illumination and script of several manuscripts which are now kept in the Mevlana library in Konya. This subject has remained for the most part unchartered territory and her research has opened up new directions in the field.  Dr.Jackson’s lecture presented new and stimulating material making an extremely important contribution to our understanding of manuscript production in this period.  We look forward to her forthcoming book on the subject.

In reflecting on the lecture I have been looking through the Collections to discover what we may have about Konya. We have several books but no original materials. I expanded my research to the whole of Turkey. We have several Ottoman manuscripts but I wanted to save writing about those until later in the year. We are fortunate to have a placement student from Sussex University starting with us in a few months and we are hopeful that she will undertake some research on these manuscripts.

So I continued my search and came across a small article written by one George Hale. In it he describes a tumulus which he explored to the North of the ruins of ancient Sardis and compares his experience with a description made by Herodotus. Here is the article: 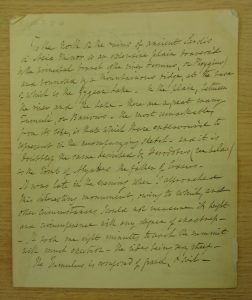 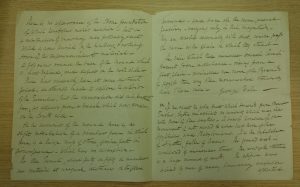 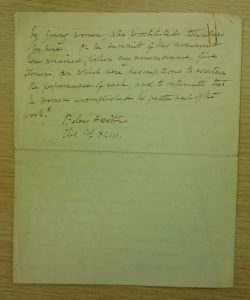 It is not easy to read the handwriting so here is a transcript of the description:

“To the north of the ruins of ancient Sardis in Asia Minor is an extensive plain travers’d by the principal branch of the river Hermus, or Phoygius, and bounded by a mountainous ridge, at the base of which is the Gygsan Lake. In the plain, between the river and the Lake – there are a great many Tumuli, or Barrows. The most remarkably from  its size, is that which I have endeavour’d to represent in the accompanying sketch [unfortunately not with the Paper] – and it is doubtless the same described by Herodotus (see below) as the tomb of Hyakes, the father of Crasus.

“It was later in the evening when I approached this interesting monument, owing to which, and other circumstances I could not measure its height and circumference with any degree of exactness. It took me eight minutes to reach the summit with much exertion – the sides being very steep.

“The Tumulus is composed of gravel, & soil. There is no appearance of the stone foundation of which Herodotus makes mention – but a substraction of masonry may probably exist which is now buried by the sinking & rolling down of the superincumbent materials – a foss runs round the base of the mound which is most defined, and deepest on the north side.

“There has evidently been, at some distant period – an attempt made to explore the interior of the Tumulus, but the excavation did not penetrate far, as appears from a breach which now remains on the South side.

“On the summit of the mound there is a slight indentation of a circular form in which there is a large mass of stone, of nine feet in circumference – which has no inscription.

“The other Tumuli, about forty or fifty in number are scatter’d at unequal distances in the plain around – and have all the same general features – varying only in their magnitudes. They are cover’d externally with short, coarse grass the same as the plain in which they stand.

“The view which these immense conical Tumuli present from a distance – rising from a flat plain – reminded me more of the Pyramids of Egypt than any other monumental structures that I have seen.

Hale then proceeds to quote the passage from Herodotus which he equates with his find.

This article would be fairly easy for me now to catalogue after reading and discovering its contents. There are still a couple of mysteries that I am hoping some blog reader will be able to help clear up. Firstly who was George Hale? It does not appear that he was a Fellow of the Royal Asiatic Society and we do not seem to have any more work by him. A search of the Internet tends to bring up George Ellory Hale – the American astronomer – whose profile does not fit with this article. Further searching about archaeology and Sardis brings us potentially the name of George Dennis, an nineteenth century explorer who mostly worked on his own – again, not really helpful. So, if anyone can enlighten me as to this George Hale I would be very grateful. The second is a question of date – the paper, ink and presentation suggest this is from the nineteenth century. And the paper is watermarked for 1830, which is a very helpful clue. But it would be good to have some more accurate date as to when this expedition took place to add to the catalogue details. So, again if anyone can help…

Before finishing this blog post, I must remind that the lecture by Deborah Freeman Fabid, scheduled to take place on Tuesday 22 January has been cancelled. Please visit our website to find our more details of forthcoming lectures.