The Society is delighted to have received a small collection of personal papers, maps, and articles pertaining to Gerald Tibbetts (1926-1999), known as a scholar of the early modern Arab world and especially of the history of Arab navigation. The collection was donated by his family.

Gerald Tibbetts published two important monographs, both under the auspices of the Royal Asiatic Society: Arab Navigation in the Indian Ocean before the Coming of the Portuguese (1971) and A Study of the Arabic Texts Containing Material on South-East Asia (1979). Gerald Tibbetts also served on RAS Council between 1985 and 1988, and after his death, the Society’s Journal published an obituary (which can be found here). The library periodically receives enquiries about Gerald Tibbetts’ books, and we were especially keen to acquire this archival material due to his long association with the Society. 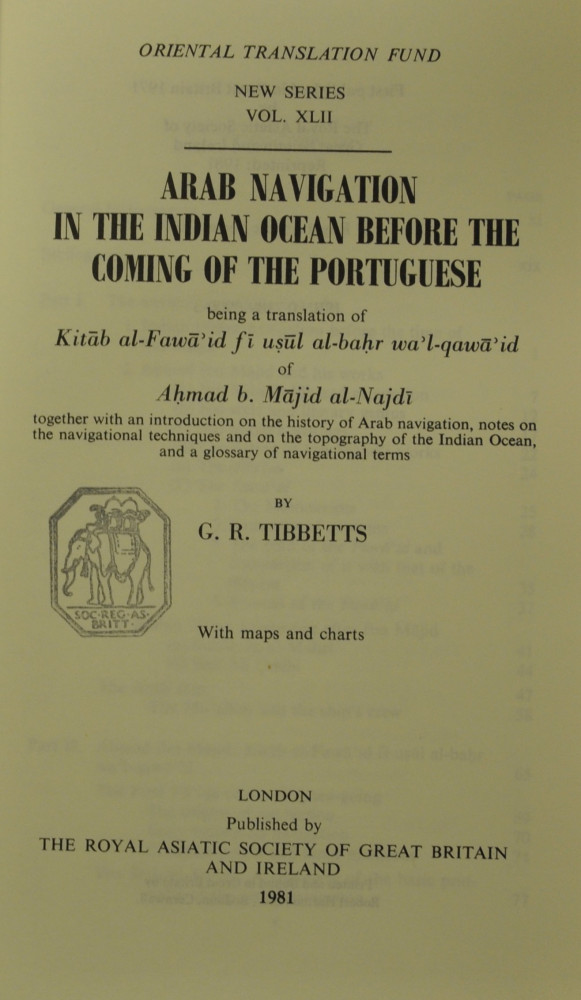 The collection includes the text of a lecture Gerald Tibbetts gave at the Society on Thursday 12 December 1968, reflecting the research which informed the book published in 1971. There are also offprints of articles by himself (and others) including his annotations, corrections, and comments.

Besides his academic work, one of the most prominent projects Gerald Tibbetts was involved with was The Sindbad Voyage, a project in 1980-81 led by the explorer Tim Severin, who specialized in recreating ancient voyages. The 1980 Heritage of Oman Festival described the project as follows:

Tim Severin and his crew will set sail from Oman aboard the replica of an early Arab trading vessel to begin an eight month voyage to China. In a wooden ship held together only by coconut rope, Tim Severin will be investigating the legendary voyages of Sindbad the Sailor by tracing the age-old sea route of the Arabs to the Orient, his vessel guided by the stars in the manner of the early Arab deepsea navigators… 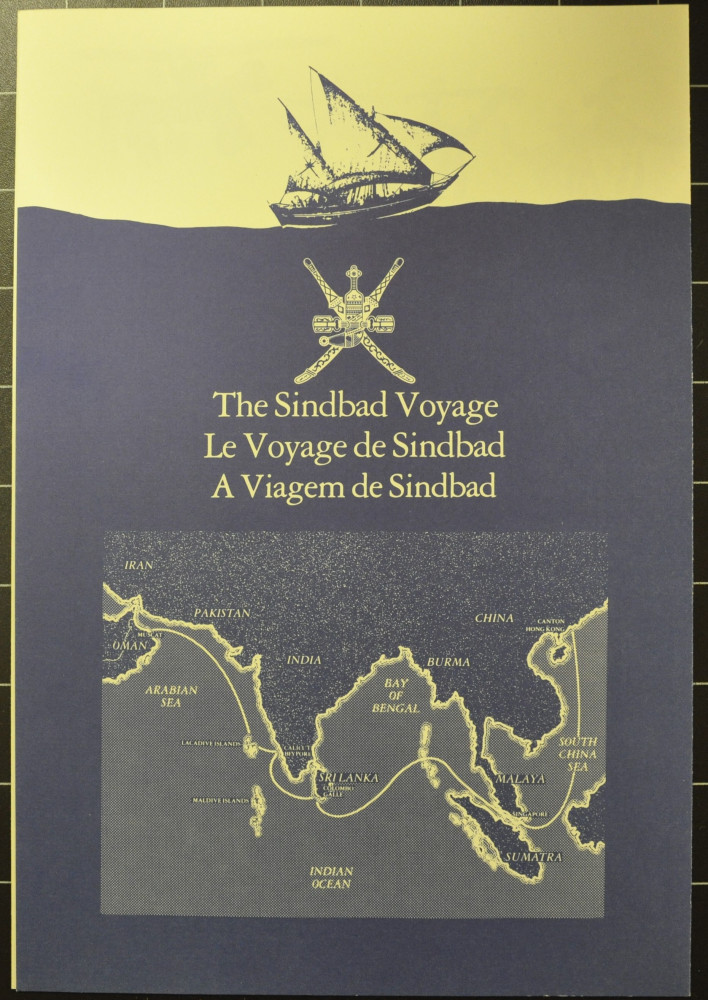 The project was sponsored by the Sultan of Oman, Qaboos bin Said al Said, who passed away earlier this year. Gerald Tibbetts lent his extensive expertise on this subject as a project adviser, and was invited to deliver a paper at the Heritage of Oman Festival Conference on Oman Studies in 1980.

Remarkably, Gerald Tibbetts established a significant scholarly reputation while also working as a professional librarian, spending the second half of his career at Senate House Library. He holds out an example to other librarians (myself included) who aspire to produce work of historical or literary merit while also maintaining a professional career. This dual aspect of Tibbetts’ career seems somewhat familiar to me, as does his long association with Bloomsbury. But the first half of Tibbetts’ professional life was spent much further afield, at universities in Asia and Africa: first in Singapore, then in Sudan and Northern Nigeria.

Indeed, the Tibbetts Collection includes a fascinating article on “The Cataloging of Arabic Books”, published in The Library Quarterly in 1959. Here, Tibbetts related his project to integrate the English and Arabic-language collections at the University of Khartoum:

The librarian and I agreed that a division of the library into two sections on the grounds of language was not justified, any more than a library in England would be justified in separating English and French books, and that this ought to be rectified.

However, the inter-filing of English and Arabic-language publications introduced collection management issues, most notably in cataloguing. These were still the days of card catalogues, before modern, computerized library catalogues made life much easier (for staff and for users); and Tibbetts explains why the different scripts meant there was still a need for separate Arabic and English-language catalogues. He also explains that the Bliss classification scheme used for the English books (a scheme rarely found nowadays), “did not deal with Arabic literature at all except in a general schedule applicable to all languages. It was therefore decided to invent a new system of classification more in accordance with Arab ideas of the division of knowledge.”

Tibbetts goes on to discuss various technical cataloguing problems. The experience of librarians like him in wrestling with these kinds of challenges helped inform the Anglo-American Cataloging Rules. These were first published in 1967 and later iterations of this code still provide the practical basis for modern library catalogues across much of the world.

The Tibbetts Collection also includes a number of maritime maps, charting the waters frequented by Arab sailors in the medieval period, produced in 1966 by Gerald Tibbetts himself. These form the basis for the maps included in his 1971 book, Arab Navigation. Tibbetts explains that the maps were compiled using bearings and star altitudes given by Arab navigational texts. They are a further testament to his passion and devotion to a subject which clearly captured his imagination for many years. 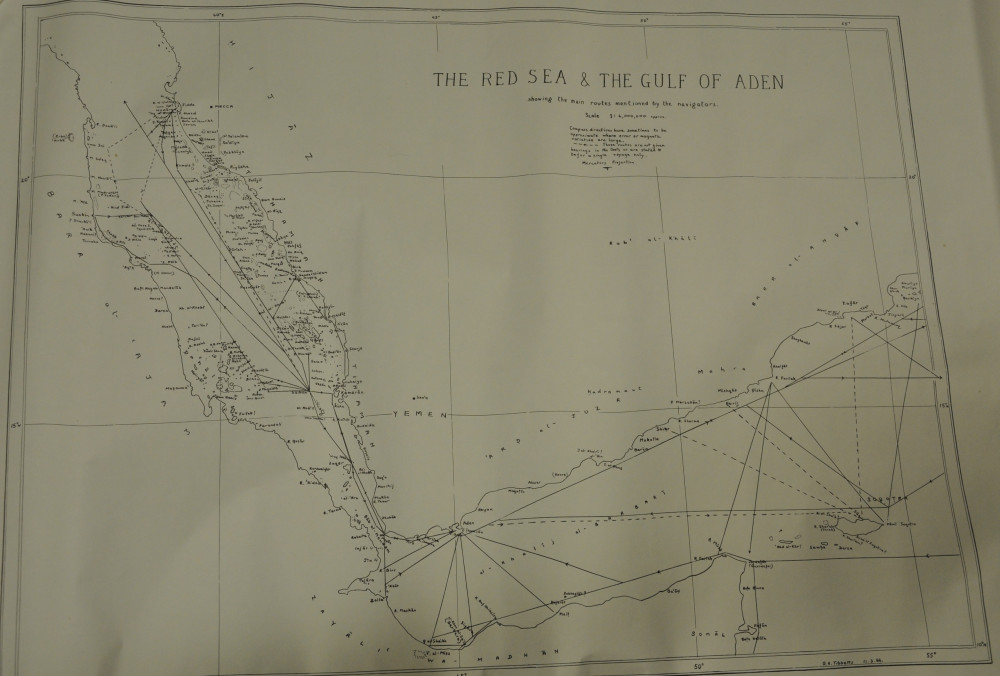 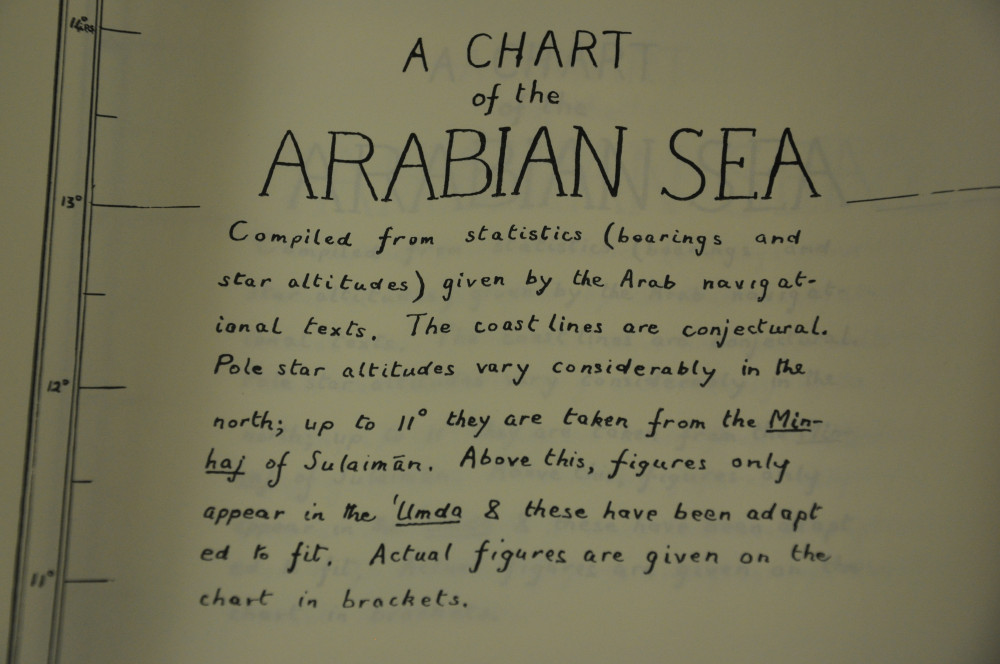 We look forward to making the Tibbetts Collection available once it has been catalogued – stay tuned for further updates.

In other news, the Society continues to be as active as possible under the current restraints. Yesterday, we held an online book launch for a new publication by Dr Roy Fischel (SOAS), Local States in an Imperial World: Identity, Society and Politics in the Early Modern Deccan. Dr Fischel gave an overview of his important study and explained his analytical approach. This was followed by responses from Prof Rosalind O’Hanlon and Prof Richard Eaton, who joined us from Arizona. The discussion provided a fascinating survey of the historiographical and thematic considerations one faces when examining the Deccan in the Mughal period. We were very pleased that the event was extremely well-attended.

Next week, on Tuesday 13 October at 6pm, we will host another online event: a launch of Oliver Watson’s Ceramics of Iran: Islamic Pottery in the Sarikhani Collection. If you would like to attend, please contact Matty Bradley (mb@t-creative.com) by tomorrow (10 October) and the necessary details will be provided. We hope to see you then.