The Mughal Madonna: Representations of the Virgin in Jahangiri-era Architecture 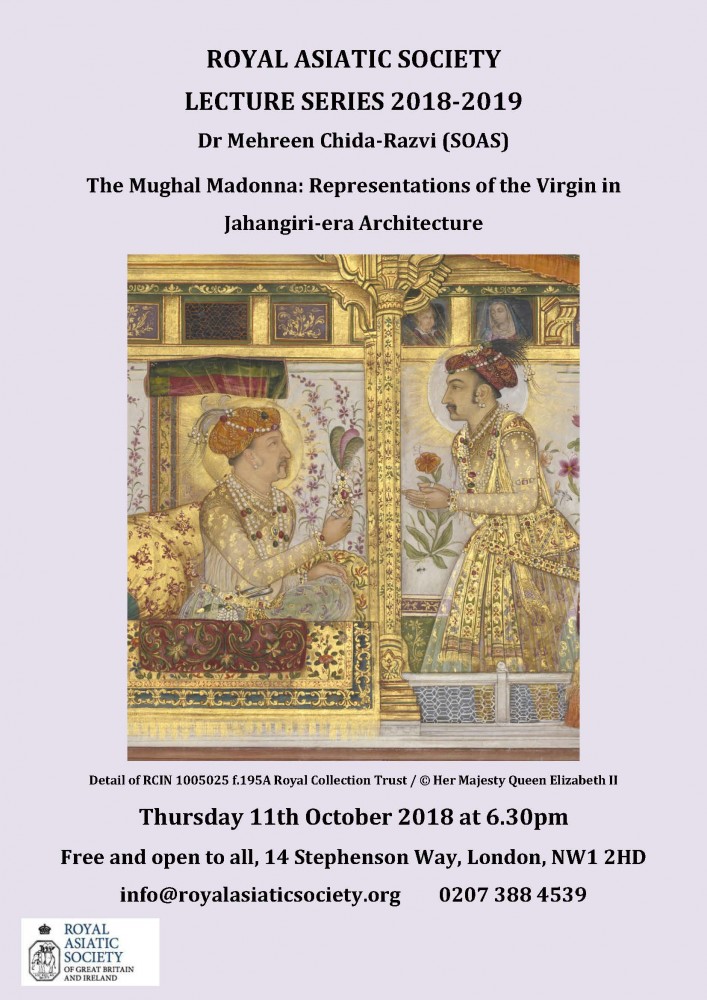 From the arrival of Jesuit missionaries to the court of the Mughal emperor, Akbar (r.1556-1605), Christian imagery was depicted by Mughal artists in works on paper. Both Akbar and his son, Prince Salim, the future emperor Jahangir (r.1605-27), were fascinated by such depictions and scenes from the life of Christ, portraits of Christ and the Virgin Mary, and other scenes based on imagery from religious texts were frequently created by their artists.

Peculiar to Jahangir’s reign, however, are representations of Christian figures as architectural decoration in the form of wall paintings. One of the most frequently depicted of these figures appears to have been the Virgin Mary; she appears as decoration within Jahangir’s royal audience halls, in a pavilion at the Lahore Shahi Qila, was depicted within the gateway to the tomb complex of I‘timad-ud-Daula, Jahangir’s father-in-law, and is supposed to have been represented within the burial chamber of Akbar’s tomb in Sikandra.

In addition to the surviving evidence of such imagery within architecture, textual descriptions and paintings confirm the appearance of the Virgin Mary within Mughal architectural spaces.  Her placement is continuously within palatial or funerary architecture during the period under examination; she does not appear in other structural spaces.

This paper will query the reasons for these depictions of the Virgin, examining the cultural context of Jahangir’s court that led to such religious representations as architectural decoration occurring only during his reign. The political implications of such imagery will also be discussed, tying their creation to not only Jahangir’s patronage but to that of his powerful queen, Nur Jahan. Furthermore, the idea of the Mughal’s symbolically claiming the Virgin via such architectural decoration will be put forth.