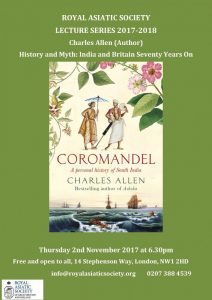 A fascinating exploration of the roots of Indian history by the acclaimed author of Ashoka.

Coromandel was the name given by European traders to India’s south-eastern seaboard, a corruption of the Tamil Cholamandalam, after the temple-building Chola kings who ruled the southern peninsula for centuries prior to the Islamic invasions.

Indian history tends to focus on Northern India, but Coromandel will journey south, exploring the less well-known, often neglected and very different history and identity of the oldest India in the pre-Aryan Dravidian south. Highly acclaimed historian Charles Allen explores the astonishing Buddhist and Jain civilisations that flourished all along India’s eastern seaboard before Hinduism became the established religion.

In Coromandel, Allen continues his investigation into early Indian history, begun in Ashoka. At each point in his journey through the Indian south he meets local historians, gurus, politicians and other colourful personalities, and with their help uncovers some extraordinary stories about the past. This is a traveller’s tale, and as Allen moves through contemporary India, he discovers as much about the present as he does about the past.

Charles Allen is the author of a number of bestselling books about India and the colonial experience elsewhere. He is a traveller, historian and master storyteller.