In this week’s blog, RAS Director Dr Alison Ohta writes about the Epic Iran exhibition. Organised with the Iran Heritage Foundation in association with the Sarikhani Collection, this is currently running at the Victoria and Albert Museum. This explores the history of Iranian art, design and culture and brings together over 300 objects from ancient and contemporary Iran.

It covers 5,000 years of the history of the land we know as Iran, encompassing its peoples, civilisations, cultures and religions. This is Britain’s first major exhibition on Iranian art in 90 years. It brings together some 360 items, many from the V&A’s own collection and other institutions including the New York Metropolitan Museum, the Ashmolean Museum, the Louvre, the Hermitage Museum in St Petersburg, the Fitzwilliam Museum in Cambridge as well as a substantial number of items drawn from the Sarikhani Collection. The exhibition is divided into nine sections and begins in 3200 BC with the earliest known examples of writing in the proto-Elamite script and continues through the Achaemenid period starting in 550 BC when Iran was united for the first time under Cyrus the Great with his capital at Persepolis. The display of the reliefs at Persepolis, cleverly lit with coloured lights, replicates how they once appeared.

The exhibition continues, taking the visitor through the Parthian and Sassanian periods with a separate section devoted to Firdausi’s Shahnamah (Book of Kings), the Iranian national epic, completed in 1010 AD. The exhibition includes several folios from exceptional Shahnamah manuscripts including a detached folio from an illuminated manuscript of the Shahnameh for Shah Tahmasp, Tabriz, 1525-35 from the Sarikhani Collection as well as a folio from the RAS Juki Shahnamah (RAS Ms. 239, 1444, Herat) ‘Rustam slays Isfandiyar’ (f.296a).

The exhibition includes a display of several fine Qur’an manuscripts in the ‘Change of Faith: Advent of Islam’ section, including a rare juz’ (part of a Qur’an) commissioned by the Ilkhan Uljaytu (r.1304-16) in 1306-7 and on loan from the Sarikhani Collection. Meanwhile, a vast array of material from the Safavid and Qajar periods attracts and delights the visitor, including ceramics, metalwork, paintings, textiles, bookbindings, photographs and carpets.

The exhibition concludes with a final section entitled ‘Modern and Contemporary Iran’ which includes the work of artists from the pre and post- revolutionary periods including Parviz Tanavoli (b.1937), Leyly Matine Daftary (1937-2007) and Farhad Moshiri (b.1963).  A video installation of an animation entitled All the White Horses (2016) by Avish Khebrehzadeh completes the exhibition which is accompanied by an excellent catalogue written by the three curators, John Curtis, Tim Stanley and Ina Sarikhani Sandmann.

More information about the exhibition can be found on the V&A website: https://www.vam.ac.uk/exhibitions/epic-iran

We are delighted that a further seventeen Malay manuscripts are now available on the Society’s Digital Library. These manuscripts were digitized with the kind support of the National Archives of Malaysia. They can be accessed in full at https://royalasiaticcollections.org/malayan-manuscripts/

The newly-digitized texts supplement several dozen manuscripts from Malaysia and Indonesia that were already available thanks to previous digitization projects. The visitor statistics of our Digital Library tell us how well-used these manuscripts are by readers across the Malay world, so we are thrilled that more can now be accessed remotely. In a world where global travel continues to be severely disrupted by the pandemic, the importance of online resources is more apparent than ever before.

The majority of the digitized manuscripts are legal texts that were copied in the nineteenth century, and come from the collections of Sir Stamford Raffles and Sir William Edward Maxwell, both of whom served as colonial administrators in South-East Asia.

Please join us at 6:30pm on Tuesday August 10th for the book launch of ‘The Making of Islamic Art: Studies in Honour of Sheila Blair and Jonathan Bloom’. The event will be chaired by Professor Robert Hillenbrand and Professor Carole Hillenbrand in conversation with Professor Bloom and Professor Blair.

This publication explores how Islamic art and architecture were made: their materials and their social, political, economic and religious context. It also looks at Islamic art from the craftsman’s rather than the patron’s viewpoint.

If you would like to attend, please email mb@royalasiaticsociety.org. Attendees will also receive a 35% discount code to purchase the book upon registration. Please note that this event will be taking place virtually over Zoom. 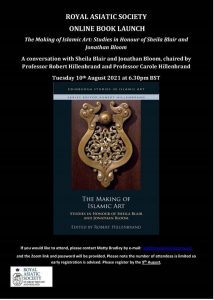