The RAS hosted a couple of events this week. The first, though not a celebration of photographs, was certainly a celebration. Tuesday 10th April marked the launch of Memory, Identity and the Colonial Encounter in India: Essays in Honour of Peter Robb,  his festschrift publication. The evening included a panel discussion between Professor Francis Robinson (RAS & Royal Holloway), Professor Ananya Jahanara Kabir (King’s College, London) and Professor Edward Simpson (SOAS South Asia Institute), preceded by an introduction by the publication’s editors Dr Ezra Rashkow (Montclair, US) and Dr Sanjukta Ghosh (SOAS). After the discussion, the editors held a conversation with Professor Robb. And no celebration would be complete without a celebration cake!

The second event of the week was the next in our lecture series. We were delighted to welcome Dr Omniya Abd al-Barr from the Victoria & Albert Museum to talk upon her current project working with the photographic archive of K.A.C. Creswell. Creswell was a pioneer in the methodical recording of Islamic architecture, and much of his documentation included photographs, mainly of buildings in Egypt but also from other surrounding countries. His work is now hosted in several locations, and part of Dr Abd al-Barr’s project is not only to sort through and organise the collections at the V&A, but also try to find a platform to bring the different scattered collections together. Creswell was connected with the Royal Asiatic Society – indeed it transpires that his first public lecture was at the Society in 1914. He was also a winner of the Society’s Triennial Gold Medal in 1959. (More about the Gold Medal will be coming up shortly in a blog post!)

It was exciting to hear of this photographic collection and how it is being ordered and made available to the public. Work also continues with our own photographic collections. We are pleased to have, for the third year,  a placement student from Sussex University MA in History of Art and Curation. Laura Morris-Kingham is currently working with our photographs to package and catalogue previously unsorted photographs. Here she writes about one of the collections with which she has been working: 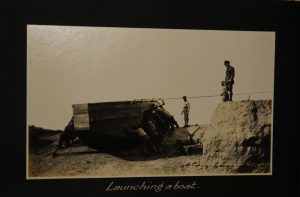 The latest addition to Royal Asiatic Society’s catalogue is a fascinating collection of photograph albums belonging Colonel Sir John Fisher Turner (1881-1958). Otherwise known as the ‘Dictator of Dummies’, Turner was the director of the British decoy and deception schemes during the Second World War. This secret department of the Air Ministry, (as seen on Country File a couple of weeks ago!) created dummy airfields and aircrafts, decoy towns with simulated bomb hits, and decoy coastal gun sites to fool the German Luftwaffe bombers. The department, known only by the inconspicuous name “Colonel Turner’s Department”, was amongst the war’s best-kept secrets! 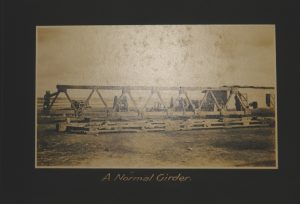 Before this remarkable achievement, Turner had a long association with the Royal Air Force as a civil engineer in Asia. Commissioned in the Royal Engineers in 1900, Turner went on to become the Chief Engineer at the RAF in India in 1928-31. Fortunately for us, Turner was a keen photographer, carefully capturing his trips to Asia with the Royal Engineers from the youthful age of nineteen. These albums, dating between 1899-1920, provide a thorough document of Turner’s travels to India and Iraq and display the wealth of experience he had. An album of note is ‘New Mosul Bridge’, remarkable for its condition and content alike. The album provides a detailed record of the erection of the bridge in Mosul, Iraq that commenced on September 21st 1920, designed by Turner himself. While giving evidence of Turner’s precision, the album also provides a useful example of how colonial, military and engineering histories intersect in an Iraqi context. 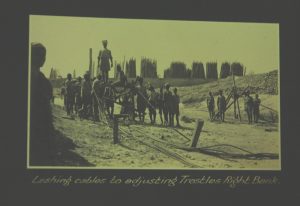 Though the albums contain photographs of the constructions Turner made and designed, they also demonstrate his curiosity and delight for both the built and natural environment of Asia. Turner constantly captured the railways, bridges and roads he stumbled upon, as well as slightly older constructions – the ancient cities of Babylon, Ctesiphon and the Tower of Babel. Beautiful and striking landscape photographs depict snowy mountain peaks, valleys, waterfalls, and streams, mostly in northern parts of India, now part of present day Pakistan. 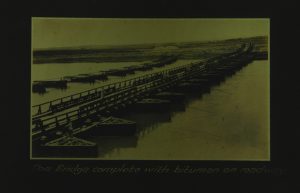 The in-depth knowledge Turner possessed from a young age evidently contributed to his masterminding of the decoy sites, and made him worthy of his ‘Dictator of Dummies’ title. The Royal Asiatic Society is privileged to possess a fascinating insight not only into the work and life of a figure that made such an important and exciting contribution to the Second World War, but an insight into India and Iraq at the beginning of the twentieth century.

This material is now catalogued as Photo.60 and can be found on our online Library catalogue. The  blog’s photos just feature one of the albums – the construction of the NewMosel Bridge. Do come into the Reading Room to view this and the other albums of this fascinating collection.

Not only do we have these photograph albums, we also have a small amount of archival material belonging to John Turner. These papers consist of 2 typewritten leather-bound diaries entitled, “Diary, 6 Months in Turkestan, 1911” containing a detailed diary of Turner’s travels through Turkestan. The diary provides descriptions of the routes, the things he saw and people he encountered, the activities he undertook, and the necessary equipment and supplies that he needed. The catalogue for this material is now available on Archives Hub.

Next week sees more events at the RAS. On Tuesday 17th April, we are delighted to host the book launch for Professor Francis Robinson’s new publication: Jamal Mian: The Life of Maulana Jamaluddin Abdul Wahab of Farangi Mahall, 1919–2012 .  This book relates the life of Jamal Mian Farangi Mahalli, a highly respected scion of Lucknow’s scholarly culture and a major leader of the Pakistan Movement. Based on the archives left by Jamal Mian, it explores his life as a member of Farangi Mahall, South Asia’s leading family of Islamic learning from Lucknow. Professor Robinson covers the colourful life of a dynamic personality–from his education in the Dars-i Nizami and the spiritual traditions of his family to his rise to the Muslim League High Command, and his involvement in the campaign for Pakistan.

On Thursday 19th April,  as part of our lecture series, John Falconer (British Library)  will lecture on: ‘A Glorious Galaxy of Monuments.’ Photography and Archaeology in India in the 19th Century. Both events will take place at 6.30pm and we hope to welcome you to one of them.