We are delighted to announce that the project to conserve one of the Society’s Burmese manuscripts, and its rare woven braid (sazigyo), was recently completed. The conservation of these precious objects was entirely thanks to donations received from the Society’s Fellows and supporters, and we are very grateful to everyone who contributed.

Created in 1792, this manuscript is a Burmese Kammavācā, which refers to a collection of passages from the Tipitaka (of the Theravada Buddhist canon) relating to religious ordination and the rituals of monastic life. This manuscript comprises 11 dark red lacquered, gilded, and decorated plates, contained within two light wooden covers, and wrapped in a multi-coloured cotton cloth woven with bamboo slats. While the plates themselves are in good condition, their coloured textile container needed close attention. Much of the fabric was fraying, and needed to be stabilized; the threads were loose and unravelling; and one of the bamboo slats was broken. There was also a lot of age-old dirt which needed to be removed. 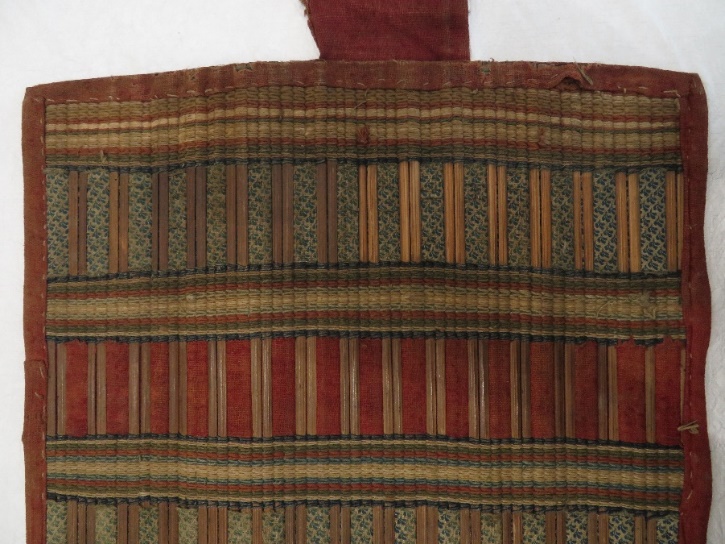 We therefore needed a professional conservator to carefully clean the manuscript, secure the loose threads in place, support the broken bamboo, and make a bespoke conservation box to protect the manuscript in the future. In the end, a colour-matched nylon conservation net was used to encase fragmented edges of the wrapping, and other small areas of loss on the woven strips. The repaired manuscript is now contained in a conservation-grade box, made with non-acidic materials and lined with Plastazote, which is ideal for long-term storage.

The sazigyo was also in need of urgent attention. A very early example of this rare art form, it became discoloured over time and suffered the effects of staining and dirt. Potentially more serious were the several abrasions and disruption to the weave, which meant it was in danger of unravelling.  As well as cleaning the sazigyo, these areas of damage were secured with nylon netting and stitched in place. The braid is now stored on a custom-made roller, and kept in the bespoke box with the manuscript.

The success of this project means that these important objects will be available for decades to come. They are valuable not only for their utility to historical research: they are an intrinsic part of our cultural heritage, and as part of the Society’s collection are a physical, aesthetic embodiment of the way that British people have been inspired by Burmese culture.

Having been cleaned and repaired, the Kammavaca’s wrapping and braid look bright and renewed: an elegant visual representation of the ongoing collective endeavour to preserve, and sympathetically renew, cultural heritage, which is at the heart of conservation and curatorship. So much of our ability to look after the treasures bequeathed to us by previous generations relies on the selflessness and generosity of unsung individuals. We hope that the success of even a small-scale project like this can serve to inspire people about the potential impact of charitable giving.

We plan to hold an event later this year to celebrate the success of this conservation project, and will soon write to all our donors with further details.

In other news, the Society will host a lecture this coming Tuesday, 30 July, when Dr Sarah Tiffin will speak on “Raffles and the Course of Empire: Decoding Ruin Imagery in The History of Java”. We hope you will be able to join us.