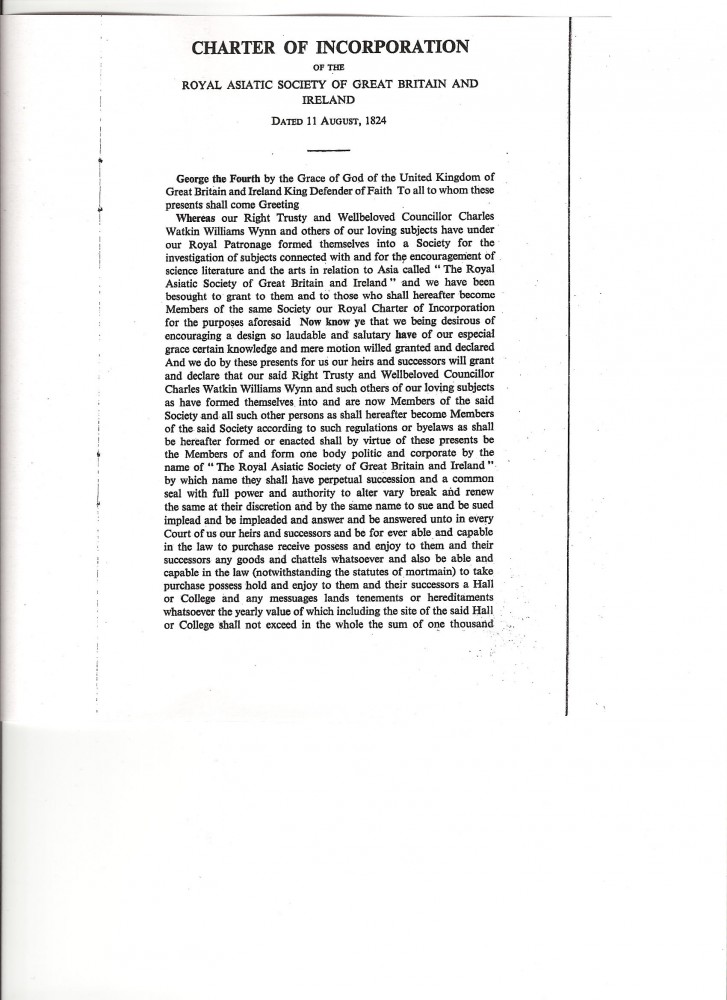 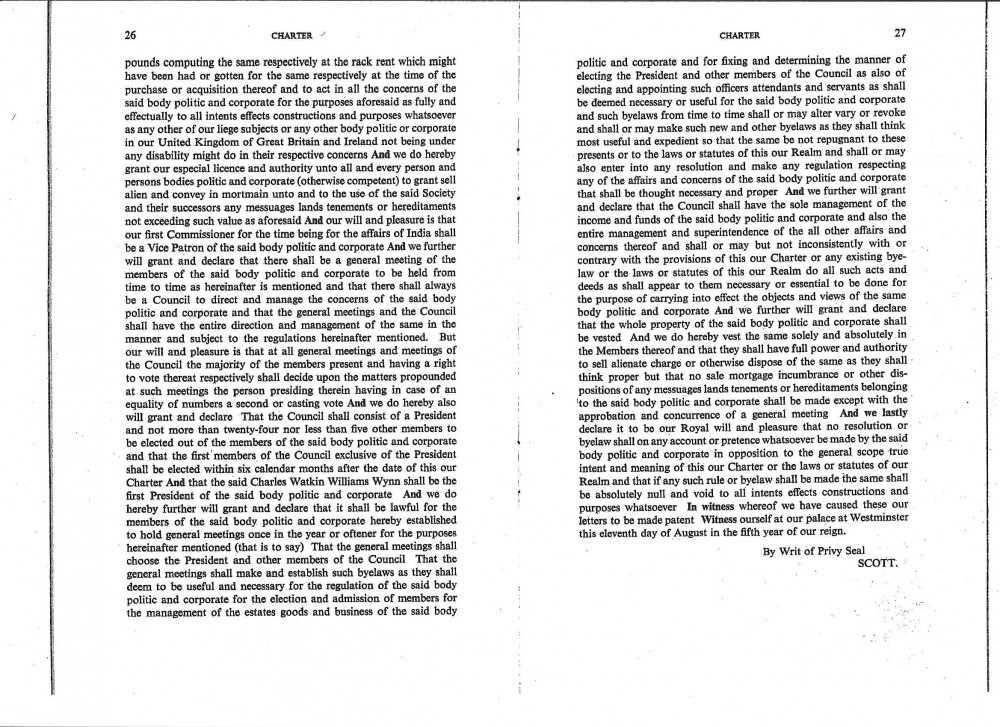 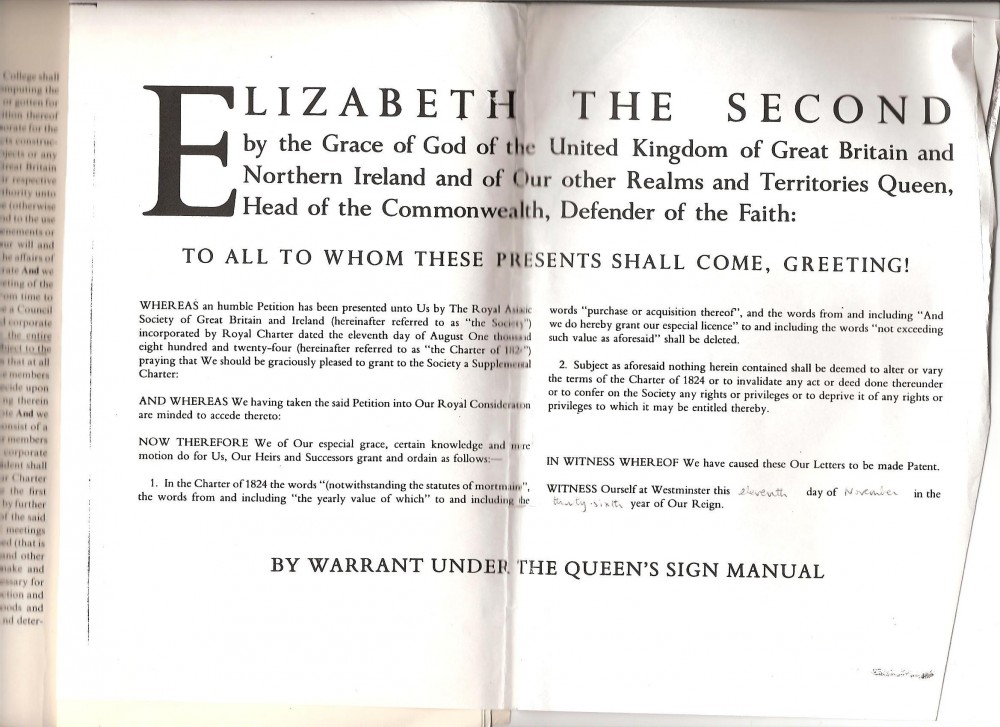 BYELAWS of the Royal Asiatic Society of Great Britain and Ireland

(b) In all cases prescribed, reserved, or agreed to be determined by ballot, when a ballot results in an equality of votes and it is necessary to make an elimination of persons in respect of whom such equality exists, there shall be a second ballot confined to the names of such persons, and if the votes shall again be equal the Chairman shall have a second or casting vote.

IV.    MEETINGS OF THE COUNCIL

V.    OFFICERS OF THE SOCIETY

VI.    MEETINGS OF THE SOCIETY

The course of the business shall be as follows:

IX.    PUBLICATIONS OF THE SOCIETY

(b) The Council shall provide for the safe custody of the Seal, which shall only be used by the authority of the Council or of a committee authorised by the Council in that behalf; every instrument to which the seal shall be affixed shall be signed by the President, or the Honorary Treasurer or by some other person appointed by the Council for that purpose. The persons in whose presence the Seal is affixed shall also sign the book in which a record of sealings shall be kept.

I.    ELECTION, ADMISSION AND RESIGNATION OF MEMBERS

(a) shall show the names of all persons then being members of the Council, and the particular position on the Council held by each of them;
(b) shall indicate those members of the Council who are not eligible for re-election at the next Anniversary General Meeting, and shall make clear the reason for each of the indications so made;
(c) shall show the impending vacancies on the Council;
(d) shall present the recommendations by members of Council with names of the proposer and seconder and an abbreviated curriculum vitae of each candidate from which Council shall draw up a list of those proposed to fill the offices on it for the ensuing year.

VI.    RESPONSIBILITIES OF THE COMMITTEES

The Committee shall make recommendations to Council on spending and financial policy. It shall oversee the preparation of the budget and accounts, and receive reports from the auditors, and recommend all these for approval by Council. It shall agree budgets under different heads, including for the Library and other committees, and keep income and expenditure under review during the year.

The Committee shall be responsible for financial matters related to tenancy and letting agreements; conduct a regular review of staff salaries and conditions; and make an annual recommendation to Council on the levels of membership contributions. It shall undertake periodic reviews of service agreements as required under the Byelaws, and recommend providers to the Council.

The Committee shall from time to time propose a statement of investment objectives for the Council’s approval. It shall receive an annual report on the investment portfolio, its value, income and management, and make recommendations to Council. The Committee shall propose prudent limits on the amount of income to be drawn from investments, including from the restricted endowments for prizes or other purposes, and agree an annual target income in cash and as a percentage of the value of the portfolio. It shall normally draw only from cash income, drawing on the capital (at current valuations) only in exceptional circumstances and with the prior approval of the Council.

Money available for prizes and other spending from designated funds shall be calculated in any year by applying the percentage target for that year to the current balance in the fund. No share of the management fee shall be allocated to the designated funds, and they shall be maintained in cash terms in the financial records. However, Council may adjust the money value of a designated fund if it sees fit, on the advice of Finance & Investments Committee, taking account of any increase or decrease in the capital value of the portfolio.

The Committee shall advise on any financial implications of proposals under consideration and shall approve any new spending commitments and any expenditure above approved limits. Such matters shall be referred to it by the Director, committees or others responsible. Such referrals shall include the financial implications of any contract negotiated with third parties, and any investment from the Society’s funds.

The Treasurer or in the Treasurer’s absence the President may act on behalf of the Committee, subject to a report to Committee members by circulation or at the next meeting.

The Committee shall, from time to time, propose to the Council a publishing strategy and detailed arrangements to implement it.

The Committee shall report to the Council at least annually on the work of the Journal and on the publication of any other books or materials, in print or electronic form, to have been solicited or put under contract since the previous year’s report.

The Committee shall recommend to the Council the terms of appointment of any Publications Officer/Consultant charged with developing and  implementing the publishing programme.

The committee shall, with the approval of the Council, delegate specific responsibilities as follows:

The Journal of the Royal Asiatic Society

The Editor shall make a report, at least annually, to the Committee about the progress of the Journal.

The Committee shall recommend for appointment by the Council membership of an Editorial Board to take academic responsibility for the publishing of monographs bearing the Society’s imprimatur. Minutes or records of any meetings of the Editorial Board, or with any publisher of monographs and related academic publications, shall be reported forthwith to the Publications Committee.

The Chair or Secretary of the Editorial Board shall make a report, at least annually, to the Committee about monographs and related academic publications, which shall be reported forthwith to the Publications Committee.