Book Launch and Signing – Moin Mir (Author) in conversation with Dr. Rosie Llewellyn-Jones MBE – The Prince Who Beat the Empire: How an Indian Ruler took on the might of the East India Company

“THE PRINCE WHO BEAT THE EMPIRE. How an Indian ruler took on the might of the East India Company” published by Amberely Publishing June 2018.

An acclaimed history of Empire and resistance. An incredible story of the fall of Surat, Mughal India’s greatest port to the English East India Company and the moving story of the rebel prince of Surat who beat the world’s most powerful colonising corporation. The ships of the English East India Company first docked at India’s shores in Surat in the early 17th century. In time, through astute politics and military power, the Company became masters of this great port. But the Company came not with the intention of building Indian maritime trade, but with the single-minded goal of destroying its trading prowess. By 1800 the port was completely annexed, through a treaty that gave protection to the future generations of the local Nawab rulers. By then the English East India Company was at the forefront of Empire Expansion. It was the Empire’s most dreaded canon of annexation and growth. But, as elsewhere in India, the Company violated its promises. It stopped the Nawab family’s income, usurping its palaces, estates, jewellery and possessions. This left the infant granddaughters of the last Nawab on the brink of destitution.

But in an unprecedented counterattack, the father of the two girls stood to defy the Empire and expose its corruption overseas to the British at home. Travelling to London, and backed by Victoria and Albert he would shatter the East India Company’s reputation. His campaign for justice would call for the end of British rule in Hindustan. In a riveting legal battle, the end game of this incredible saga was played out in a nail biting finish in the House of Commons where England rose  for the first time in favour of an Indian and against the machinations of it’s own Empire. Not only did the Prince win back the family’s possessions for his infant daughters but also found true love in Victorian England.

Praise for “THE PRINCE WHO BEAT THE EMPIRE”:

Shashi Tharoor, India’s former Foreign Minister and current Member of Parliament from Kerela, India: “Moin Mir weaves a fascinating story of triumph and fortitude, reanimating in delightful prose a forgotten chapter of history. Painstakingly crafted and richly researched. This is the remarkable story of of a quest for justice against the might of Empire and the travails of an Indian Prince who stood up for which was his by right”

Jessica Douglas-Home: “A gripping untold history which Moin Mir has written with great knowledge and flair. Meer Jafar Ali Khan achieved what no other Indian Prince was able to-The political defeat of the East India Company in the House of Commons. The British political establishment convinced by his passionate fight for justice rose for the first time in favour of an Indian and against its own Empire’s colonising corporation. This is a stirring historical book”

Dominic West, Actor: “A moving story and a deeply sympathetic hero: courageous, gentle and magnificently stylish who took on and defeated a monolithic tyrant. A story of an Indian Prince who won over Victorian England with charm and decency and went onto find love in 19th century England. This is a wonderful book”

Moin Mir was born in India and lives in London. He has worked on several projects translating India’s finest 19th century Urdu and Persian poets works in English. He has researched the history of Sufism and cultural revivalism in India extensively. He is a member of the Nawab family of Surat, a direct male descendant of Meer Jafar Ali Khan and next in line to succeed as the Darbar of Kamandiyah in Gujarat, India. His interest also includes the restoration of the family’s manor house in India. He is currently working on his next book set in 18th century India, Turkey and Transylvania. 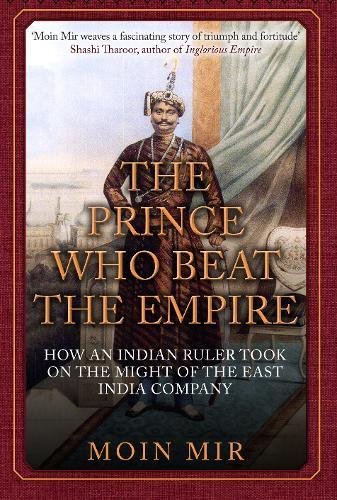