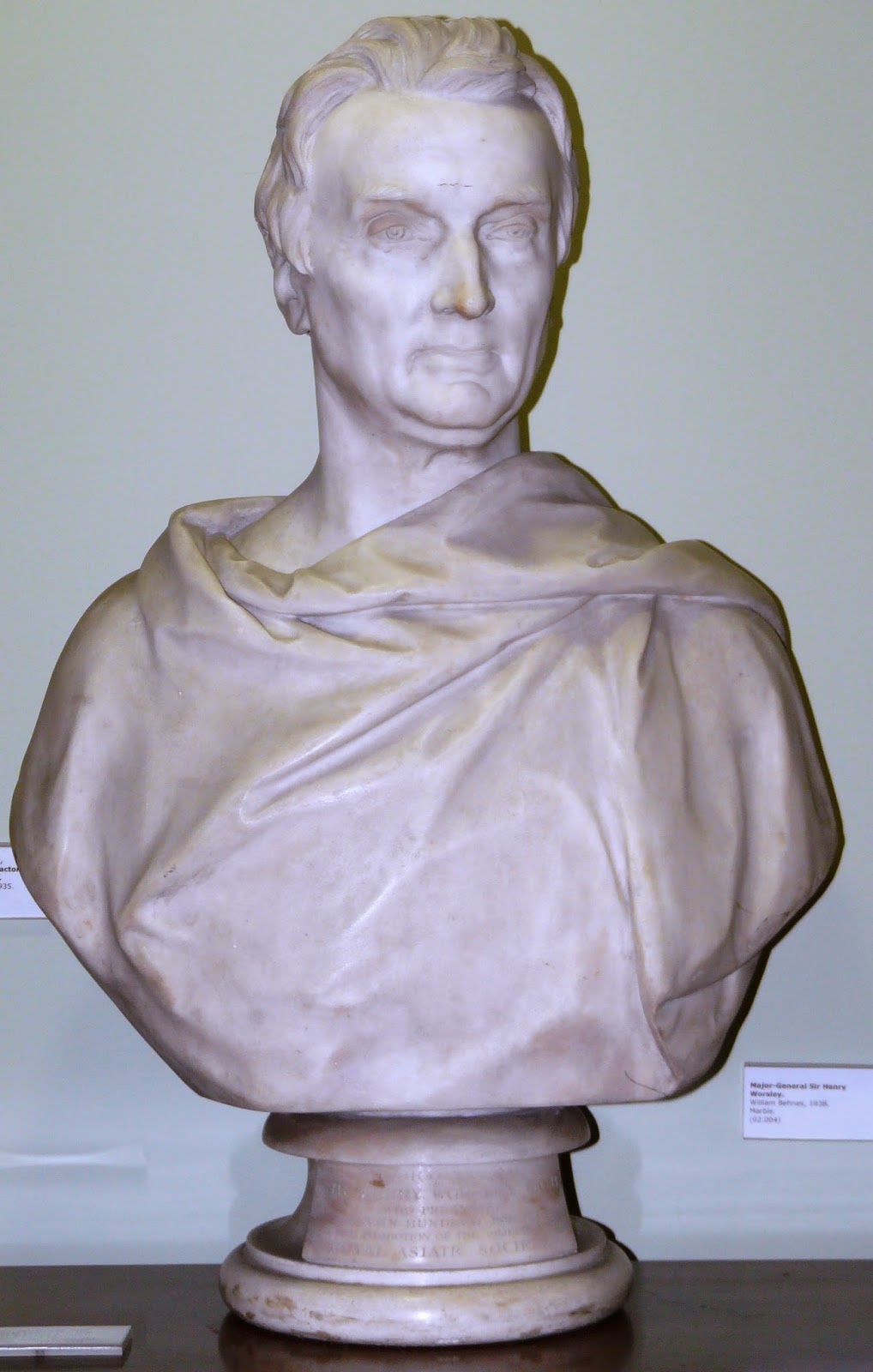 This is the bust of Major-General Sir Henry Worsley. It sits, at present, in the Meeting Room of the RAS with other notables such as Henry Thomas Colebrooke and George Henry Noehden. It was commissioned after Worsley generously donated £1000 to the RAS in 1837.

Here is the entry in Raymond Head’s Catalogue of Paintings, Drawings, Engravings & Busts: The Collection of the Royal Asiatic Society which explains the circumstance of the commissioning of the bust and something about its sculptor, William Behnes: 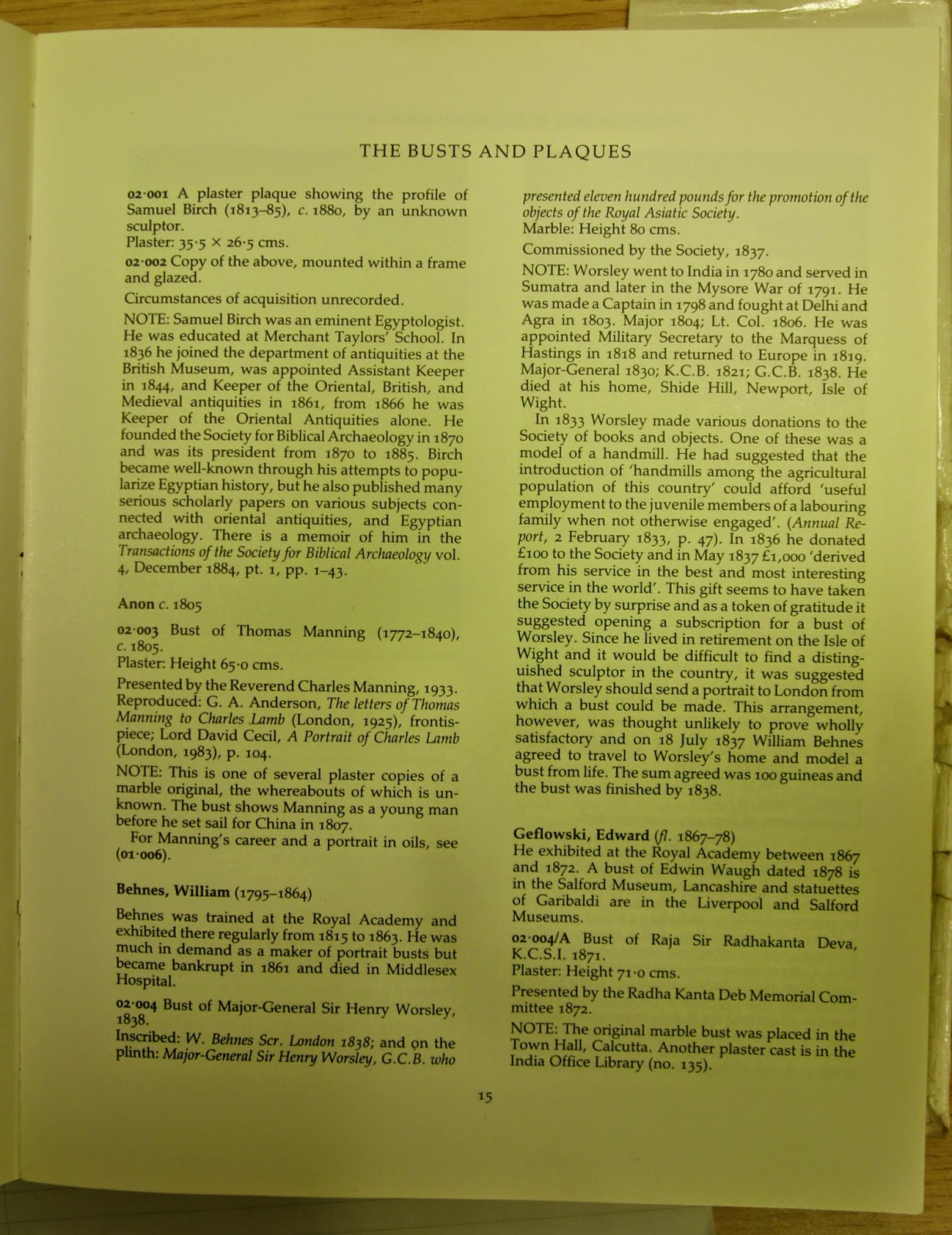 The entry is written in a matter-of-fact way explaining that William Behnes (1795-1864) was trained at the Royal Academy and was much in demand as a maker of portrait busts. However he became bankrupt in 1861 and died in Middlesex Hospital. It also explains how Behnes agreed to travel to Worsley’s home on the Isle of Wight in order to undertake the sculpture. And that his payment was agreed at 100 guineas to be raised by subscription.

But archives allow us to find out a little bit more… In my sorting of the early archives of the RAS I have found two letters from William Behnes. 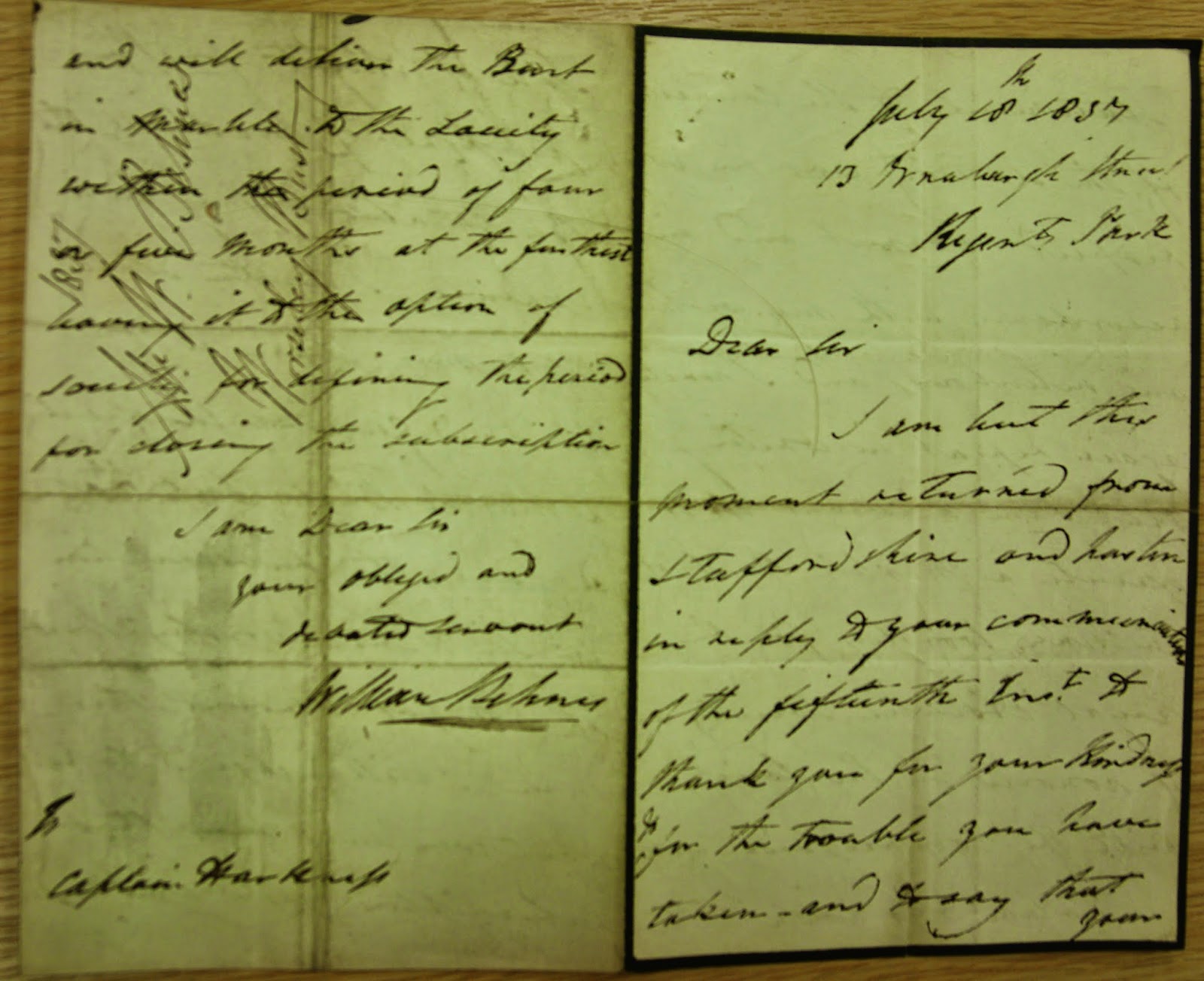 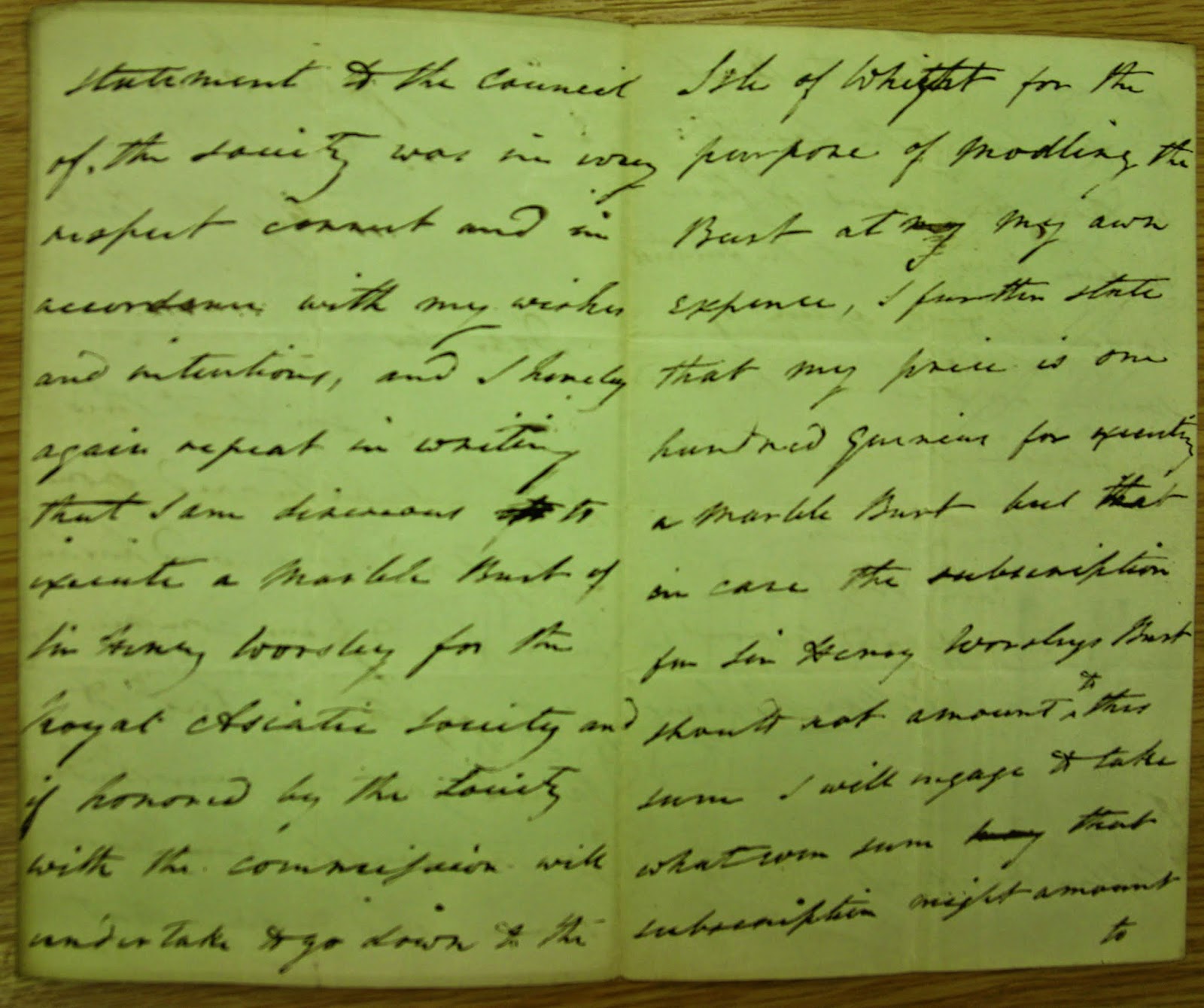 This is the first letter, dated July 18th 1837, in which Behnes accepts the commission of the RAS and agrees to go to the Isle of Wight at his own expense. It also states that “my price is one hundred guineas for executing a marble bust but that in case the subscription for Sir Henry Worsley Bust should not amount to that sum I will engage to take whatever sum that subscription might amount to”. Behnes also undertakes to deliver the bust to the Society within four to five months. 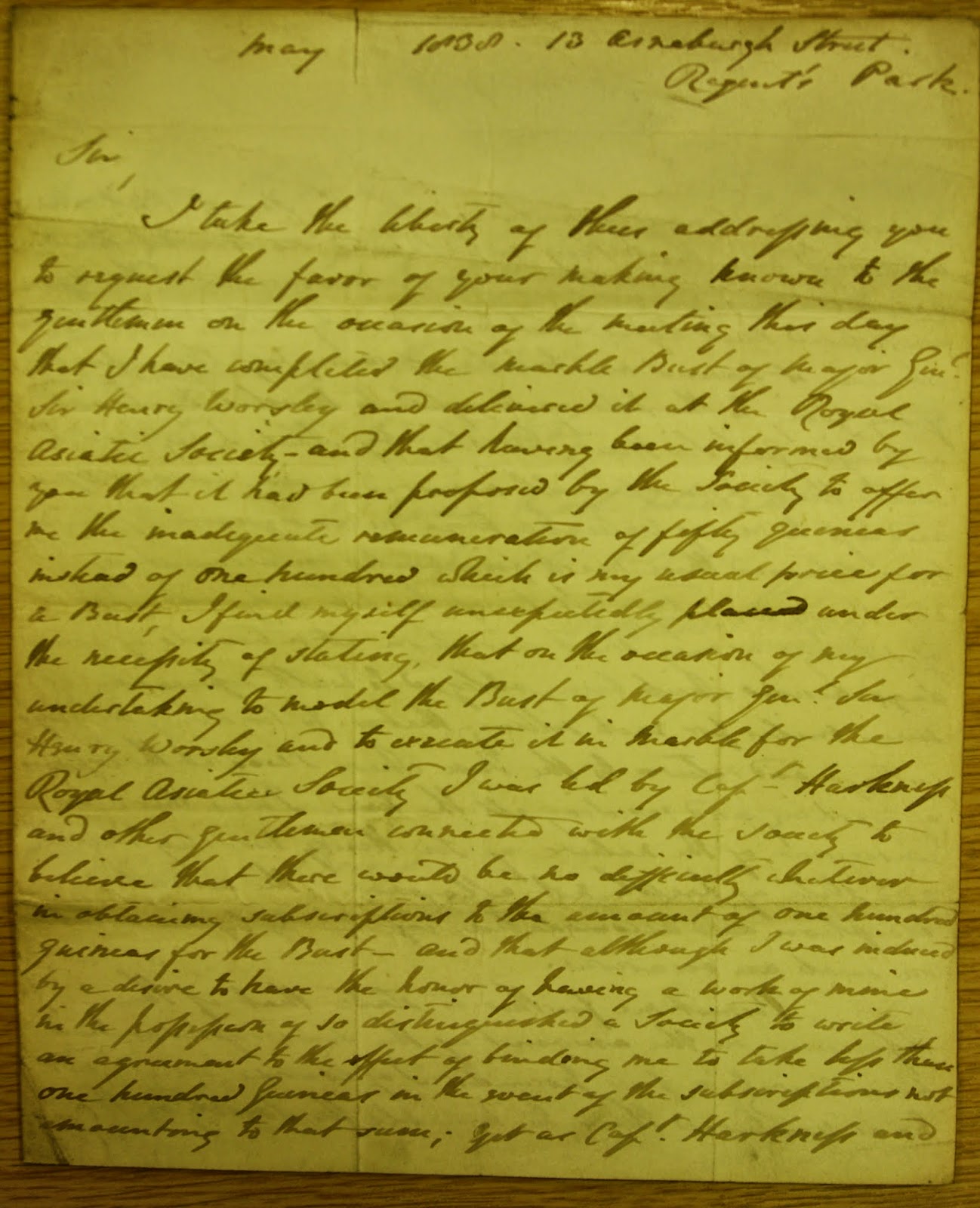 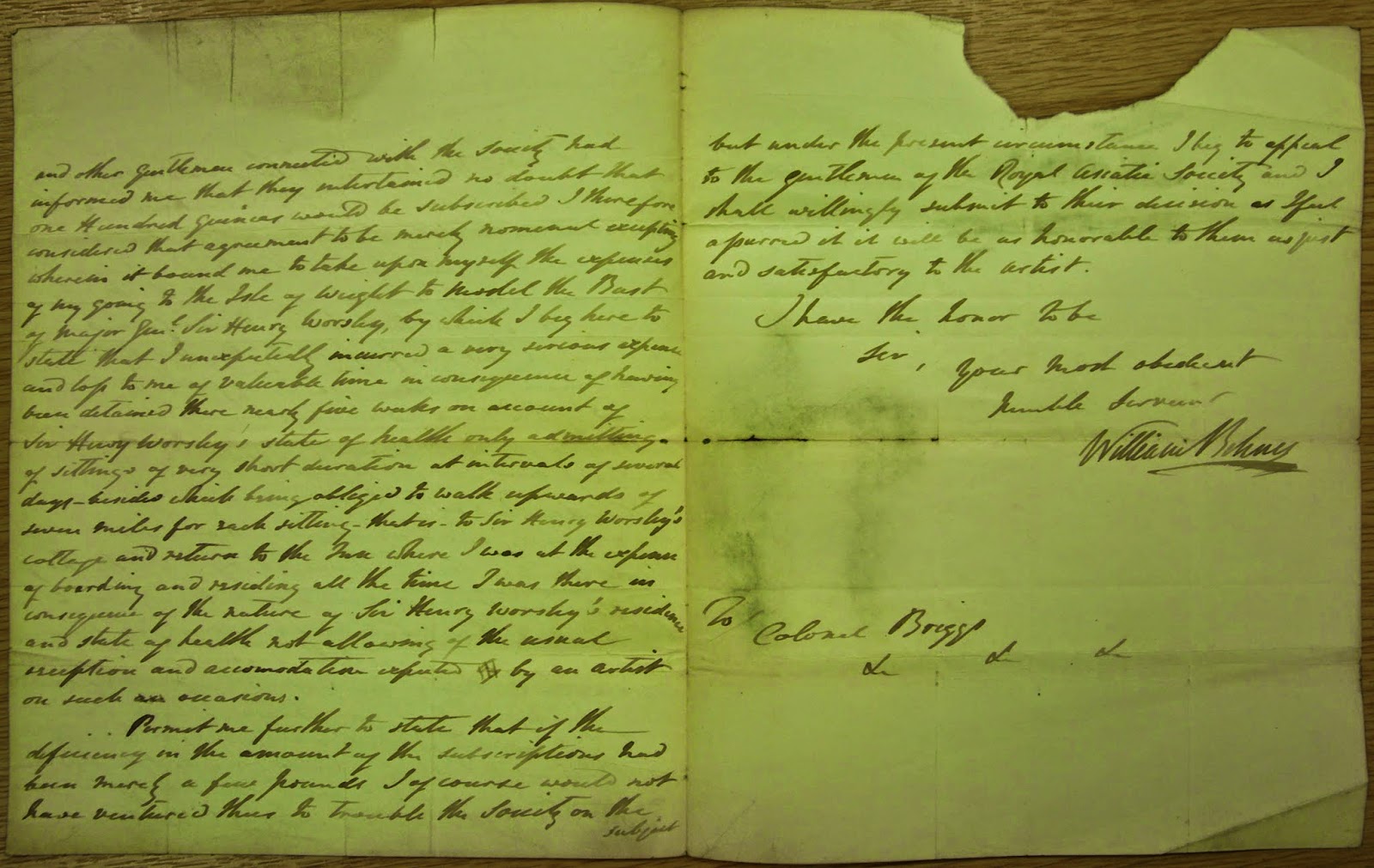 Here we find that Behnes, very politely, is complaining to the RAS. Captain Harkness, the then Secretary of the RAS, had supposedly given Behnes the impression that there would be no difficulty in raising the 100 guineas. But Behnes writes “I take the liberty of thus addressing you to request the favor of your making known to the gentleman on the occasion of the meeting this day that I have completed the marble bust of Major Genl. Sir Henry Worsley and delivered it at the Royal Asiatic Society – and that having been informed by you that it had been proposed by the Society to offer me the inadequate remuneration of fifty guineas…”

Behnes further goes on to express how he had not only provided for his own travel to the Isle of Wight but also for his own accommodation as “the nature of Sir Henry Worsley’s residence and state of health not allowing of the usual reception and accommodation expected by an artist on such an occasion”. Behnes knew that he had agreed to undertake the work for the amount that the subscription raised but because of size of the deficiency was appealing for further payment.

The story ends at this point (for now). Neither the Minutes of Council or the Minutes of General Meetings for May 1838 mention Behnes’ letter and request. Perhaps as more of the archives are sorted, then the story may unfold. Here’s hoping that the RAS were not one of the reasons for Behnes subsequent bankruptcy!