On Thursday 14th May, the Royal Asiatic Society is delighted to welcome Dr. Eugene Rogan (University of Oxford) who will lecture on The Dardenelles Campaign viewed from both sides of the trenches. This lecture will be informed by Dr. Rogan’s recently published book: The Fall of the Ottomans: The Great War in the Middle East, 1914-1920. 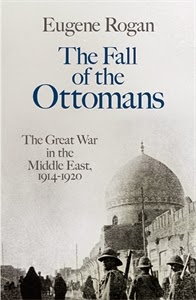 The Ottoman entry into the Great War in November 1914 turned Europe’s conflict into a world war.  The Ottoman Front extended across three continents where soldiers from Australia and New Zealand, India, North Africa and Europe fought pitched battles across the full four years of the war.  The war led to the fall of the Ottoman Empire and the emergence of the modern states of the Middle East, each of which felt the impact of the Great War through conscription, wartime ravages of famine and disease, and the major battles of the Ottoman Front – in Turkey, Iran, Iraq, Yemen, Saudi Arabia, Egypt, Israel and the Palestinian Territories, Syria and Lebanon.
In his book, Eugene Rogan recounts the story of the Ottoman Front through the voices of the men who served there on both sides of the trenches.  Drawing on a wealth of diaries and memoirs left by Turkish and Arab soldiers and civilians, as well as the private papers of British and French combatants, The Fall of the Ottomans traces the social, military and diplomatic history of one of the most fascinating and least understood fronts of the Great War.

We look forward to Dr Rogan’s lecture which will follow the Society’s Anniversary General Meeting. The AGM will be held at 5.30pm with the lecture at 6pm, and the evening will finish with a Drinks Reception when light refreshments will be served.