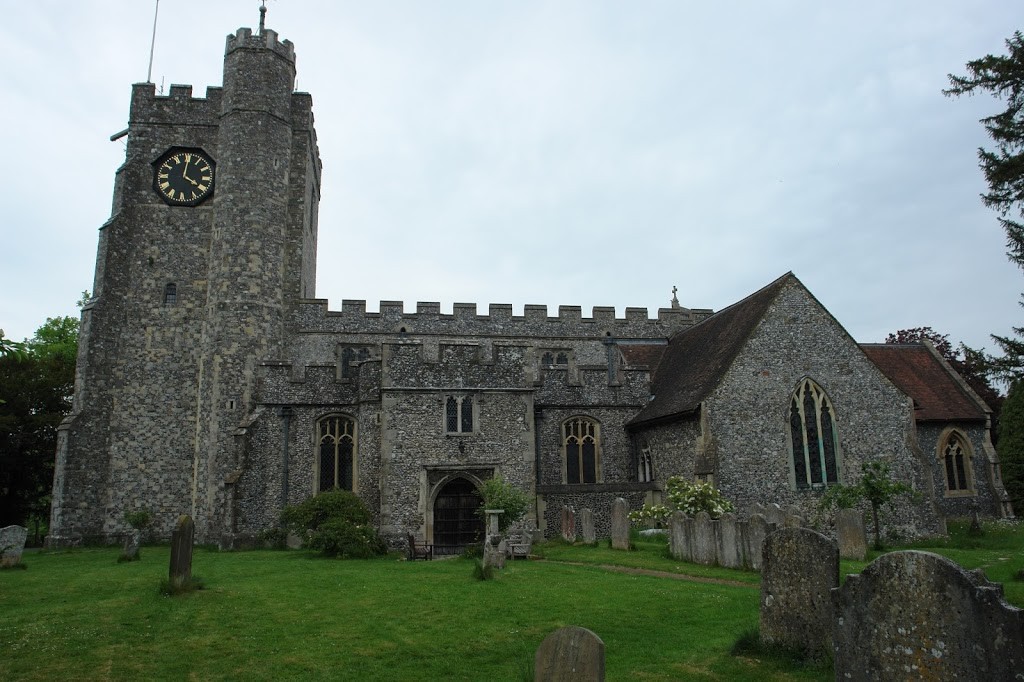 As I have been delving into the Collections and beginning to organise the archives, my desire to learn more about the Society’s ‘founding fathers’ has grown. I decided to read Rosanne and Ludo Rocher’s book, The Making of Western Indology: Henry Thomas Colebrooke and the East India Company to discover more about the man cited as the instigating force for the Royal Asiatic Society in London.

The book is an excellent read; one I would heartily recommend to those of you interested in learning more about Colebrooke. I soon realised that the Royal Asiatic Society was only a very small part of this man’s achievements  – he was a key figure in India throughout his time there.

I was not very far into the book when I read that Colebrooke was buried at Chilham in the family mausoleum – his grandfather, James, having once owned the castle there. Chilham is a pretty East Kent village between Ashford and Canterbury and therefore near to my home. So Bank Holiday Sunday, a day that was mild with just a threat of rain in the air, I went to explore… And my explorations turned into a poem, a draft of which is below. I chose a fairly formal form as Colebrooke was a man of detail and formality, and lived when poetry was of a more formal ilk. However I didn’t stick strictly to the form in order to give a taste of myself discovering (or that was my hope anyway). Here it is:

At Chilham
A Whitsun weekend with insipid sun
suggests itself as fit for exploration –
a quintessential village market square
flanked by cottages of tile and timber,
a gated castle, still privately owned,
and grassed churchyard, in which I seek the bones
of Henry Thomas Colebrooke, Sanskrit scholar,
judge of India, Society founder.
I wander among headstones reading names
but centuries of weathering has erased
so many of them, I begin to fear
I’ve little hope locating Colebrooke here.
But in the shadow of the flint church wall
I come upon a large horizontal
lichened, stone slab with just two words engraved –
COLEBROOKE VAULT. Is this all that remains?
I spot the church door open, step within,
intent on seeking further revelation.
The church displays a wealth of monuments:
the Hardy children play, and Mary Kemp’s
is blessed with Muses seated round a column,
Lady Palmer’s entwines flowers and solemn
epitaph: Fairer than most women,
wiser than most men. Then at last, in dim
northeast corner, two plaques of Colebrooke names
read Sacred to the Memory of James,
wife Mary, their numerous descendants.
Bestowed by Edward Colebrooke, Baronet,
these tablets also tell of their demise:
how Act of Parliament authorised,
in restoration (1863)
for Gothic splendour cherished by Hardy,
their mausoleum’s loss, their bones exhumed,
the Colebrooke clan rehoused in outside tomb.
So the mausoleum no longer exists but evidence of the Colebrookes is still there. I took my camera so I include some photographic, as well as poetic, evidence:
If you want to embark on a similar exploration, I can thoroughly recommend ending with a cream tea at Shelly’s (you can just see the sign in the photo above). The scones are delicious.