We are pleased to announce that three manuscripts belonging to the RAS have been safely rehoused. Cambridge University Library has issued the following statement:

Three manuscripts have been placed in the University Library on long-term deposit by the Royal Asiatic Society. Originally acquired by the Society in the 1800s and among their greatest treasures, they had, until recently, been kept in the British Library. Foremost among them is the breathtaking Shahnamah (RAS MS 239) commissioned for the Timurid prince Muhammad Juki in Herat in 1445 who died before it was completed. It contains over 30 richly illuminated miniatures and is one of the finest examples of the Persian Book of Kings to exist. 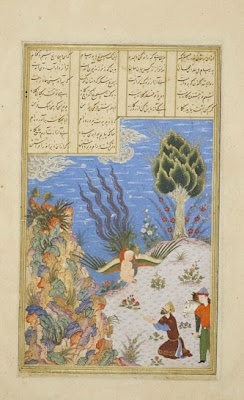 The other two works are from the 16th century, but no less beautiful: the Kitab-i Mathnawiyyat-i Zafar Khan (RAS MS 310), a stunning but unfinished autograph copy of Ahsanallah b. Abu ’l-Hasan’s poetry dated 1663, and the exquisite Gulistan (‘Rose Garden’) of the Persian poet Sa’di (RAS MS 258), which is known for its colophon portrait depicting the eminent scribe Muhammad Husayn al-Kashmiri, known as ZarrinQalam (Golden Pen) and the artist Manohar as a youth. The text pages are filled with exquisite paintings of colourful birds and animals.  Representing the highest levels of artistic achievement, these three treasures will remain on long-term loan in Cambridge University Library, and scholars requiring access to them should apply through the Manuscripts Reading Room.
The RAS wish to express their gratitude to Cambridge University Library in agreeing to care for these precious manuscripts and ensuring their continuing accessibility to researchers.
Share: