For the last two weeks, I have been cataloguing the R.A.S Japanese book collection. I have come across a number of interesting titles such as “Japan as number one: lessons for America” by Ezra F. Vogel. In addition, I’ve laid eyes on some fascinating illustrations within “Chiushingura; or, the loyal league: a Japanese romance” by Izumo Takeda. Published in 1880, romance stories were accompanied by drawings that were first engraved on wood and printed on Japanese paper by Japanese artists.

However, the most exciting discovery came from a dusty old pamphlet box. Upon opening it, a beautiful purple hardcover book embellished with flowers and birds (possibly a phoenix or crane) appeared in immaculate condition. The title was engraved on the cover in gold-letter writing with the kanji, 禁城の熹光: 満州國皇帝陛下御生立記 (Kinjō no kikō : Manshūkoku kōtei heika on oitachiki). This discovery turned out to be the Japanese translation of Sir Reginald Fleming Johnston’s “Twilight in the Forbidden City”, published in Tokyo in Shōwa 10 [1935] by Kantō Gen’yōsha Shuppanbu.
Reginald Johnston was a Scottish academic and scholar of the Chinese Qing dynasty. A mentor and diplomatic advisor to Puyi, the last Emperor of China, “Twilight in the Forbidden City” is regarded as Johnston’s memoir about his life in Beijing and interactions with Puyi. The book was used as a source to create the film “The Last Emperor” in 1987. However, the written text also provides an insight into the Qing court political structure and the Imperial Household.
Researching more about this book, an accompanying letter dated 10 April 1935 was found affixed to the inside cover page. Addressed to the then secretary and librarian, Colonel D.M.F. Hoysted, it reads:
“Dear Col. Hoysted,
A Japanese translation of my book “Twilight in the Forbidden City” was recently produced, with a view to private circulation among high officials in Japan & Manchuria & for presentation to the two Emperors. It is embellished with [….] [inscription] & prefaces by the Manchuria Emperor and the prime minister & others, & I understand the book is being distributed among the principal schools & the colleges of Japan by order of the Japanese government.
I was asked to give a list of the people to whom I would like complimentary copies to be sent, and I included the R.A.S in my list. I hope it will duly turn up & will be accepted for the library.
Yours sincere[l]y,
Reginald F. Johnston.” 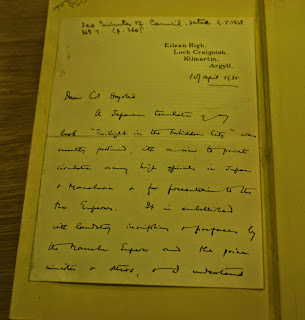 Investigating the hand-written note at the top of the letter, reveals that the book was “presented to the society by Haruyoshi Tsuchiya Esq., Shibu-ku, Tokyo” (Minutes of Council, dated 9.5.1935, no.7, p.360). It is worth noting that this individual could have been the original translator of this edition, as a printed type-written letter addressed to a “Tsuchia” is found within the publication. Sent by R. F. Johnston, a snippet of the letter reads:
“I thank you most warmly for the kind things you say about Twilight in the Forbidden City, and I am very glad and proud to know you have found it worth reading and worthy of a Japanese translation. You are quite at liberty to prepare a translation, and I shall be greatly honoured if you will do so.”
It is difficult to verify that Tsuchiya is the translator of this Kantō Gen’yōsha Shuppanbu edition from the colophon. However, this edition is a highly significant example of a publication that preserves the history of British-Sino interactions in the Japanese language. This is because, with regard to a later 1989 edition, Watanabe Shoichi criticises the translator’s morals in his book “Nihon o iyashimeru nihongirai no nihonjin: ima osorerubeki wa jipanofobia”. This, he said, was on the basis that the translator omitted many chapters that are included in the Kanto edition, and that parts of history that could be seen as controversial to the Japanese government were mistranslated. Considering that this 1935 Japanese translation was not for sale and distributed to key individuals, it could therefore be said to retain the original intellectual thoughts of Reginald F. Johnston.
——–
This blog post was contributed by Tavian Hunter, MA Library and Information Studies student at UCL. She has just completed a two-week internship with the R.A.S, cataloguing the Japanese book collection. Approximately 200 records have been updated and created.
Share: