As I am beginning to reach the end of unpacking boxes (though it’s one of those things that there always seems to be another one to do), I am now contemplating how to arrange all the material in a systematic way that, hopefully, in some ways portrays some kind of original (or at least logical) order. I am going to start by retrieving all the early material about founding the Society. We have the Minute Book of the meetings that planned the start of the Society. The book is still in excellent condition and is beautifully handwritten. 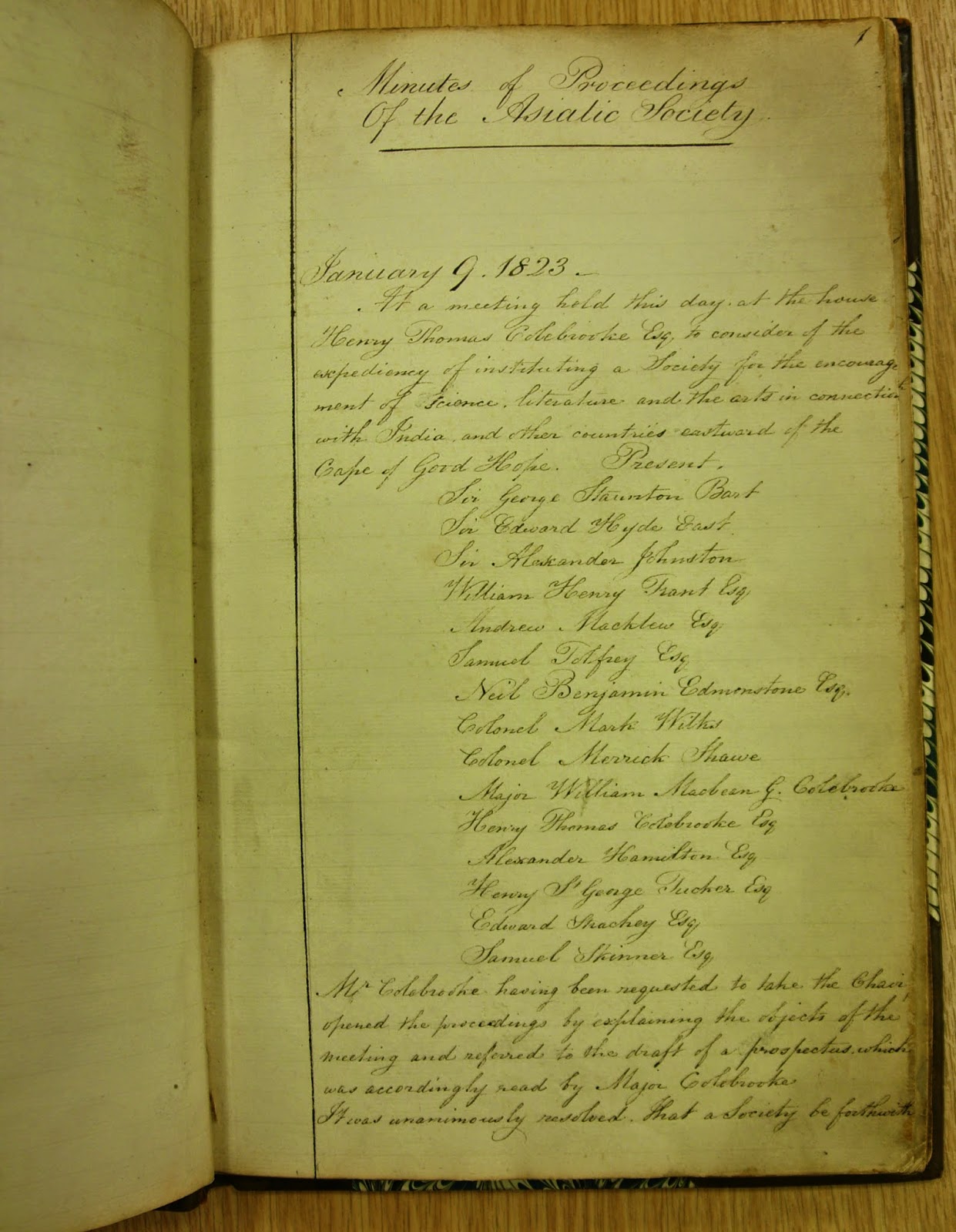 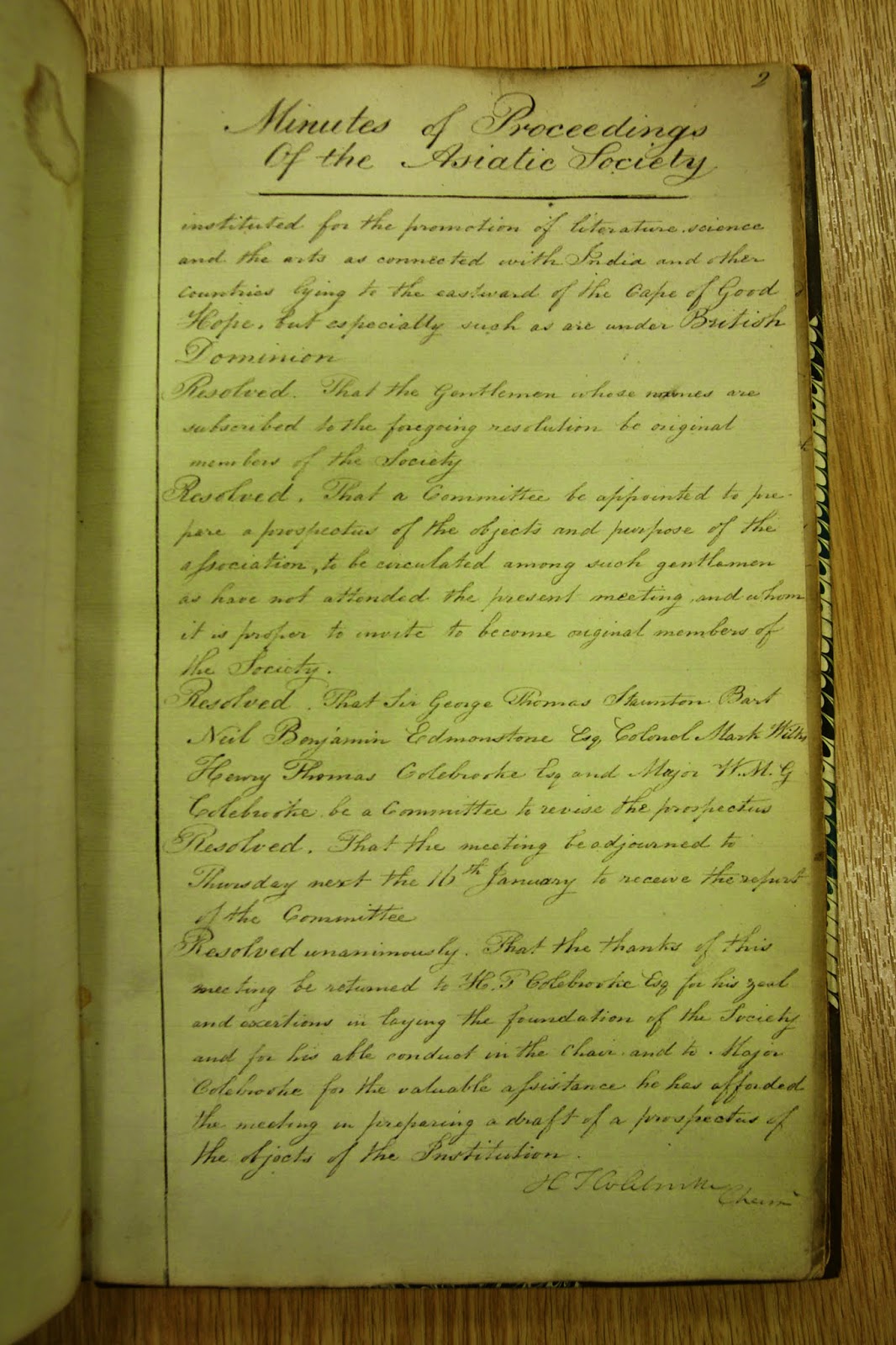 We also have a copy of a photograph of the Thatched House Tavern, at which the inaugural meeting of the Society took place. 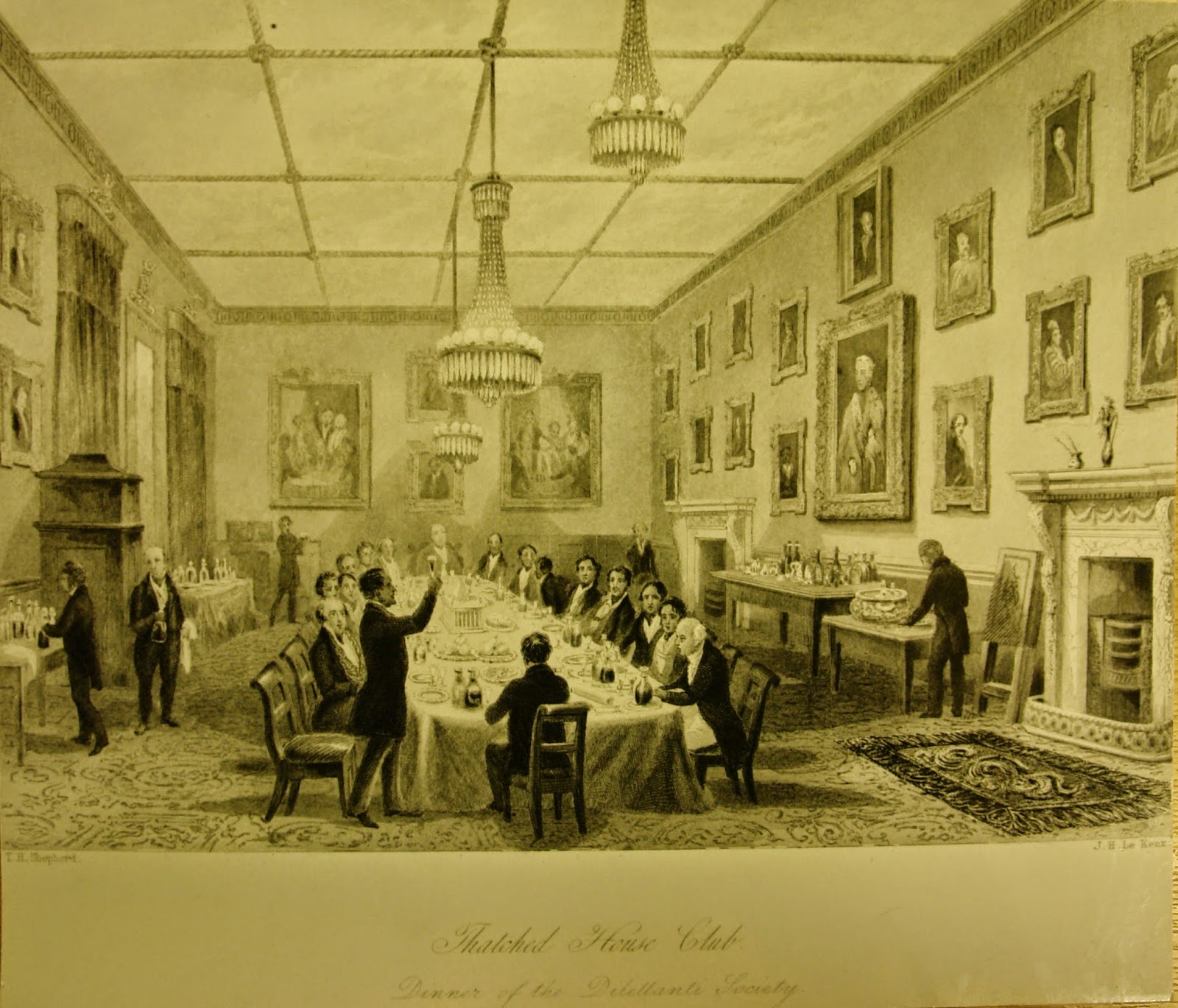 This picture presents a fairly typical archival dilemma in arranging of material. Firstly it is not of the Asiatic Society but of a Dinner of the Dilettante Society, and though it may be representative of the era, the article itself is a copy made at a later date. Therefore do I put it in with the archives about the beginnings of the Society, as people who are researching about the founding of the Society may be interested to see it, or do I try to discover when the copy was made for the Society, presumably by somebody putting on an exhibition, and add it to material of that date? Which would you choose to do? In the end, either is possible (though one may be more preferable) and as long as I make the description in the catalogue adequate, there should be no problem finding it by future researchers.

The archive also holds material about early finances. We have the original Accounts Book dating from 1823 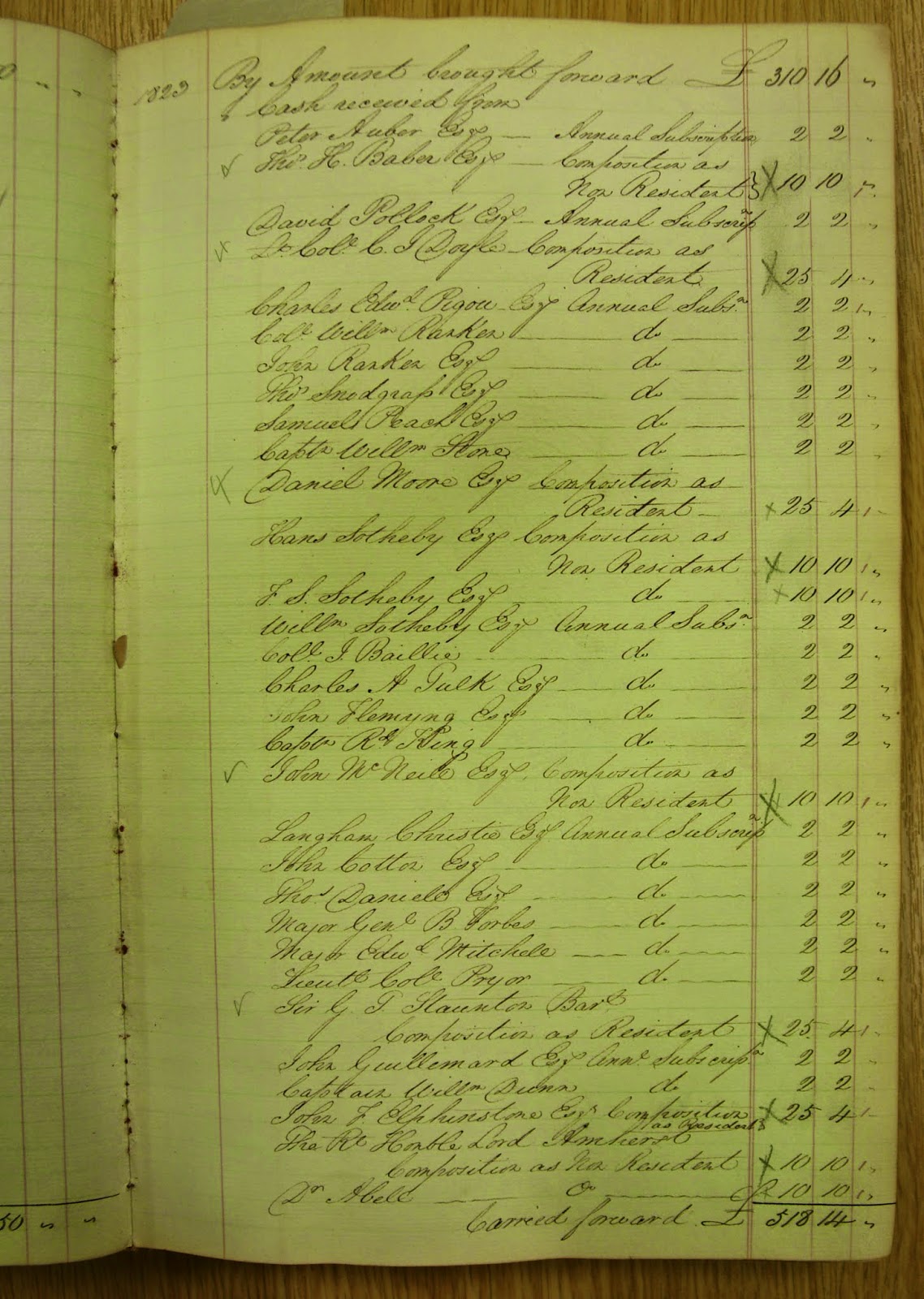 At present, this book is being investigated by Peter Collin, one of the current Council members, who is discovering interesting discrepancies between the subscription lists and the original members lists.

In another box there is a sheet of paper listing voluntary contributions in 1823. I have yet to check whether these are also recorded in the accounts book: 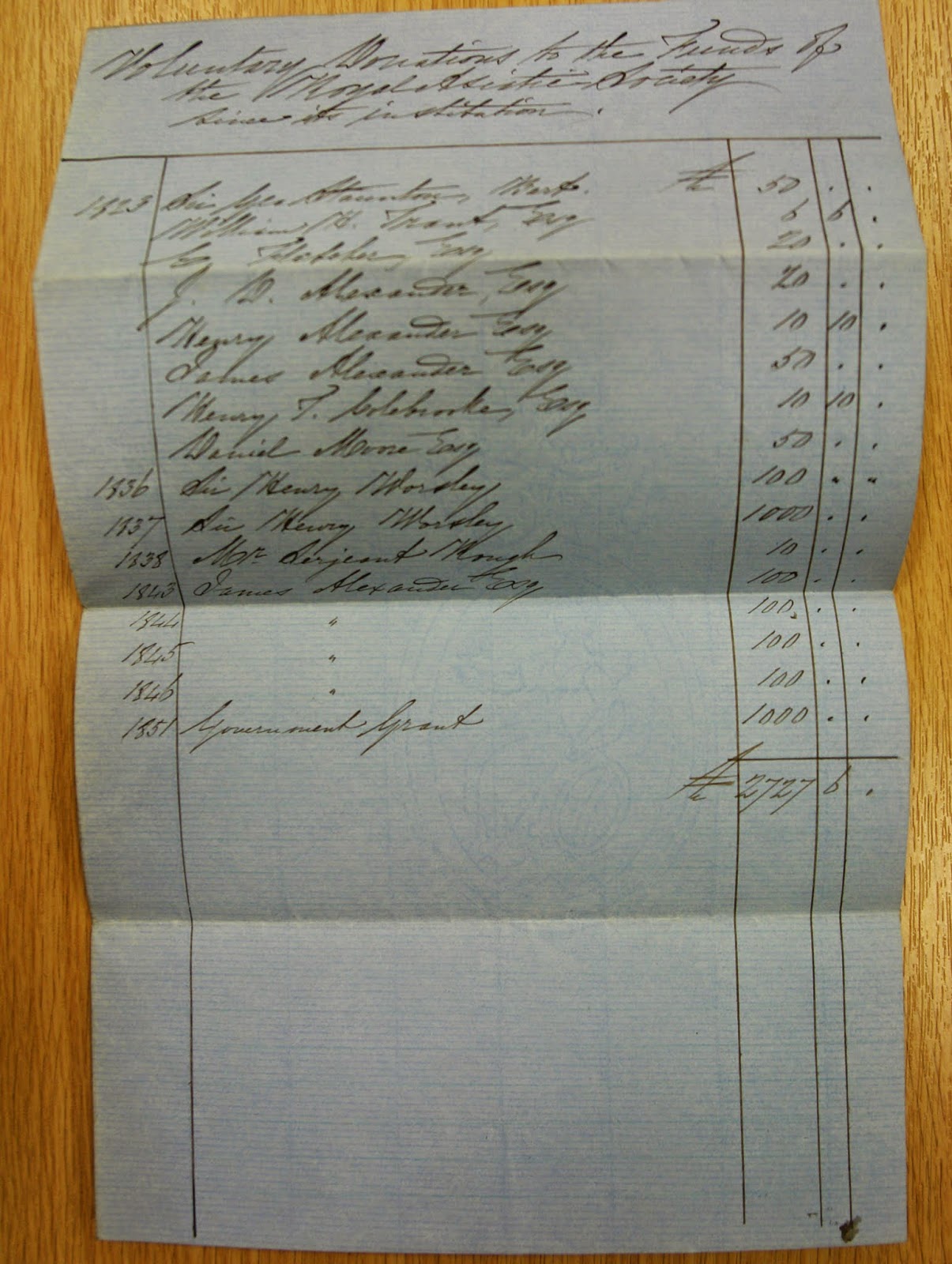 Another early fiscal delight are these Certificates of Annuities in the names of James Alexander and Henry Thomas Colebrooke: 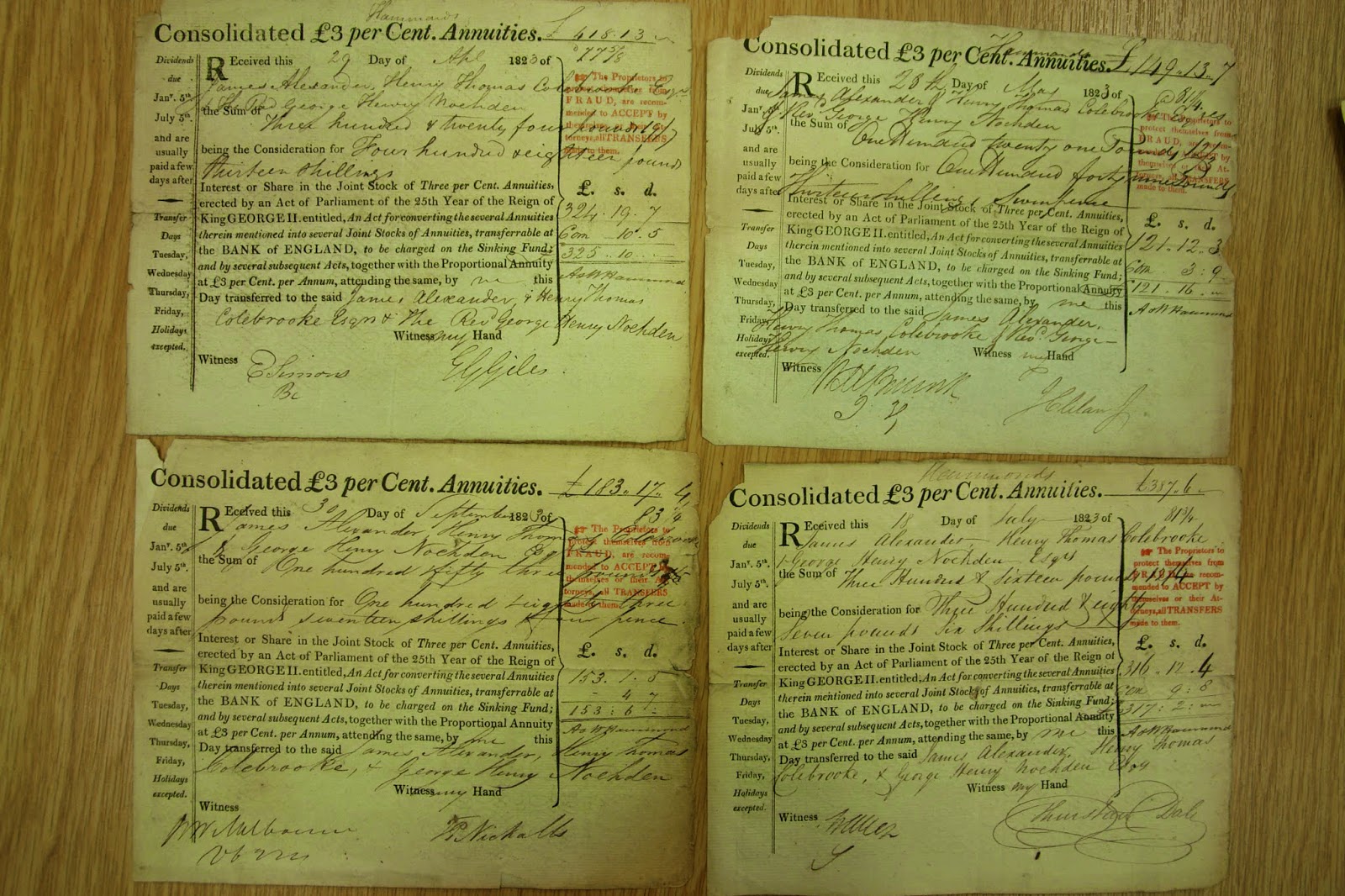 We also have early correspondence regarding donations to the Society. The letter below details a donation of a “new mineral found in the Mysore Country near Belloor and not I believe hitherto mentioned in any work on mineralogy”. This letter was written by Major General Ogg on February 5th, 1825. 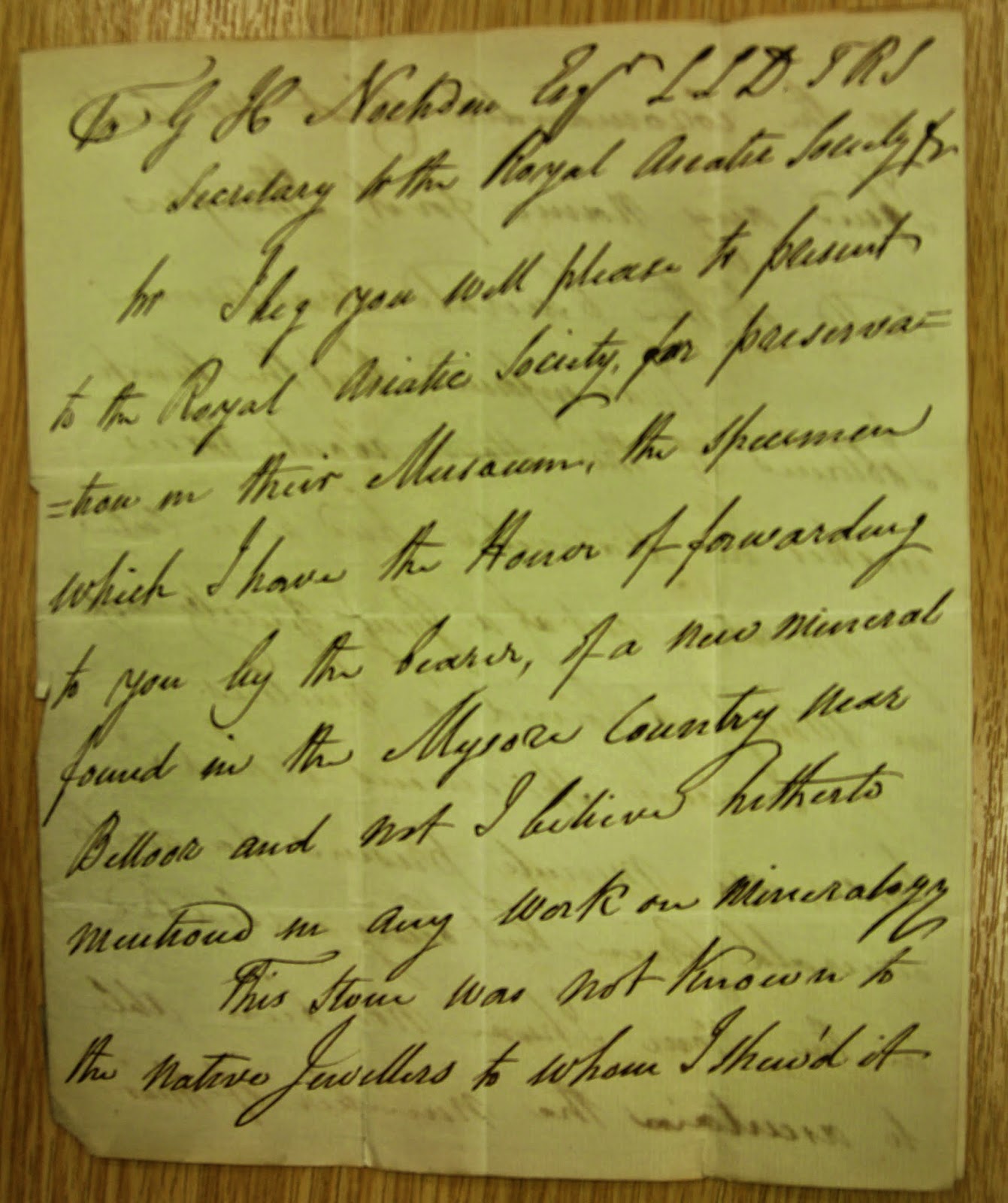 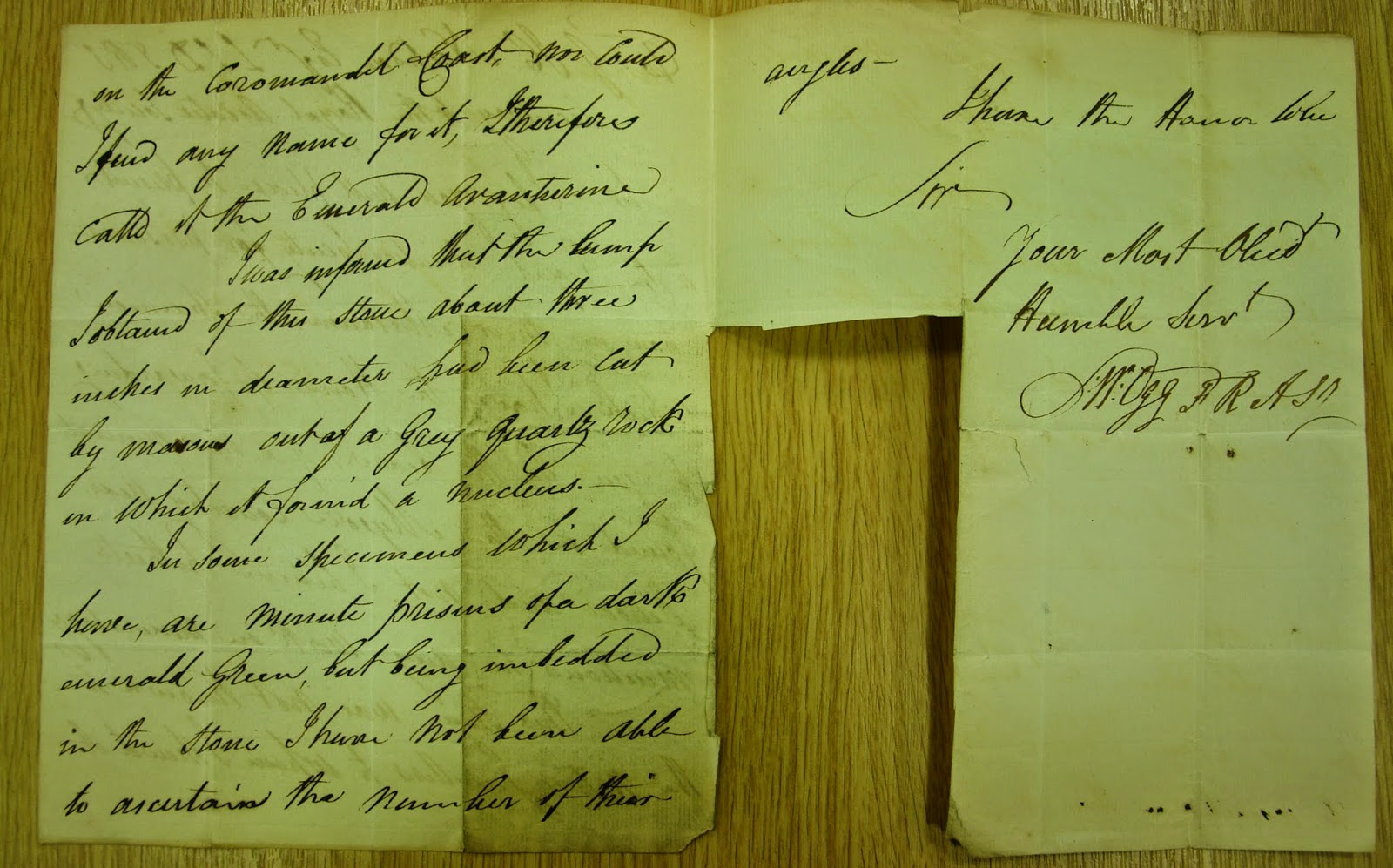 And, of course we have material that pre-dates the Society’s beginnings – as in this book of letters from William Jones. This letter was sent from Calcutta in 1788 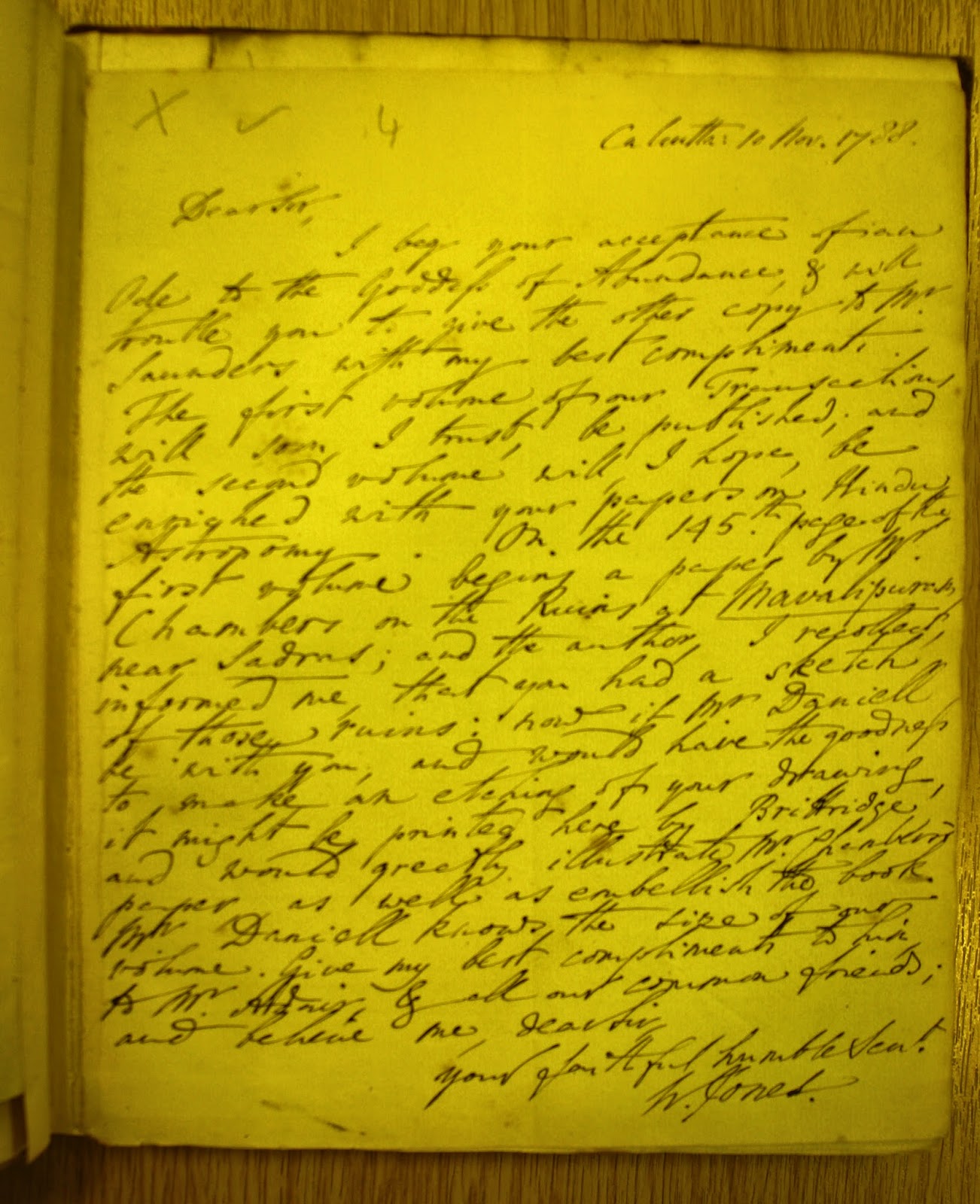 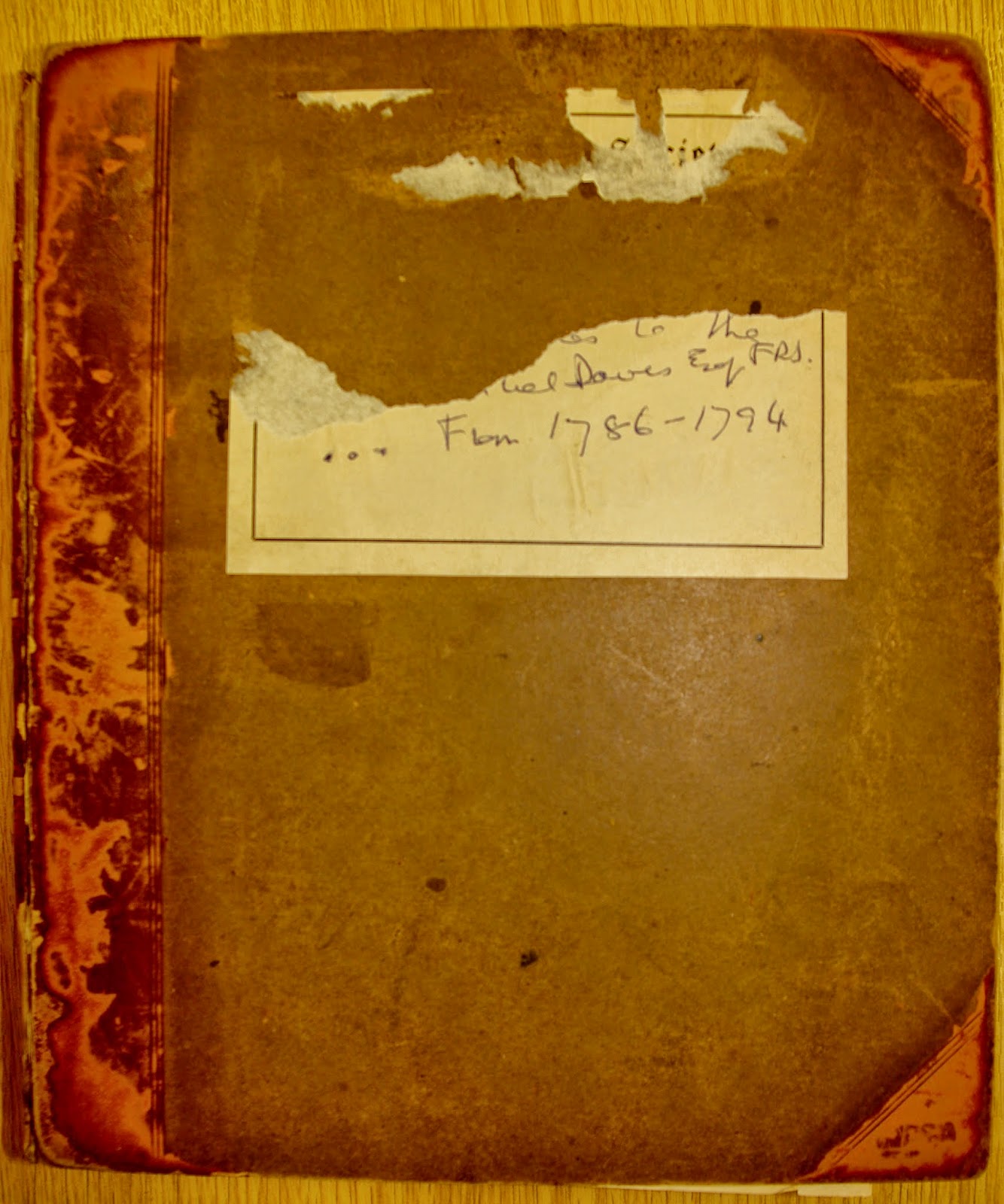 This is just a small selection of the early material, and it is mixed in with material of later dates. So I will start by trying to extract the material that relates to the RAS in the first half of the 19th century and bring it all together. In order to be able to catalogue this material and add appropriate descriptions I’ve been reading about the Society’s origins in the book The Royal Asiatic Society: Its History and Treasures edited by Stuart Simmonds and Simon Digby. My reading has led to a new poem:

Beginnings
March 1823, H.T. Colebrooke
chaired a meeting at the Thatched House Tavern
to found a Society that would look
to further Asian scholarly concerns –
insights with which Company men returned.
Chartered as Royal by Georgian assent,
India Board Wynn reigned as President.

The particular poetic form is Rhyme Royal which I thought was appropriate for the Royal Asiatic Society. This form has a set rhyme scheme, which I have used, but I have to admit to being more loose in its rhythm. It is supposed to be iambic pentameter as used by Shakespeare for his blank verse. Because I had several multi-syllabled words to fit in the poem, I decided not to be so strict.

I am looking forward to getting these initial archives organised  – so I guess it’s time to stop blogging and get back to sorting!