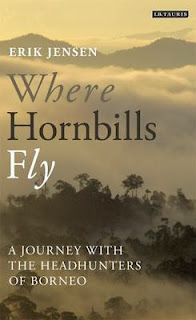 Where Hornbills Fly, first published in 2010 and now reissued in paperback, is a compelling account of the impact of development upon the Iban of Sarawak.[1] By turns thrilling, hilarious and moving, but throughout authoritative and profoundly thoughtful, it triumphs in conveying both the passion of youth and the wisdom of the man of affairs.

Erik Jensen’s involvement in the land of the hornbill came about almost by accident – shaped by idealism, a sense of adventure and chance encounters at university.  In 1959, at the age of 26, he left England on a long journey: weeks by sea to Singapore and on to Kuching (Sarawak’s capital); then days up-river battling with cataracts and shoals until he reached the Lemanak deep in the rainforest.  Here, he embarked on an even longer journey – a journey to understand, and to be understood by, the Iban.  He learned their language and immersed himself in their adat (way of life).  At the same time he organised a scheme to replace deleterious slash-and-burn methods of nomadic rice-farmers with commercially viable agricultural settlements.  ‘Development’ was the mantra of the colonial government which had succeeded the regime of Rajah Charles Vyner Brooke after the Second World War. ‘Development’ was, however, an alien concept and appeared to threaten age-old values.  Nonetheless, Jensen gradually won allies.  He fostered leaders and formed life-long friendships among the Iban.  As his plans took root, he noted ‘a difference in attitude, a new willingness to adapt’ to a changing world.  This, he writes, was the principal achievement of the scheme since the Iban had ‘every right to adapt’.
After three years at the Lemanak, Jensen was appointed development officer for the whole of Sarawak’s Second Division but by 1966 it was time for him to leave.  Sarawak had ceased to be a colony; it had been absorbed within Malaysia and had withstood armed ‘Confrontation’ with neighbouring Indonesia.  Jensen went to work for the United Nations.  His subsequent diplomatic career included UN special missions to Nigeria during the Biafran crisis, to South Asia after East Pakistan broke with West, to Cyprus and East Timor in the mid-1970s, and to the Western Sahara in the 1990s.  It culminated with his appointment as Under-Secretary-General and Special Adviser to the Secretary-General.  At the same time he pursued his academic interests, completing a DPhil at Oxford and in 1974 publishing the first in a succession of books, The Iban and Their Religion (OUP).  In retirement he has been Warburg Professor in International Relations, Simmons College, Boston, Affiliate of the Olin Center for Strategic Studies, Harvard, and Visiting Fellow at the Centre of International Studies, LSE.
During these years Erik Jensen observed from afar ‘disquieting’ changes in Sarawak. Its interests were subordinated to those of Kuala Lumpur, its largest ethnic group (the Iban) lost out to Malays, and its rain-forest was plundered and replaced by palm-oil plantations.   Thirty-seven years after first arriving in the Lemanak, Jensen decided to return, to ‘face the verdict’ and find out for himself  ‘what had been lost and gained’.  This time he flew to Kuching and then travelled to the Lemanak by road. This time parties of tourists were being ferried by river.  ‘The river was still the river’, however, and this, together with so much else, was reassuring.  Jensen rejoiced in meeting old friends and mourned the passing of others, but he found no cause to mourn the past or to regret the present.  Rather he was heartened to see the ‘ever-resilient’ Iban ‘adapting to modern life with their honour intact.’
Professor Tony Stockwell
Vice President of the RAS
[1]   Erik Jensen, Where Hornbills Fly: A Journey with the Headhunters of Borneo, London, I.B. Tauris, 2013, paperback.
Share: